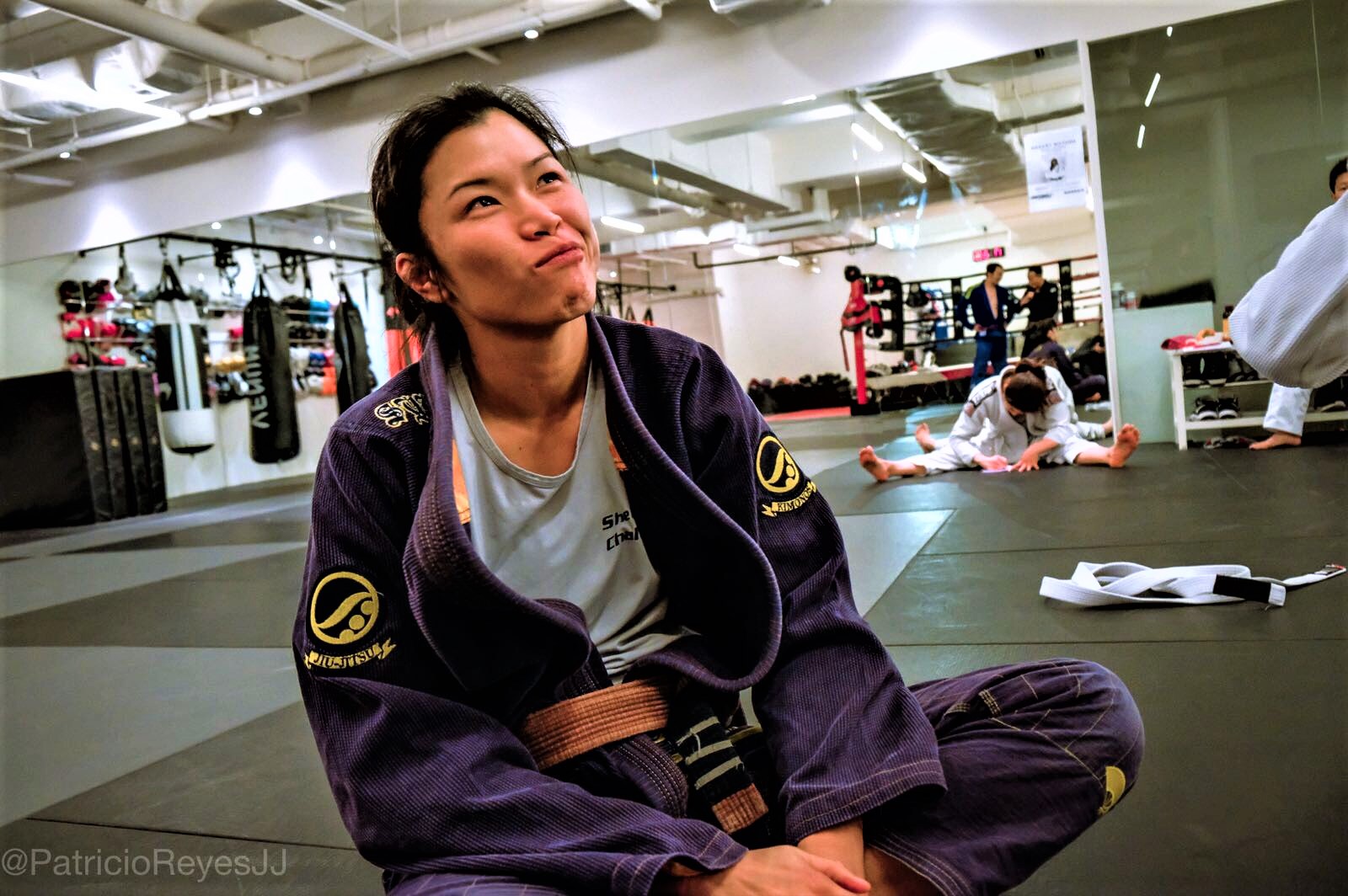 Tesa Ho is Hong Kong’s first female black belt, cookie enthusiast and an all round cool individual. We were lucky to get an interview and garner some insight into her jiu jitsu journey. 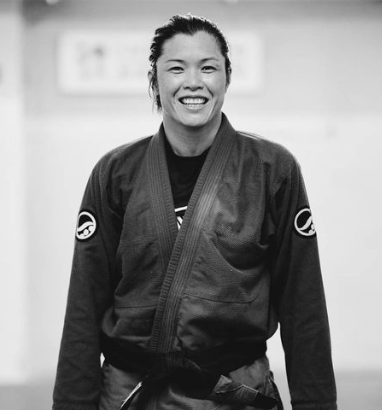 Q: How did you end up starting BJJ?

A:  Itʻs a long story that involves me working at The Bar on Castro and a giant bear and it sounds much better in person.  But since you asked, I was bartending at the The Bar clearing up drinks from the counter and this bear says he wasn’t done and I took his drink.

So I returned it and he drank the remainder then threw the glass and said that wasn’t his drink.  Now, I would ordinarily make him a new drink for free if he asked, but throwing a glass is not acceptable so I kindly informed him that he would have to leave.  He swore and said some not nice things and I started escorting him out of the bar.

While we were walking towards the door, he grabbed the back of my neck to pull me closer to him and that’s when I grabbed his throat and said “You don’t fucking touch me!” and all the queens gasped and suddenly started snapping fingers and saying that they got my back.  I finally pushed the bear out and my bouncer took care of him but that’s when I decided that my black belt in taekwondo wasn’t worth much in a crowded space.

I had biked passed the Ralph Gracie Academy on Valencia Street every day for the past few years but thought the guys were too gnarly looking but the next day I walked in and signed up.  Kurt Osiander gave me a gi and told me to get on the mat and train and that was that. 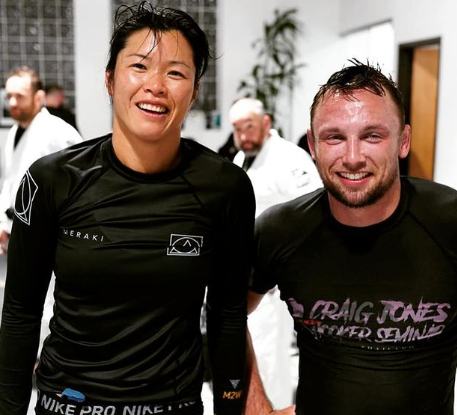 Tesa introduces the sport of jiu jitsu to our Antipodean friends

Q: Now that you’ve achieved black belt status what are your goals in the sport?

A:  Black belt is just the beginning, there is still so much to learn and to progress for my own jiu jitsu.  Personally, I would like to compete more and win a few more old lady gold medals.  But I recognize the responsibility that comes with being a black belt and I would like to help develop and unify women’s jiu jitsu in Asia.  I had so many upper belts to train with and look up to when I was starting, and I’d like to be that role model here in Hong Kong and Asia.  Even now, I see how my idols are giving back to the community and I would love to be able to do a fraction of that.

I’ve organized a few seminars in Hong Kong and would like to continue bringing world champion fighters and professors to Asia.  It would be awesome to see jiu jitsu to become a sport in the Asian Games and eventually the Olympics.

Q: Who are your role models in the sport? 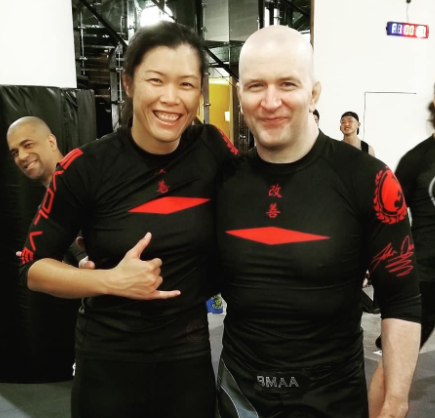 Tesa with some random bald man

Q: How many cookies can you consume before you are unable to roll?

Q: Did jiu jitsu save your life? Changed your life at the very least?

A:  Jiu jitsu has not saved my life yet although there’s still a lot of time for potential life threatening situations.  But I’ve made awesome friends all over the world and have gone on some crazy adventures some of which can not be discussed without a lawyer present.

Q: What is your life outside of BJJ like (does that exist?)? Do you do any other sports or activities?

A:  If I had a life outside of BJJ, it would involve surfing and fishing (yeah Iʻm super Hawaiian like dat).  Iʻm also really good at taking naps. 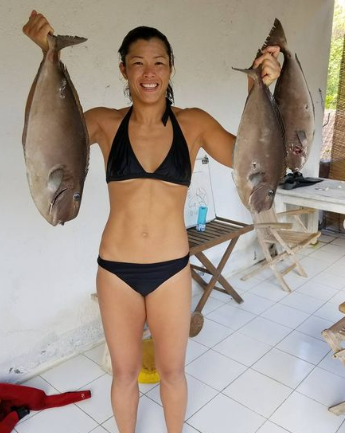 As ruthless on the mats as she is on marine life

Q: How was women’s BJJ changed since you started training? For the better? For the worse?

A:  Wow, women’s BJJ has changed so much since I started back in SF.  When I first started competing there was no medium heavy weight class (it was 150 lbs to infinity) and there were no masters.  There were 2 belt categories: white + blue, and purple + brown + black.  I would often be fighting 200 lb girls.  There were about 4 major tournaments in California when I started (Pan Ams, Mundials, American Nationals, US Open) and a few regionals.

It’s amazing to see women able to make a career out of jiu jitsu now.  There was a time when the top American women stopped competing as black belts (i.e. Hillary Williams and Kay Stephenson) because they started focusing on their careers and lives.

I think women’s BJJ has only gotten better with time and the community is stronger than ever.  There are women’s only camps and women’s instructors / gym owners.  It’s really been an amazing to watch the evolution of the sport. 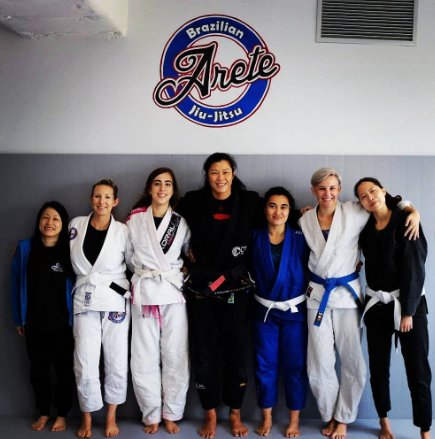 Q: Have you had to face any challenges in jiu jitsu specifically because you are a female? If so, please elaborate.

A:  There were a few schools that I visited that wouldn’t let me train because I was a girl.  That’s the old school mentality.  It happened when I was a blue belt visiting Ricksonʻs academy in LA, they told me I had to come back for the women’s class and that I wasn’t allowed to even watch the class Kron was teaching.

I remember calling up Jr (Carlson Gracie Jr) and being furious and he told me to come train with him at Temecula so I drove 2 hours in LA traffic to go train.  When I got there, he was getting a massage so I ended up rolling with this skinny teenager – Alexis DuFresne.  She kicked my ass by the way. 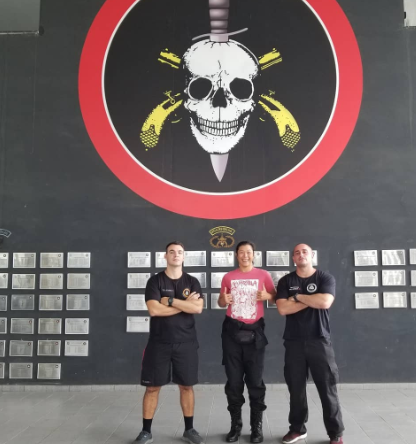 Q: How important do you think competing is, if you want to be great at Jiu Jitsu?

A:  There’s a lot of great jiu jitsu players and coaches that have never competed (John Danaher is an evil jiu jitsu mastermind).  It’s not necessary to develop your game but I do think it helps speed up the process.  Competing for me keeps me motivated and pushes me to keep learning since sports jiu jitsu keeps evolving. 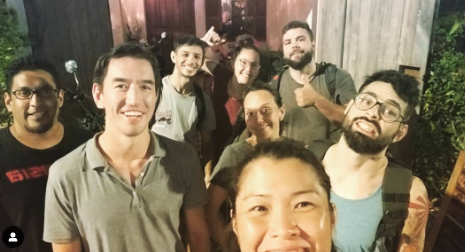 Q: What differences have you noticed, if any, between BJJ in Asia vs. other parts of the world?

A:  The guys are smaller and more technical in Asia.  In the US, there’s more wrestlers so BJJ there has a lot of wrestling influence.   The Aussies are strong and stubborn mutherfuckers (edit the swearing please).  They are really tough.  You’re starting to see the rise of the Aussies in sports BJJ.

Brazilians are aggressive and athletic, the competitors there train all the time so the sport evolves.  I haven’t really trained too much in Europe yet, but everybody there seems big and strong.  Should I make more sweeping generalizations about races? 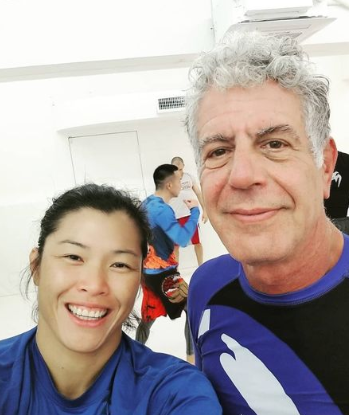 Q: What drew you to move to Asia, specifically Hong Kong, in the first place?

A:  My jobby job.  I’ve been adulting hard for awhile.

Q: What is your best piece of advice for our readers who are starting out on their BJJ journeys?

1) Donʻt be a dick.  Youʻll never last and people will smash the shit out of you.

2) Keep training.  No matter what you feel like, how bad you think you are, you just have to keep training.

3) Wash your gi.  No one likes ring worm and you donʻt want to be THAT guy/girl.

4) Be kind.  This should have been taught in Kindergarten but better to learn it now I guess (shoulder shrug emoji).

Thank you so much for your time, Tesa. We really appreciate it. Congratulations again on your black belt, and we look forward to seeing more great things from you in the future! Feel free to add anything else you would like to include below (funny anecdotes, extra questions, etc.).

A:  No problem, thank you BJJ Asia for supporting jiu jitsu in Asia and liking my Instagram photos (winky emoji). 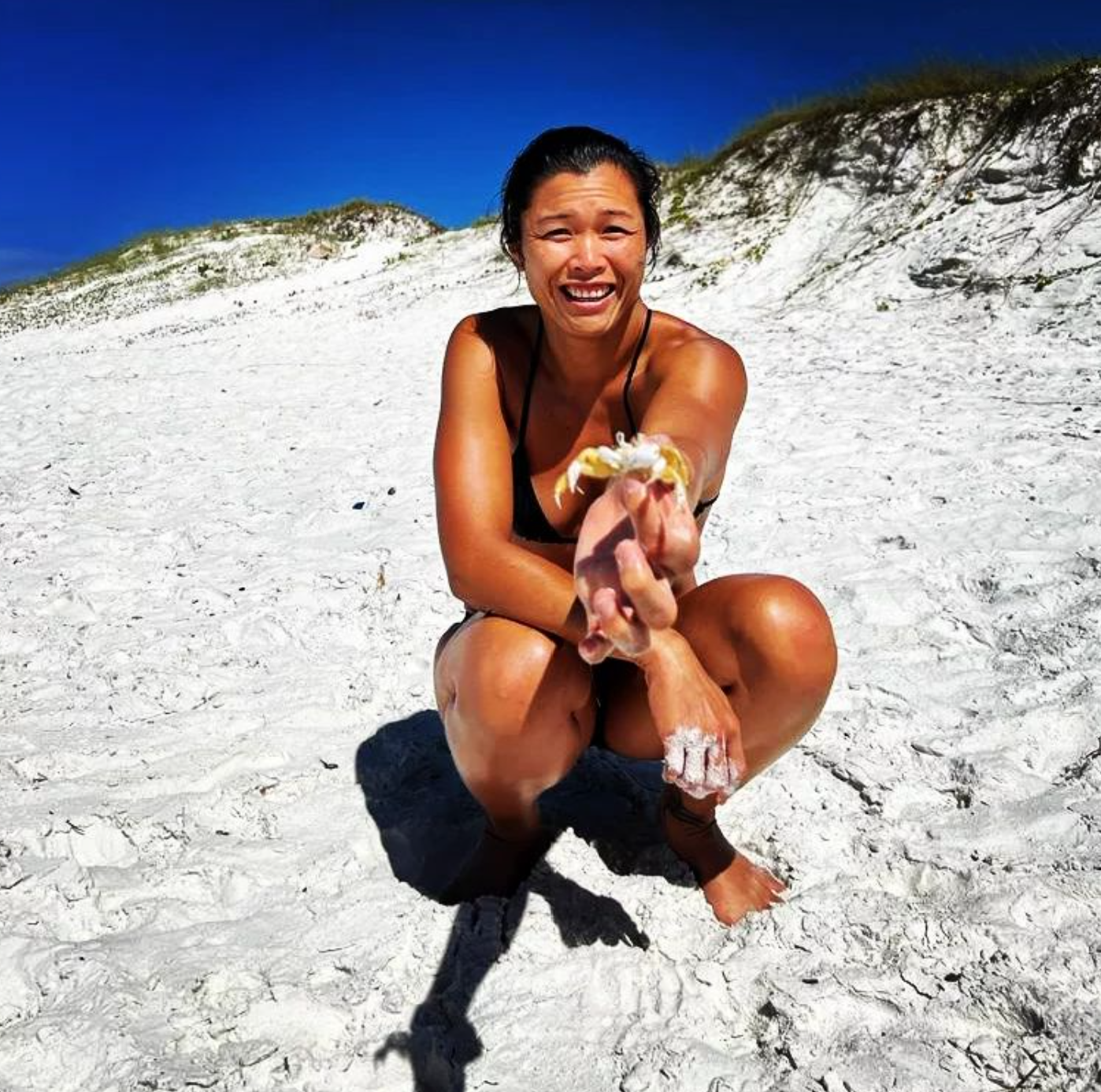 A:  Jr took me to a place in Copa Cabana that serves the legit Acai from the Amazon.  Itʻs nothing like the sweet sorbet that everyone knows.  Itʻs tart a bit like poi and much more soupy.

A:  Mint Milanos are my go to from the store.  But a crispy, yet chewy homemade dark chocolate chip cookie is always a winner.  Ginger molasses and sugar cookies with those giant sugar crystals are good too.

A:  Iʻm a gi whore.  Since Iʻm tall and somewhat skinny (depending on how many cookie I have eaten), the best ones that fit me are: Shoyoroll and Day x Day (Hawaiian brand cheeeee!). 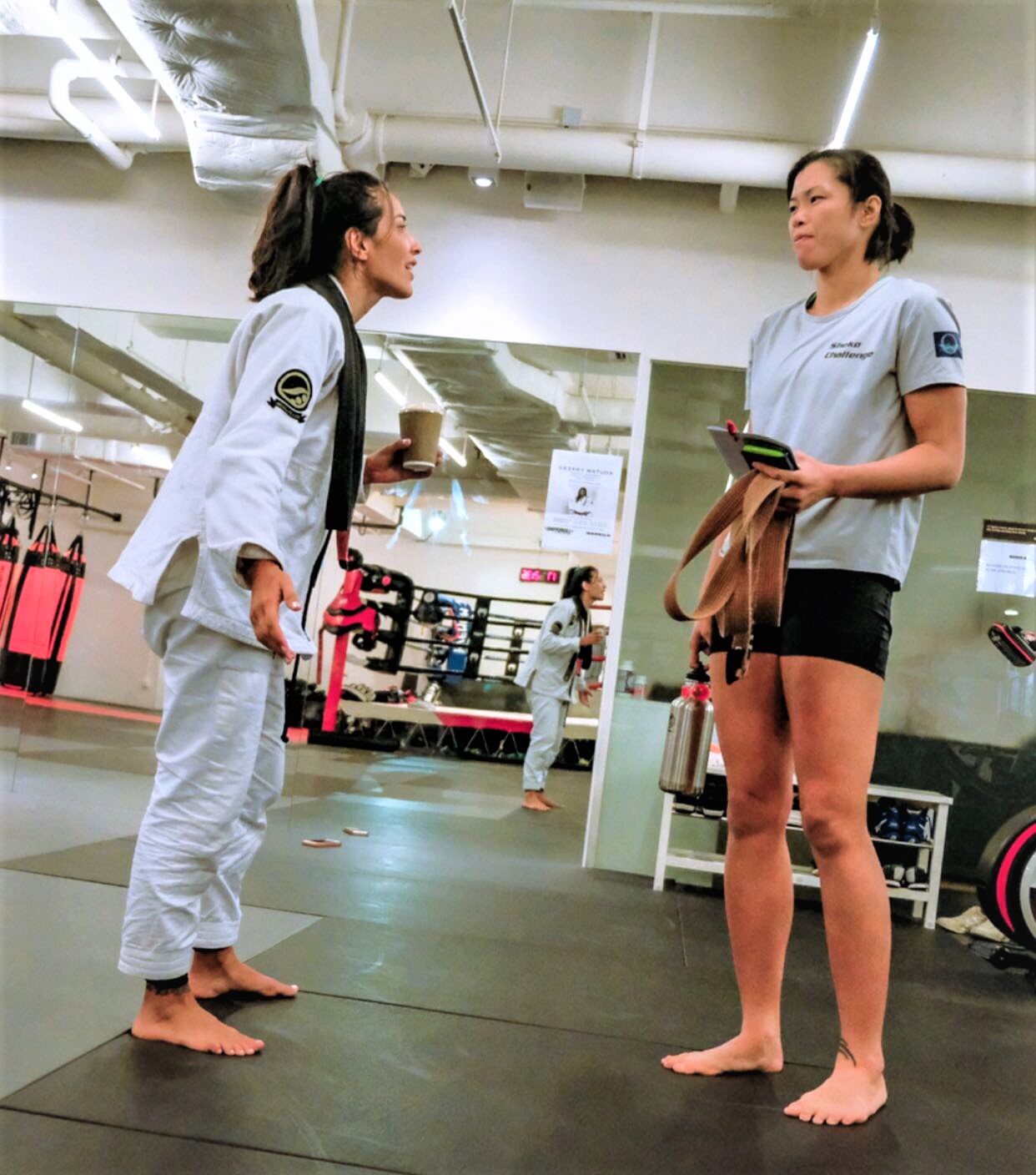 More information and interviews with Tesa can be found at links below:

Check out the current sale at Tatami using the link below.