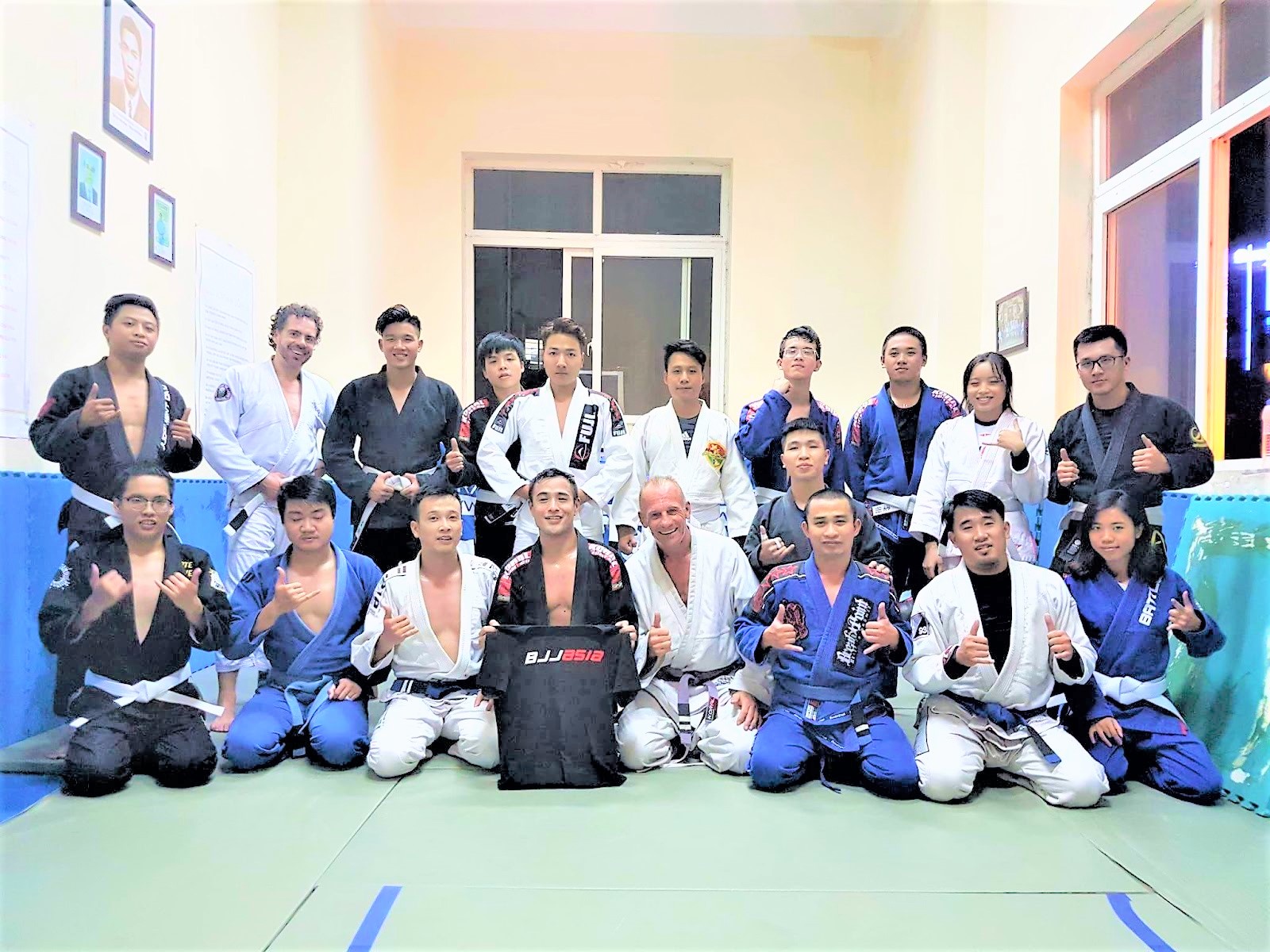 Hanoi, the Northern most city in Vietnam was on my list as a travel destination for a while and I didn’t think I would be lucky enough to visit the place so soon, but as luck would have it a business trip facilitated this.

I was however told that due to business dinners every night I would not have any time for tourism or BJJ. As I swallowed this bitter pill I did what any rational person would do and did not pack a gi (rookie error, always pack a gi) and just packed some workout clothing for the hotel gym. Painfully aware less than 3 kilometres away Hanoi BJJ would be holding classes during my stay. 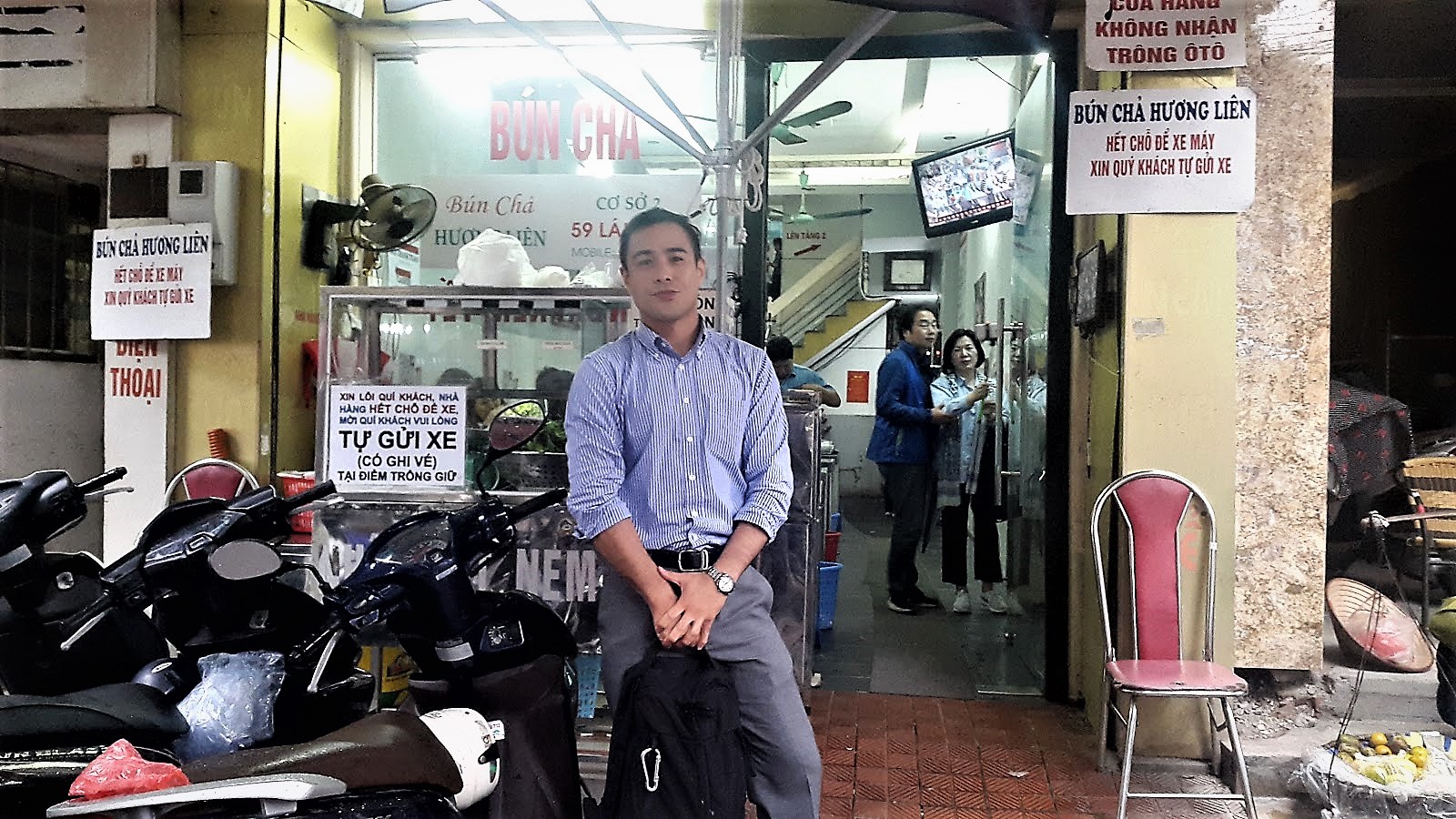 Upon arrival in Hanoi we were driven from the airport to a restaurant called Bun Cha Huong Lien, a restaurant made famous by the former President Mr. Obama and TV chef Anthony Bourdain having had dinner there during the former President’s Asian Tour. Due to this visit the restaurant is packed from open to close with tourists and since the famed visit, has on the menu the “Combo Obama”; which is a simple bowl of Bun cha, a fried seafood roll and a Hanoi beer which Mr. Obama ordered when he visited the restaurant.

We were seated below a portrait of Mr. Obama and Bourdain enjoying their meal and did the same and the food did not disappoint. With a belly full of vermicelli and a slightly red face (Asian glow) from the one beer we left the restaurant and headed to the hotel to get settled before a business dinner. Having little to do and a Vietnamese coffee downed with 3 hours to spare I got in a workout at the gym. With the workout done, then the business dinner finished, I went to sleep ready for the next day of business in Hanoi. 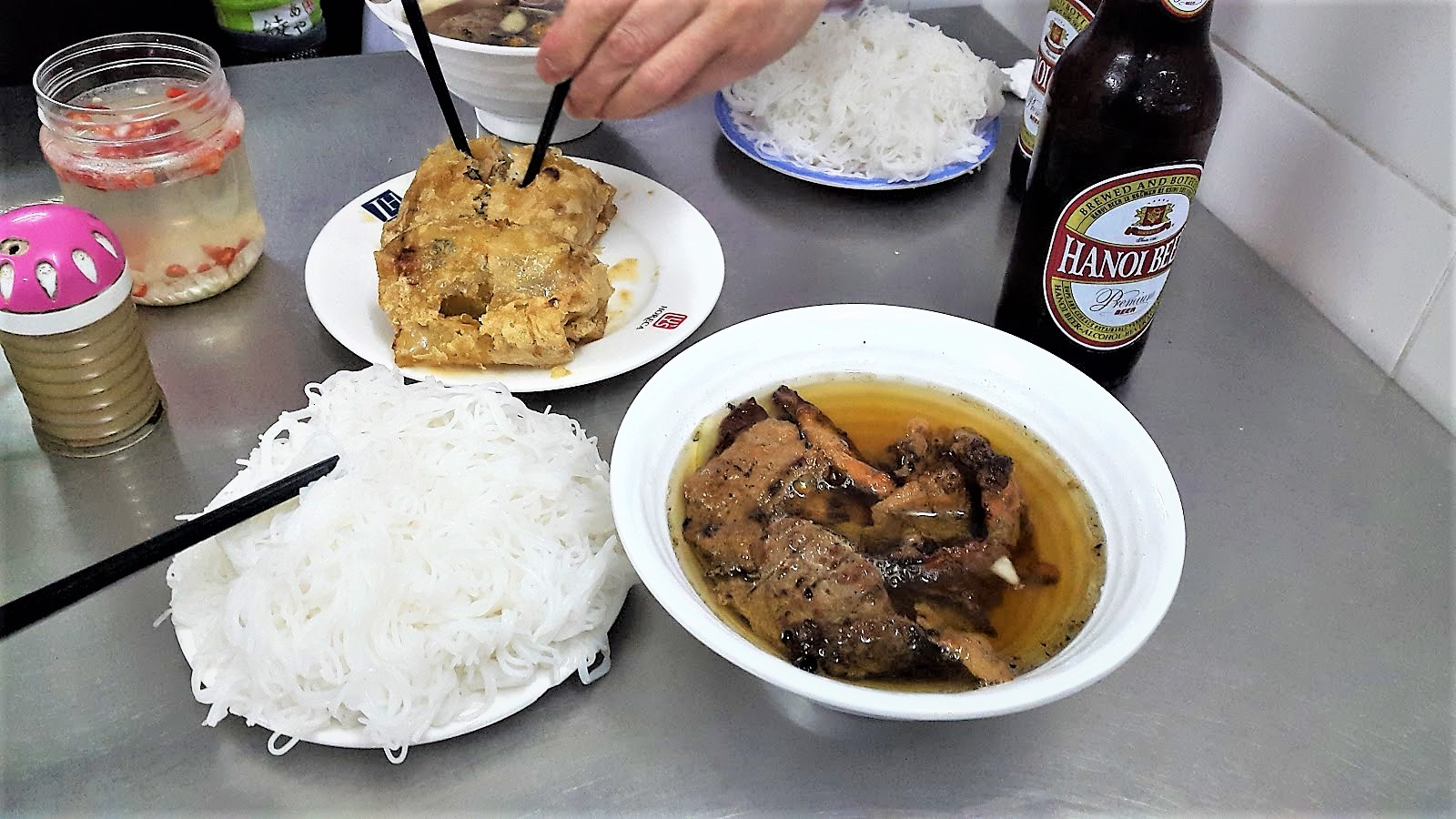 The next day after interviewing potential new foreign staff I was informed that the president I was supposed to have dinner with that evening had come down with dengue fever and would not be able to attend dinner. Given that I had not brought my gi I just accepted the fact that I would get some additional gym time and have another dinner with the staff I was already with.

As luck would have it, I was given the green light to postpone dinner at a later time and do some training at Hanoi BJJ, so I packed my basic workout gear and headed to the gym.

As I was staying at the hotel Nikko in Hanoi, the gym was close at approximately 2.4km from the hotel to the Centre of Sports in Dong Da District. We were in rush hour however so it took a little under 30 minutes to the facility. If you have seen the traffic in Vietnam you know that roads at rush hour are like a running river of honking cars and bikes. So if you are heading to class I would highly advise a little forward planning prior to heading there.

I arrived to the building with some time to spare and to my surprise the building and courtyard was vibrant with children and adults of all ages practicing various martial art disciplines. Some in the courtyard, some in classrooms and on the second floor where Hanoi BJJ was located there were children drilling kata in the hallways under the watchful eyes of instructors.A little after the time when class is supposed start the coach, Tran Tuan Anh rushes past those waiting to get into class and opens the doors to the gym and proceeds to clean and set up mats with his students. By the time the class begins (18.45) the mats are overflowing with about 20 students including 3 guests and all are eager to train.

The students get changed on the mats and before long everyone is ready to train, starting with a little warm up. One of the students Phong, rocks up a little later and loans me a gi (Thank you again) for training and we begin drilling some back take drills with Coach Tran showing some variations from side control to the back.

The coach’s emphasis on the little details was impressive and after the drills were completed we proceeded to have 3 minute sparring rounds starting from the back position. From the students that I rolled with it was clear that the students’ fundamentals were good and all had back their defence and offense on point.Not long after the 3 minute rounds were changed to 5 minute rounds and we proceeded to roll until the end of class.

It was great to roll for a good hour with the students of Hanoi BJJ and Coach Tran led by example and rolled with me in the last round of class which was a very tough back and forth. The class ends with a group photo and the blue belt student Phong gives  me a Hanoi BJJ T shirt. Most of the students by this point filter out of class with some students staying behind to drill technique. I thanked Coach Tran and the students at Hanoi BJJ exhausted and elated I got to train in Hanoi and bid my farewells. 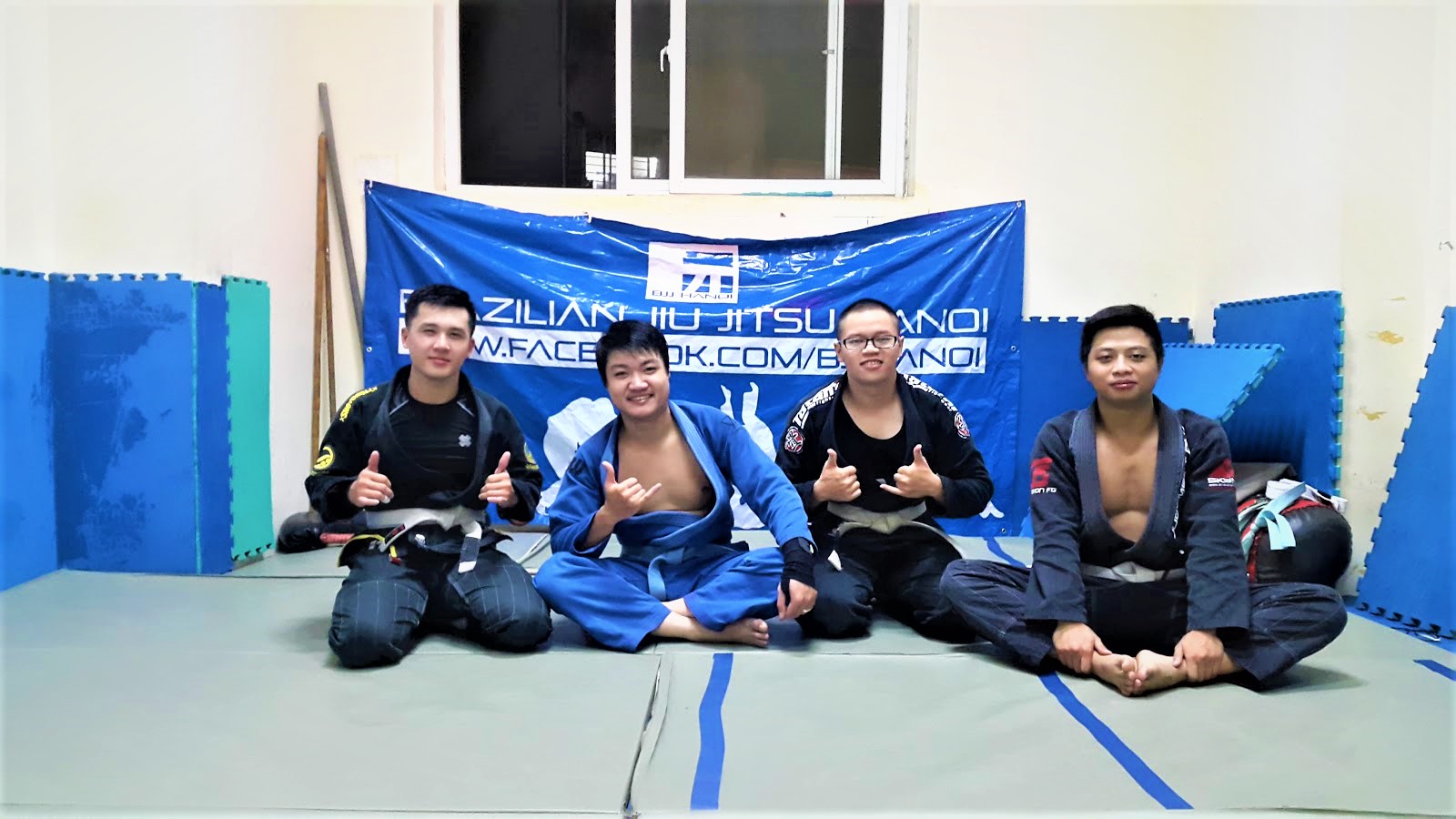 Hanoi BJJ is a nice local gym with friendly students and a welcoming coach. Thanks to Hanoi BJJ for the warm welcome, the rental gi and the t shirt! If you’re in town and have a chance to train I would highly recommend a little drop in to train with these guys, (coloured belts train for free) the gym can be contacted through email, their own website and Facebook and respond very quickly to any inquiries you may have. Coach Tran’s only request is that you enjoy your rolls and train safely. 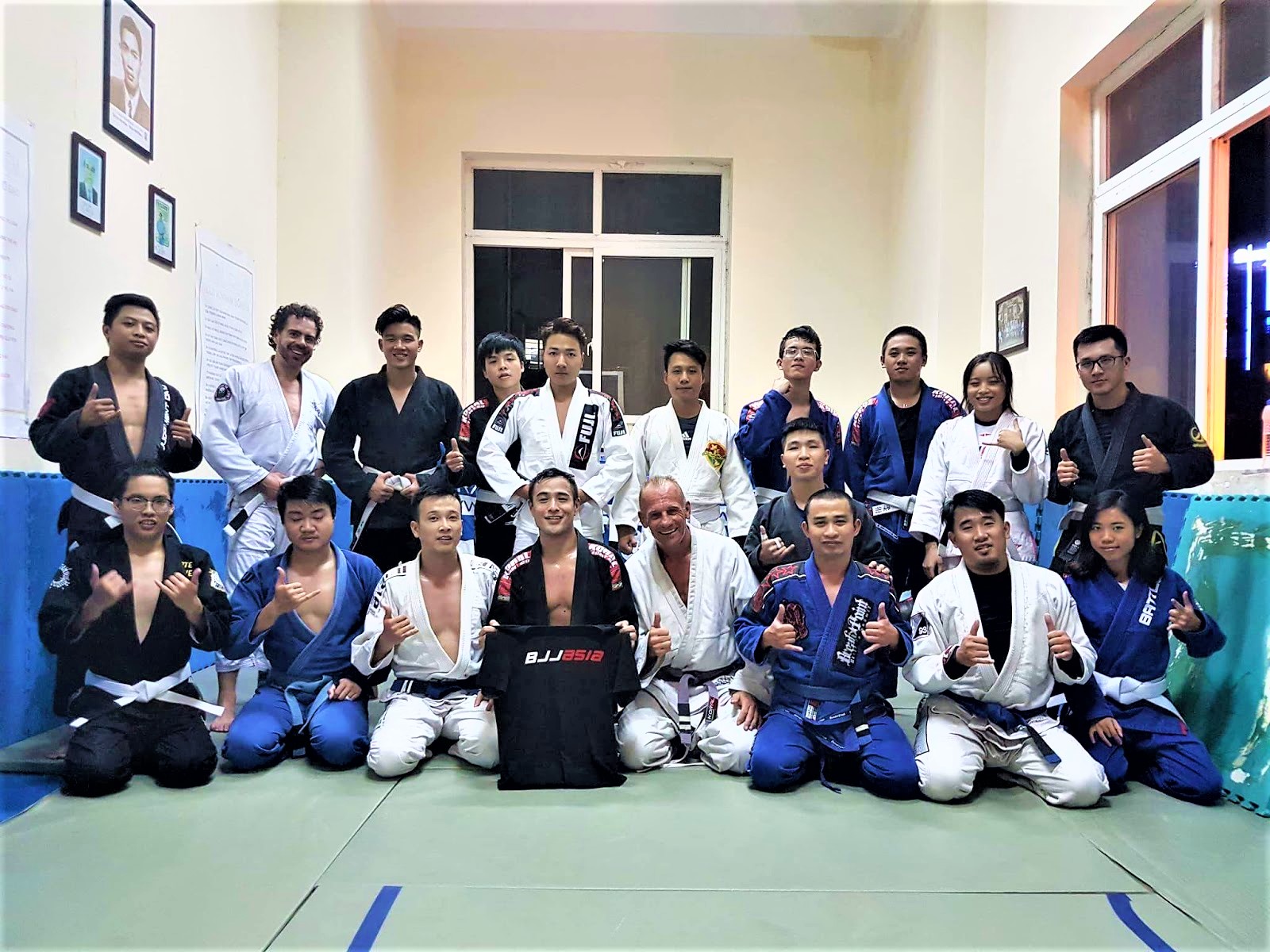