Raising the Black Flag in Okinawa 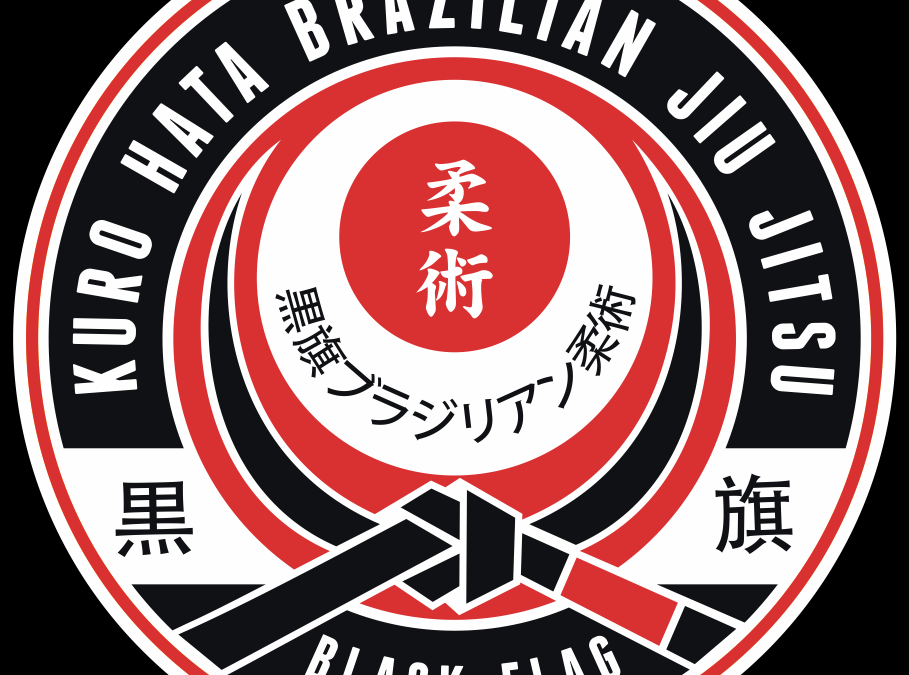 Michael Cates is a Black Belt under Ricardo Guimaraes of Gracie Humaita Team. He has lived in Japan for over 13 years and also holds a 1st degree black belt in Kodokan Judo. He has recently established his gym, Kuro Hata BJJ in Okinawa, Japan. 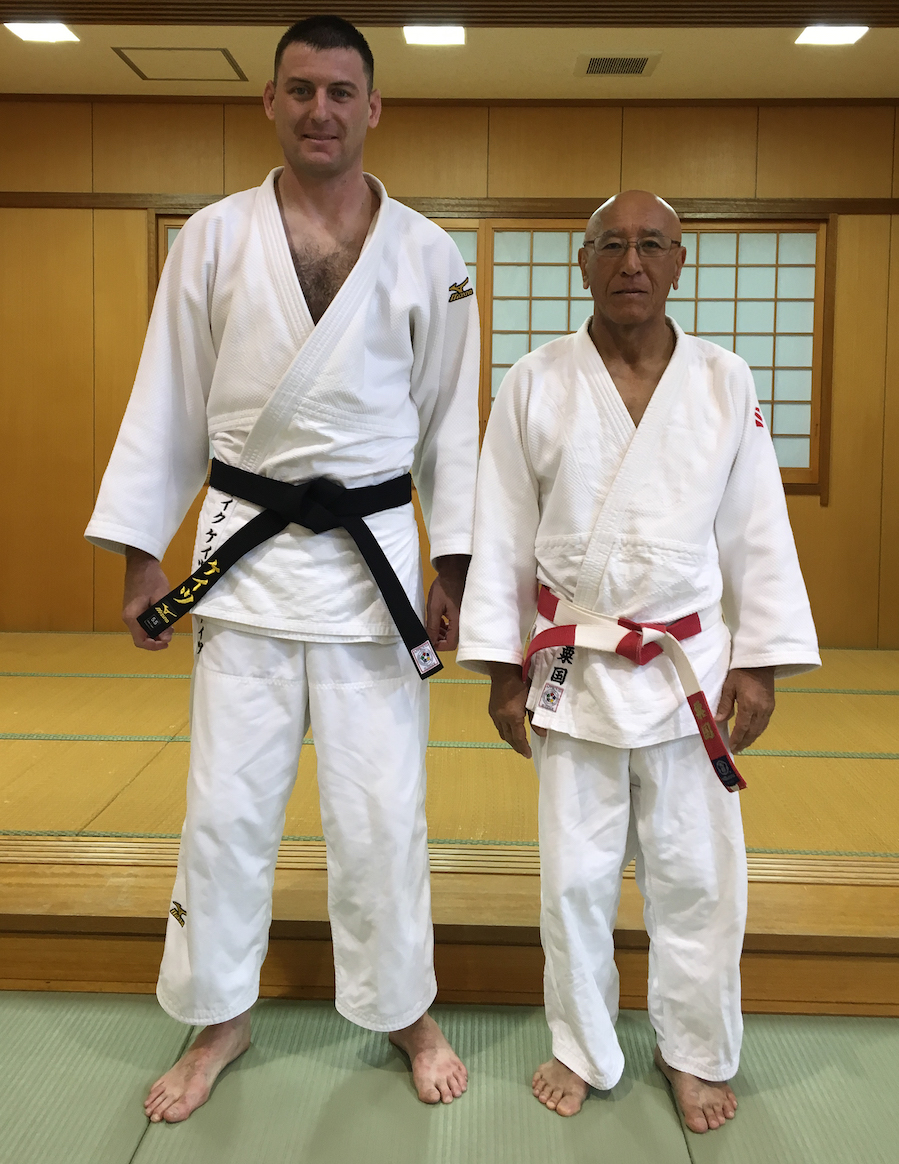 BJJASIA: Firstly, the name “Kuro Hata”, which literally translates to Black Flag in English does it have any relation to the Punk Rock Band? Why the name?

MC: Haha, I get asked that a lot! Even though sometimes we roll to some black Flag playing in the Background it is not the inspiration for the gym name.

The name has a few meanings, firstly the Black Flag kind  of represents rebelliousness, chaos, breaking away from the norms… so that’s a big piece of it “ sometime you just need to raise the black Flag!”

Secondly Okinawa is hot and humid… The US Marine Corps use a flag system to indicate when exercise and training should not be performed outdoors for safety (think heat stroke conditions).

The Black Flag signifies the temperature is over 90 F or 32.2 C with high humidity… So here on Okinawa we are at black flag status almost half of the year!

At Kuro Hata we don’t care about the flags and continue to train regardless of heat. Most days when rolling inside the gym it feels like Black Flag conditions!

BJJASIA: How did you end in up in Okinawa, were you stationed there?

MC: Well I first came to Okinawa in January of 2001. I was 19 and just joined the US Marine Corps and got sent to Okinawa for my first duty station. That first time here I met my wife and later on we decided we wanted to retire and live back on Okinawa, so here we are!

BJJASIA: Where else have you been stationed?

MC: Being that I was an Aircraft mechanic (specifically a CH-46 Helicopter Crewmen/ mechanic, and later a MV-22 Osprey Mechanic) There was very few places that I could be stationed. So I ended up doing my whole 20 year career stationed between Okinawa and San Diego. 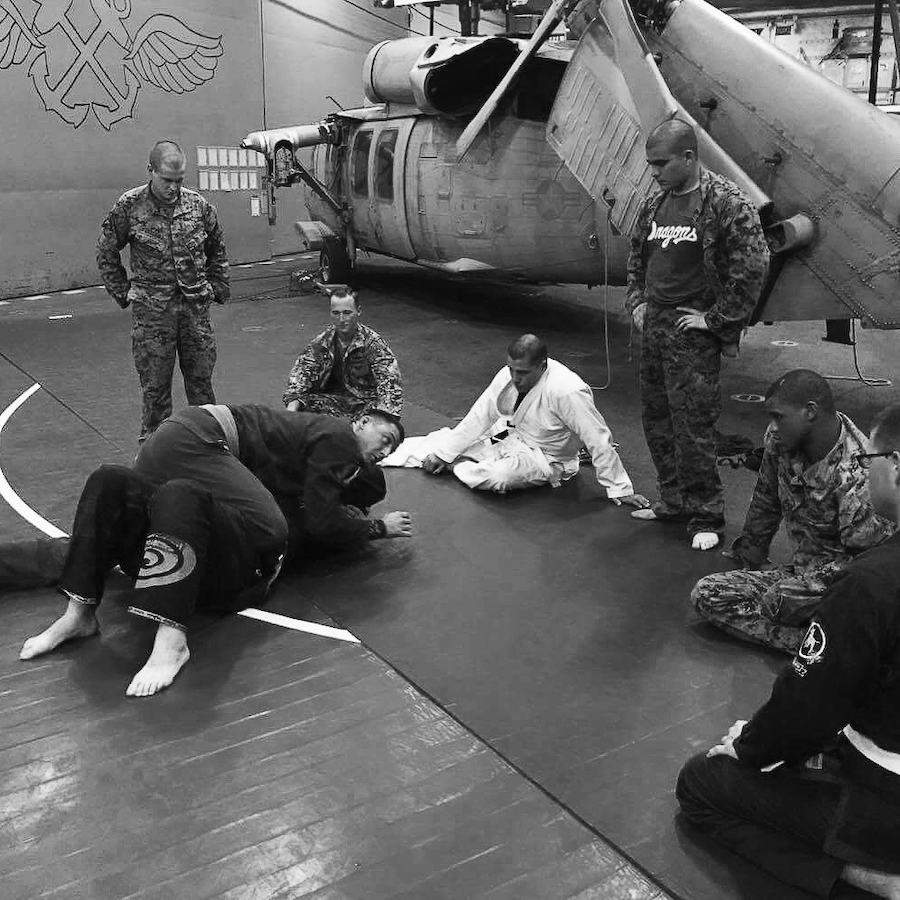 A Mechanic in Life

BJJASIA: What got you into Jiu-Jitsu initially?

MC: So in the military we would have to practice their version of martial arts, it was a combination of lots of different fighting styles borrowed from several different marital arts. At that time I really had no clue about fighting, martial arts, MMA, etc. After a class I was talking with my instructor and commented that I really enjoyed the ground fighting portion of what we were doing, so he told me I should go and find a gym off base and try it out…

I was like “there are gyms that only do ground fighting?” He looked at me like I was crazy, laughed and said “Google Brazilian Jiu-Jitsu” I did, and found Ricardo’s gym not far from where I was living, I went and tried it out and the rest is history… 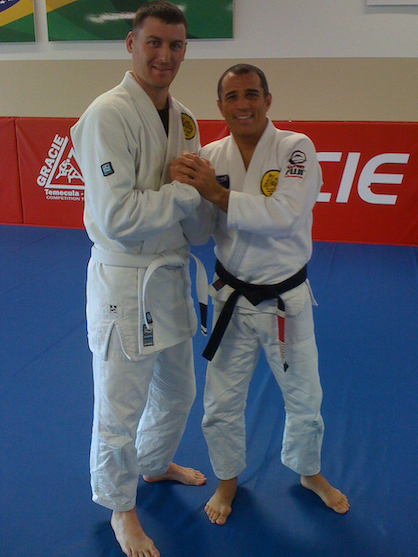 We all start from White Belt

BJJASIA: What was your impression when you started Jiu-jitsu?

MC: Man when I started I got smashed for so long… I am tall and skinny and felt like I could do nothing right… years of playing basketball and running track were completely useless for grappling…

Professor Ricardo is a lot smaller than me but would wreck me and everyone else in the gym. (still does), I was like this guy whose a lot older, smaller and lighter is controlling and submitting these guys twice his size and half his age, I want to learn what he knows!

So it had me coming back everyday… 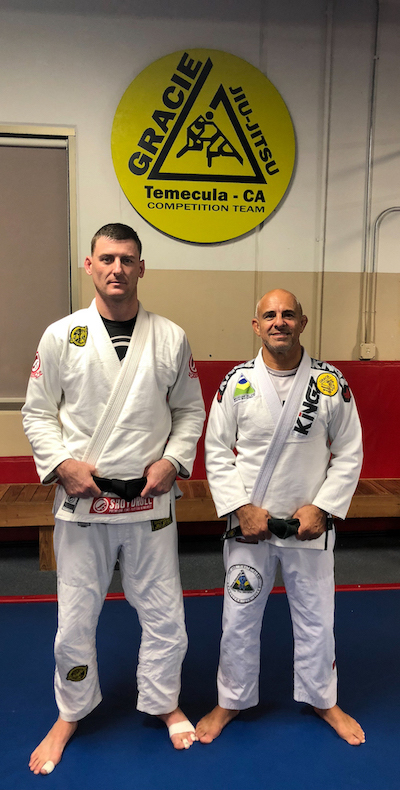 The Master & his Apprentice

BJJASIA: As a former Marine what lessons to carry over into your Jiu-Jitsu. (Your rolling style, your mentality, how you conduct lessons.)

MC: There is a lot to this question! There is a saying in the Military “Always train your replacements”  so I was always teaching in the Marines, teaching juniors how to work on the planes, how to be a crewman, how to work together as a team in the helicopter, service and employ weapon systems, etc.

So I basically had 20 yrs of practice teaching and learning how to get different people with different learning styles to understand the material being taught. This very much carries over to how I teach Jiu-Jitsu, if you don’t understand the first time I show or explain something then I will try different approaches until you understand it.

As for my rolling style I adapt it to the person I am rolling with, if its a Japanese guy that has some judo experience I submit them with my guard, if its big military guys that come to train and know a little bit, but still think that their strength will save them… its mount and control till they see they can’t bench press their way out… Adaptability is a very big piece of being successful in the military and this trait very much carries over to my Jiu-Jitsu. 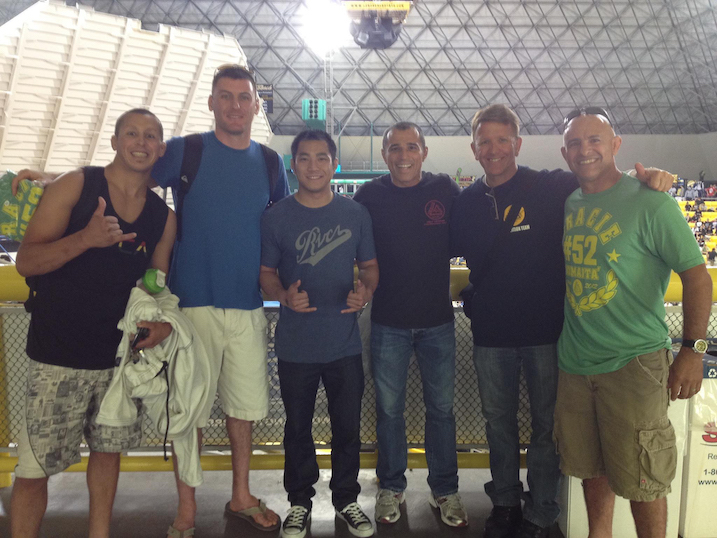 BJJASIA: How do you find the training environment in comparison to other regions of Japan or for that matter the US?

MC: Okinawa has a very young BJJ Scene, when I came back to Okinawa for the second time in 2014 there was only 3 maybe 4 BJJ blackbelts in Okinawa and only a handful of places to train… fast forward to now and there are a dozen black belts on the island and it seems like there’s a new gym popping up every year.

In the past the BJJ scene here was really driven by the US military population stationed here, because of that there is a very transient feeling to BJJ. Its hard to get highly skilled talented players to stay and raise the level here, but fortunately the local population is starting to get more and more interested, and in the next 3-5 years there will be a lot local practitioners getting promoted up to black belt which will accelerate the growth!

The United States is so far ahead of everywhere outside of Brazil that its hard to compare… In places like Nagoya and Tokyo, there are some awesome gyms and teams that are quickly rising in talent and skill, but the rest of Japan I feel BJJ has not gotten popular enough to pull the Kids from baseball, soccer, or judo. So the majority of athletically gift kids are still not getting in to BJJ, which makes the scene a much older crowd than in places like the US. This older crowd have lives, careers and family out of BJJ so they do not compete or train at a level that brings visibility to the sporting side of Jiu-Jitsu. 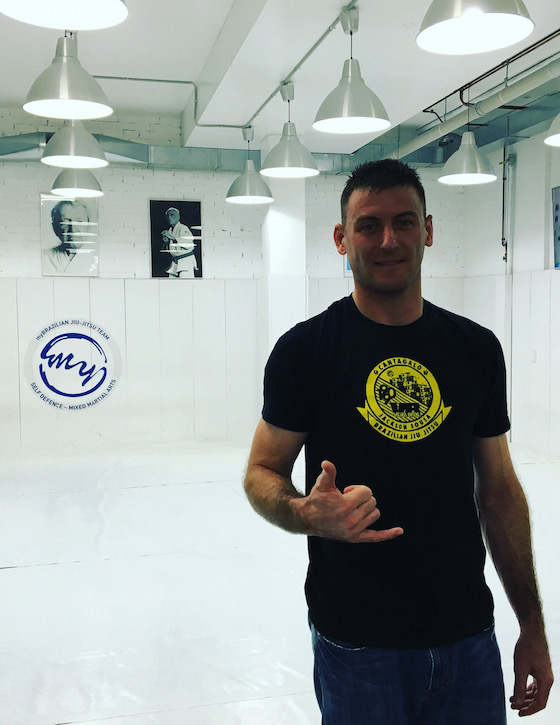 BJJASIA: When did you officially start coaching? Which belt, where, how did the transition from student to coach feel?

MC: My first coaching experience was covering some kids classes a few times at Gracie Humaita in San Diego as a purple belt. But I didn’t really start to teach regularly till I moved back to Okinawa in 2014, where I started teaching a couple times a week on the base. After a couple years I started teaching nearly everyday, up to now were I am teaching close to 6 hrs a day, 6 days a week.

When I first started I was not all that sure of myself and would only teach my best techniques, as time went on I started feeling like I was doing a disservice to my students as they would lose to other styles different from my own in competition.

So, I started to make a concerted effort to teach a much more broad variety of techniques and styles to help my students see more of what is out there. Due to this, none of my student are carbon copies of my style, and they are discovering their own Jiu-Jitsu! We have a lot of variety in the team which make every roll unique and more fun! 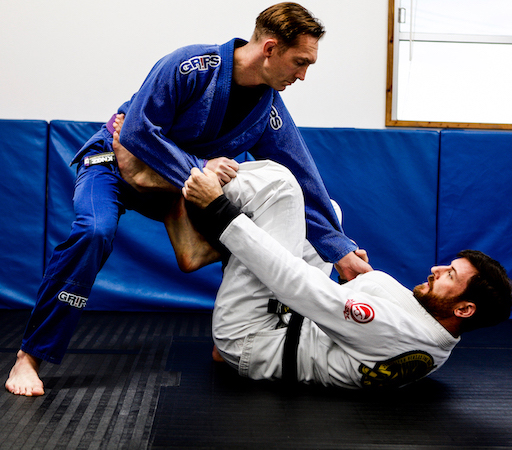 BJJASIA: How do you prepare for competitions? We saw you train at a gnarly CrossFit gym in Okinawa.

MC: I do train at CrossFit Asia, but I am just a lowly white belt at CrossFit, I started it recently. I do not know how it will effect my comp training yet, but I will say that it has definitely given me a larger gas tank when rolling!

When it comes to getting ready for a competition my mindset shifts and I stop trying to add new things to my game and just polish my “A game” techniques. I add more rounds during each training session, less rest between rounds, having fresh training partners each round, and lastly lots of starting in a bad positions, having to defend, recover then go on the offensive. 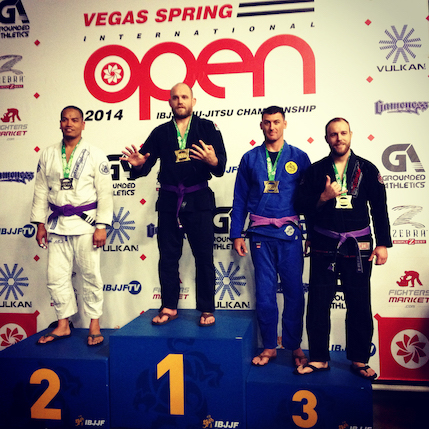 BJJASIA: Out of all the competitions you have entered so far what was the most memorable victory? This can be at any belt level also.

2013 Abu Dahbi World Pro Trials San Diego, I was a blue belt and only got 2nd place, but it was the most memorable to me. 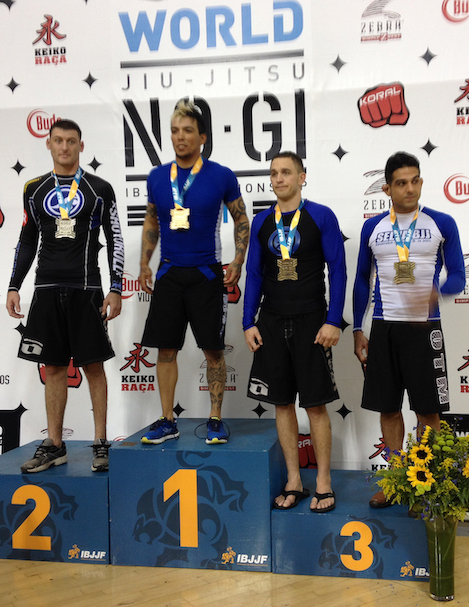 BJJASIA: Why was this competition so memorable for you? 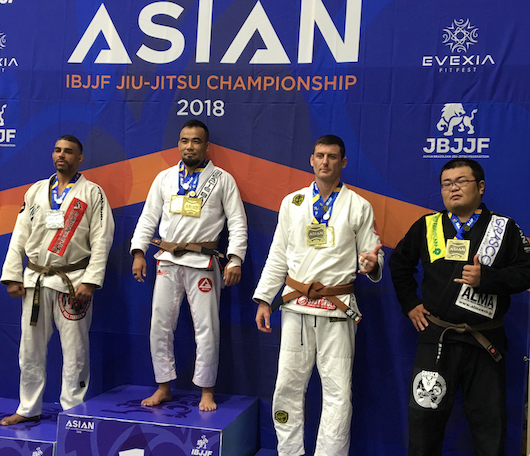 BJJASIA: Out of the places you have trained outside of your current home gym which gym left the biggest impression?

MC: Even though I have trained all over the world,  Prof. Ricardo’s school Gracie Temecula will forever hold the position of biggest impression on my Jiu-Jitsu.

The training partners and family feel that place has is still something very special to me… I have been looking for that feeling ever since I left Temecula.

Outside of Gracie Temecula, every gym I have walked into has left an impression on me and I have always learned and taken something away from them. 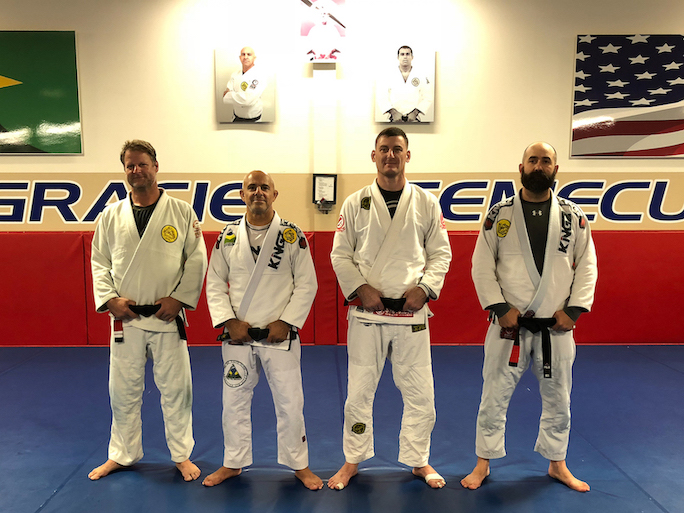 Home is where the heart is. – Gracie Temecula

BJJASIA: What do you think of the current level of Jiu-jitsu in Japan?

In my opinion, Japan struggles with the general population understanding what Brazilian Jiu-Jitsu is, every one in Japan knows Judo and Karate but are not sure about BJJ. Until BJJ becomes more mainstream and draws Kids away from the more traditional sports, Japan’s BJJ will always be chasing other places. Kids, teens, and 20 somethings are the innovators! 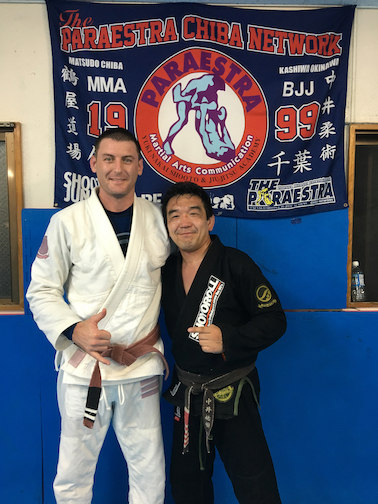 MC: Asia as a whole.. I would say its growing quickly just about everywhere. Next to Japan, I would have to say South Korea. I was surprised when 5 or so years ago when I was in Busan riding a Train heading to Young Am Noh’s Gym ‘Jiu-Jitsu Lab,’ I am watching a tv on the train showing a public news channel, it went to commercials and one commercial was for an upcoming BJJ tournament!

This blew my mind that BJJ was popular enough in South Korea that they were showing commercials for it on TV.  Since then Korea had the Spyder invitationals and some other bigger tournaments with several gyms popping up all over! 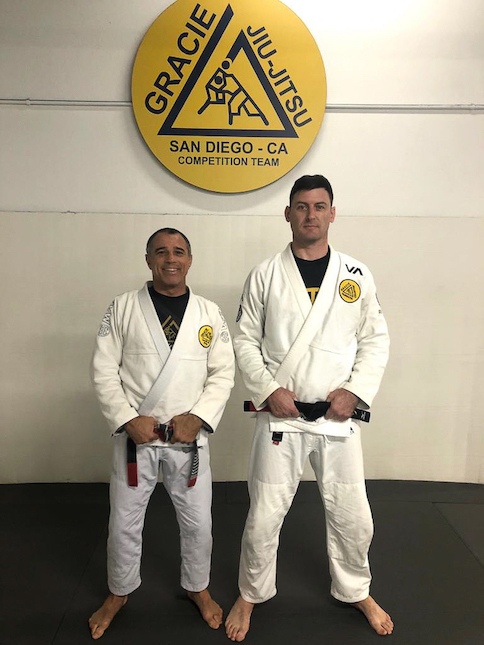 BJJASIA: What are your goals for the future?

MC: Goals for the future… I want to continue to grow my gym so that I can provide a great, positive place that the locals and US military can comfortably hangout, train, and interact with each other.

Being that my wife is Japanese and kids are both American and Japanese, we feel we are in a unique position to connect both cultures and communities together, Jiu-Jitsu is perfect for that, language and customs melt away after the slap and fist bump! 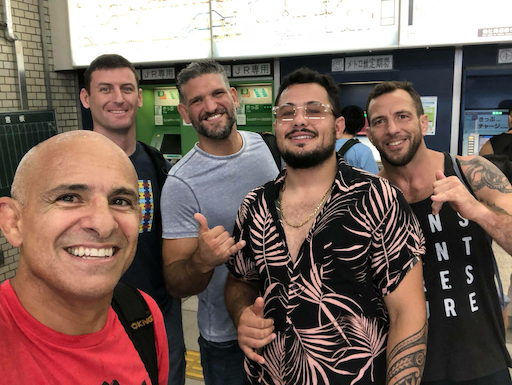 MC: Yeah, My wife, for having put up with my obsession with BJJ from day one and continuing to push me towards my goals! Prof. Ricardo for his friendship, mentorship and example from the very beginning! Last but not least all my students, there would be no gym without all of you! 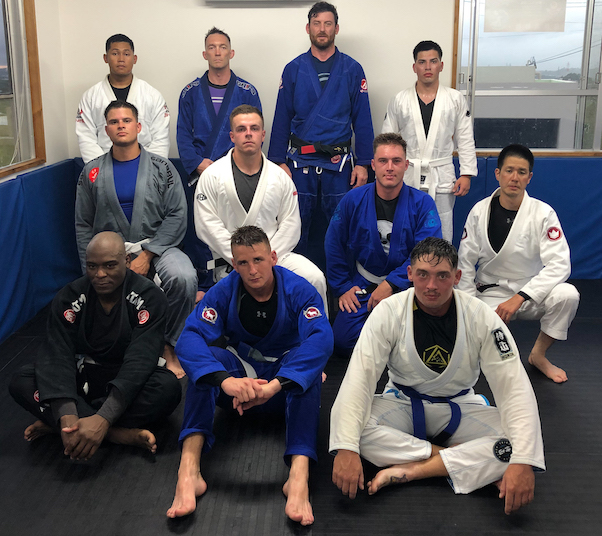 We are Kuro Hata BJJ Okinawa