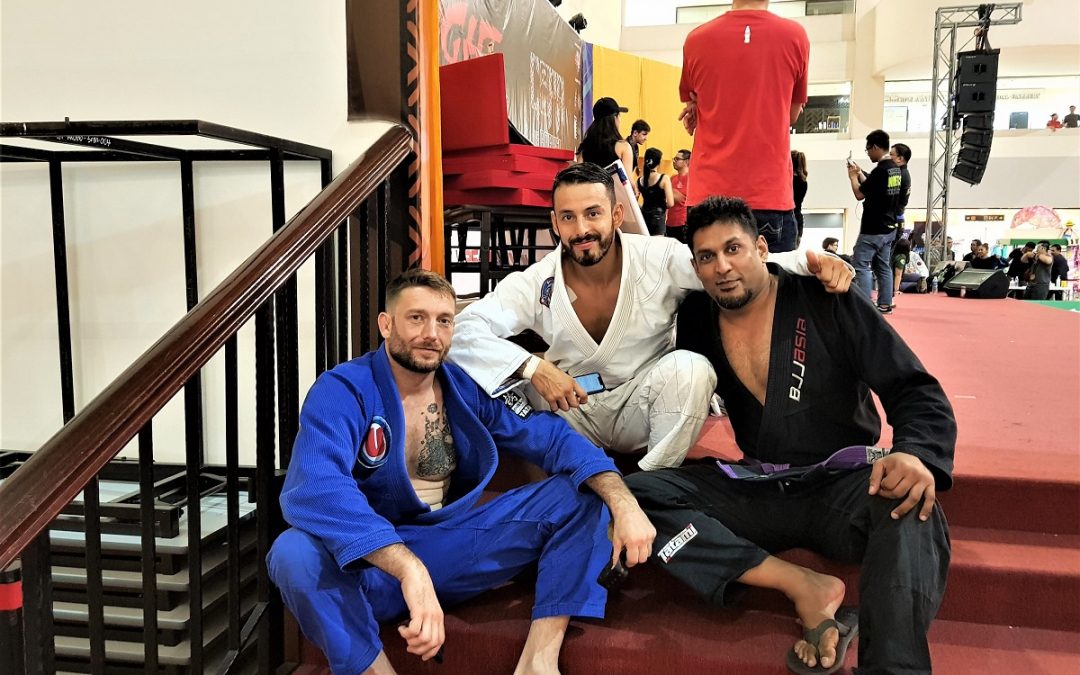 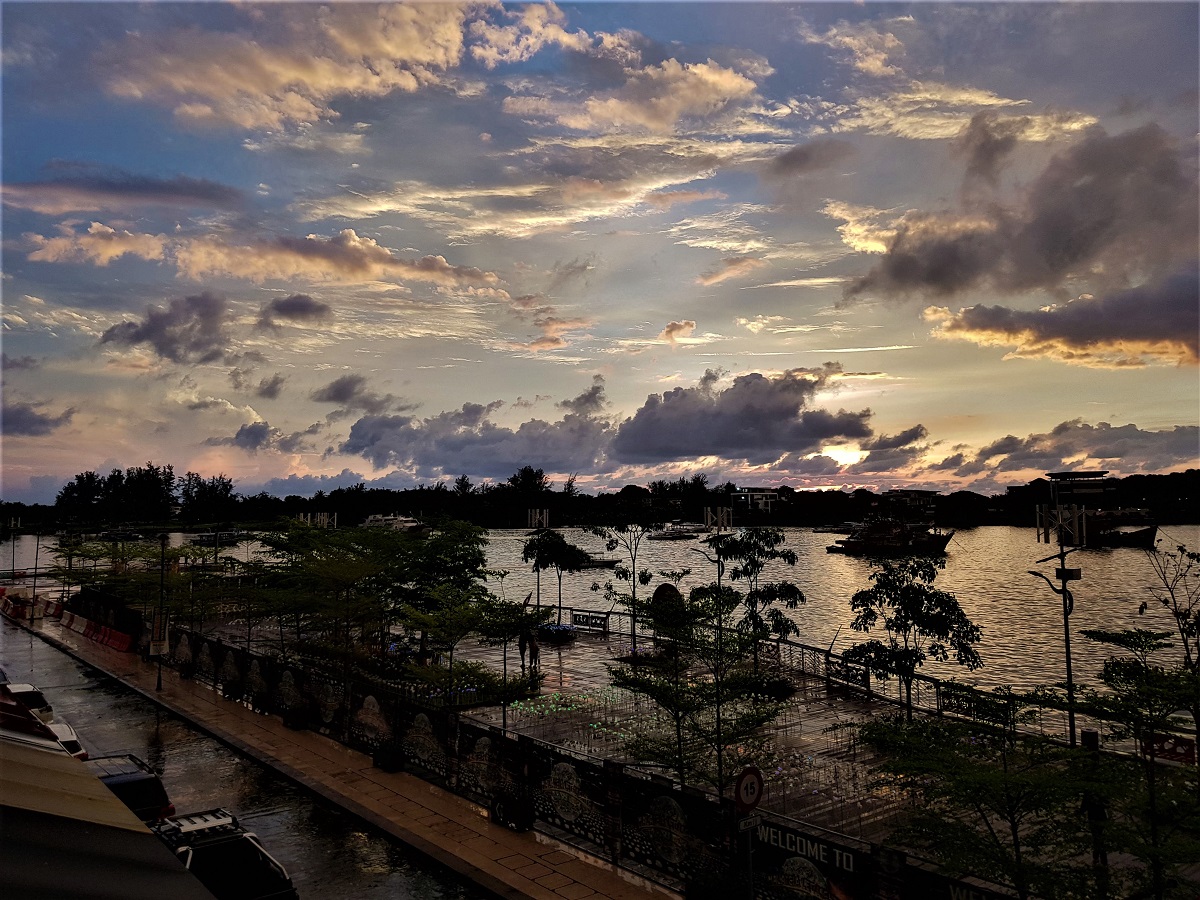 Sunset over the Sabah marina

It’s been a memorable few days in the island beneath the winds.
This was my first trip to Borneo and I was not disappointed.
Stunning coastline, majestic mountain range, lush green forest, exceptionally friendly locals and some delightful local entheogens.

I guess you realise you travel a lot when you land in a country and it’s not where you thought it was. I was under the impression that I was in the vicinity of Malaysia however Borneo is actually geographically closer to the Philippines. It’s directly under Palawan which coincidentally is where Alex Garland wrote The Beach.  A stunning part of the world.

The reason for my trip was to compete at the Copa de Borneo 2018.
A weekend of wrestling, binge eating and trying to make sense of the previous weeks data releases.  Yes I can fly off on a whim however maintaining a handle on what’s going on in the markets is essential. 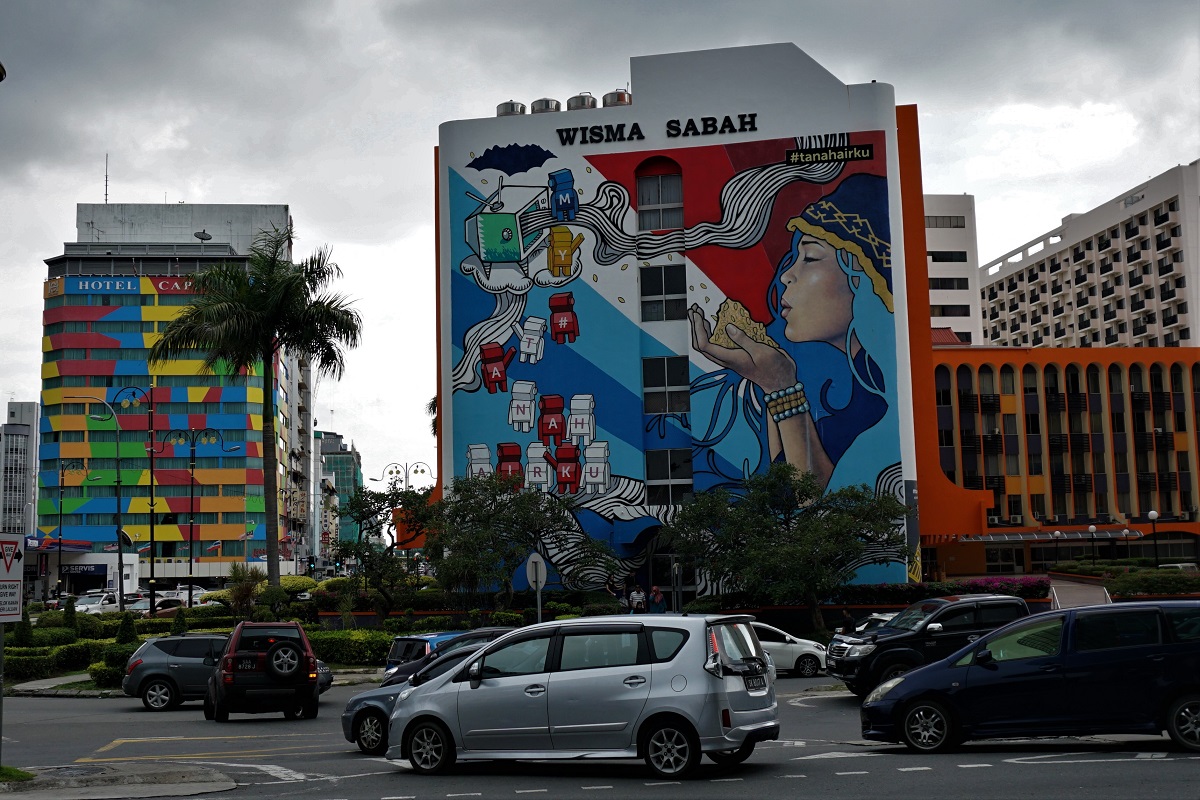 Downtown Sabah – always prepare for rain in the tropics

The competition was oversubscribed. This is fairly usual given the procrastinating nature of the jiu jitsu crowd. As such there were 2 mats where 3 would have been ideal.
This oversight caused the event to run later than expected. Then again we all know that jits competitions involve waiting and waiting and more waiting. The event was hosted in a mall so there was plenty to do and given the incestuous nature of BJJ in Asia, I got to catch up with loads of acquaintances I only see at such events.
Once the ball got rolling the action was evident. 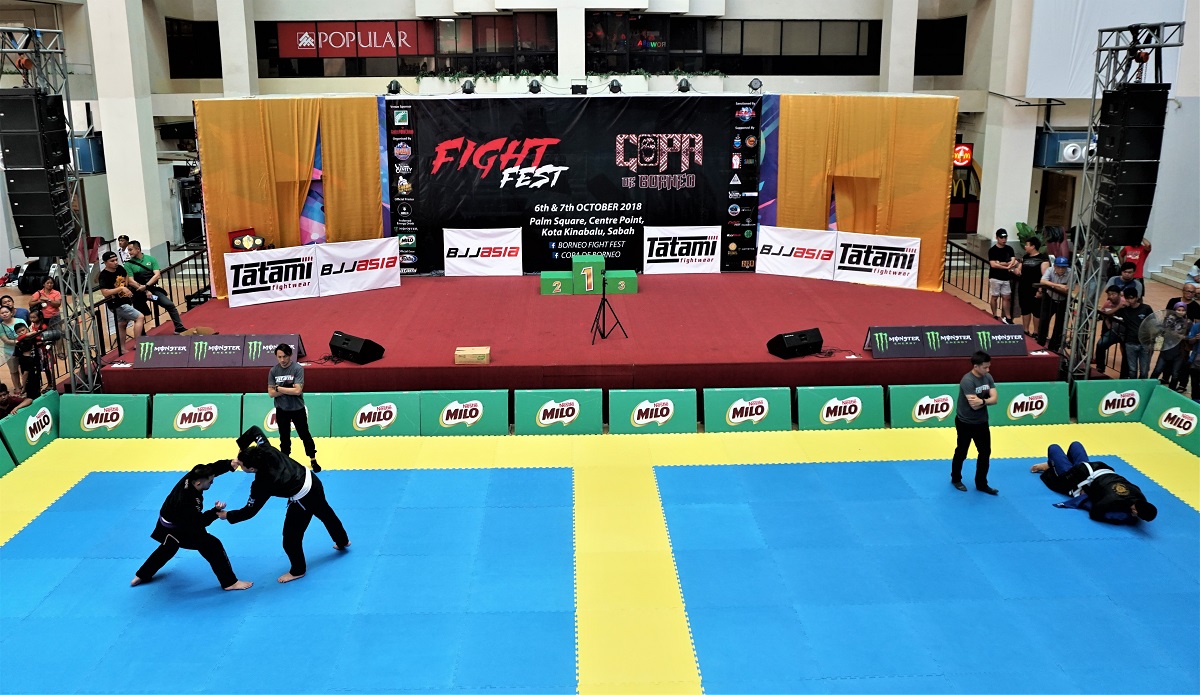 A small regional competition and everybody brought their A-games. The lower ranked matches tend to be the most entertaining as for the most part the participants don’t really know what they are doing which makes for greater spectator enjoyment.
There appeared to be no easy matches or rolls though. Everyone brought their A-game.
This reminded me of the culture at my home gym in Bangkok, Arete BJJ. 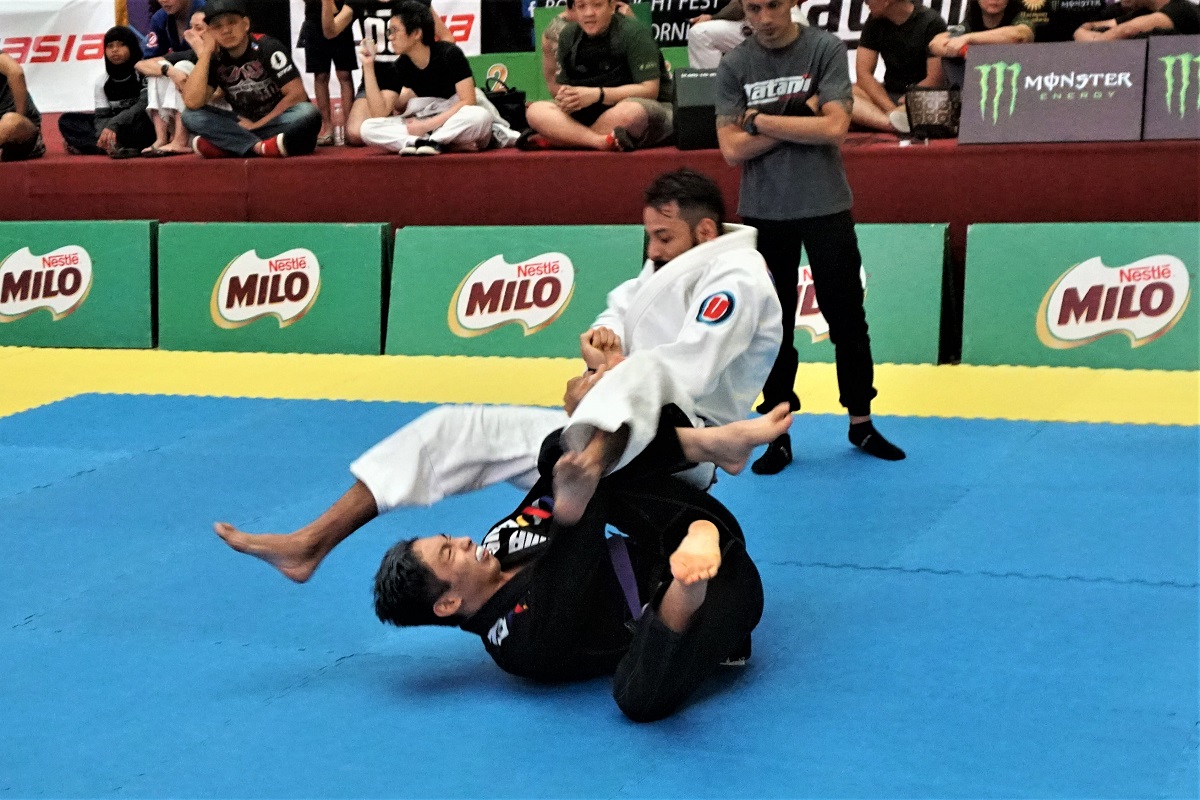 The lack of black belts on the island meant that individuals held their rank longer than if there was someone on hand to grade them.
As such, rolling with 10 year veteran purple belts was not unusual . Inevitably most of the senior competitors were running their own gyms or fitness instructors. I was getting nervous and the regret of spending the previous week on an acid induced island bender was becoming apparent.

Sebastian, my fellow team mate from Bangkok  was up first and put on a valiant performance taking the gold medal in his division in spite of a dislocated collar bone. That’s correct. He was scheduled in for surgery but opted to compete instead.  One can only admire his fortitude. 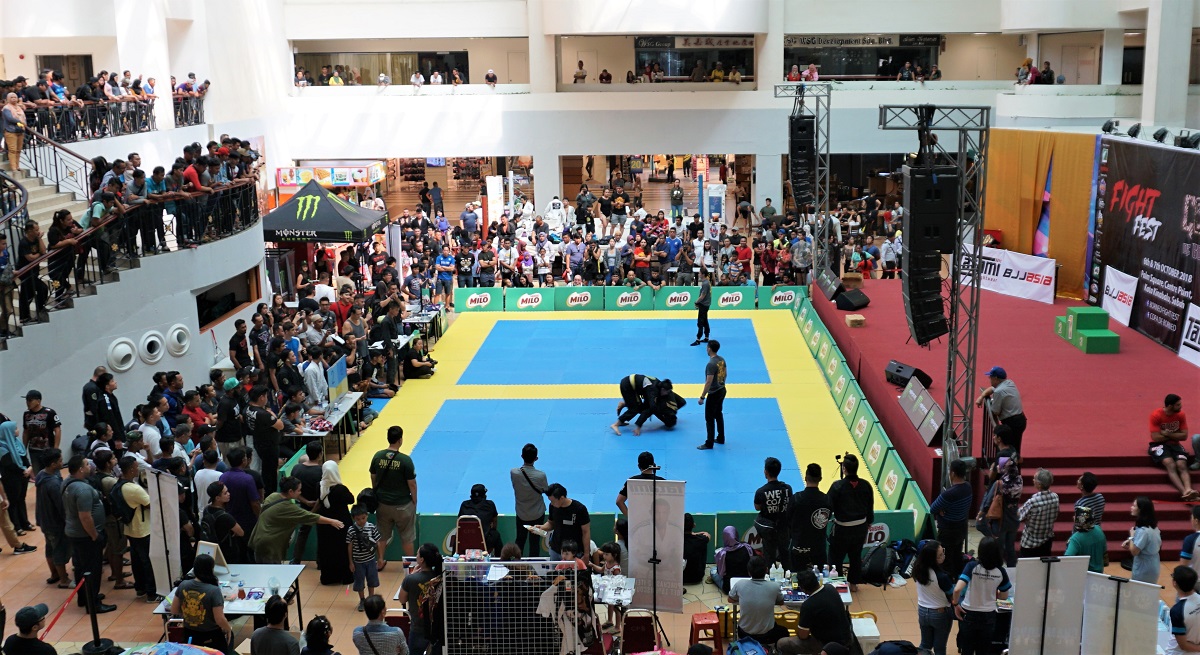 Judo, Sambo and MMA have a foothold at the various gyms on the island so the physicality of competitors was there.
These guys were no strangers to combat sports.
I had 5 matches, winning 4 and losing to a guy significantly smaller but equally far more skilled and technical than I am. Cardio has always been my nemesis and I fell victim to it once again. Or maybe it’s the combination of cardio and churro’s. Either way I have much to do to get back to fighting fit. 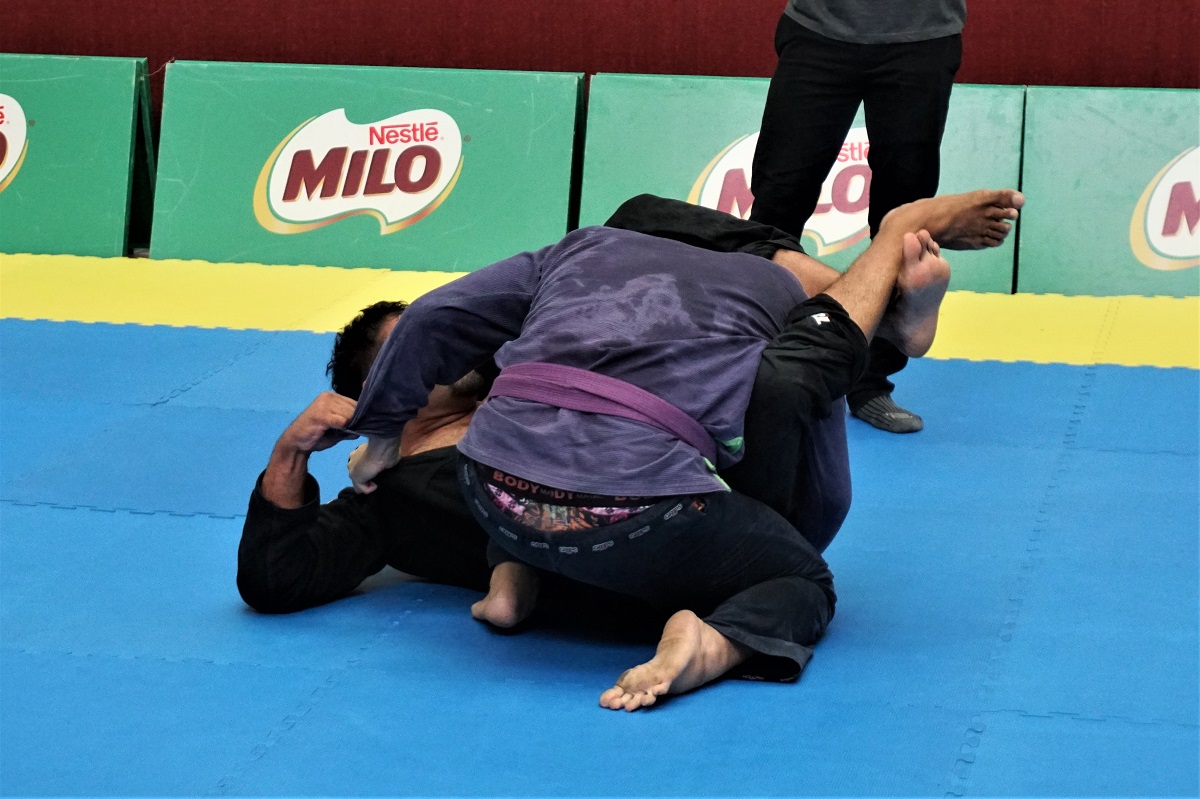 Almost getting that reverse triangle

The black belt super fights were certainly the highlight of the day. The bonus was that my coach from Bangkok was on the super fight card. Having your general go to battle with you always gives one an extra impetus to perform. Andrew put on a stellar performance but unluckily lost to Carlos Bakural who was last year’s Asian Open champion. Watching high level jits like this certainly gives one an insight into how much more training and time on the mats is required. Certainly an inspirational experience. 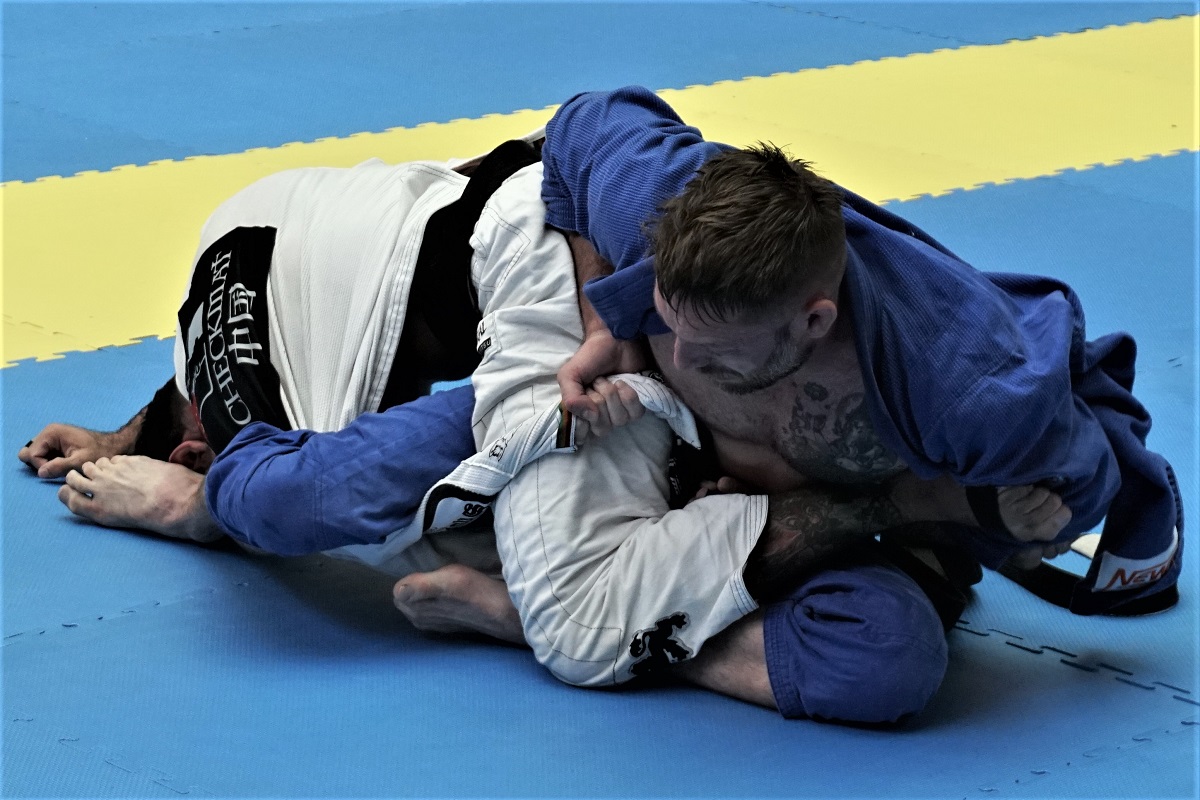 Ian Lee, Malaysia’s first black belt and an all round thoroughly cool individual was also on the black belt super fight card. I trained with Ian many years ago in KL and he certainly left an impression on my game. This time around we got to hang out and casually discuss techniques, life and lasses. Ian won his match and the crowd with an exhibition of world class jiu jitsu. 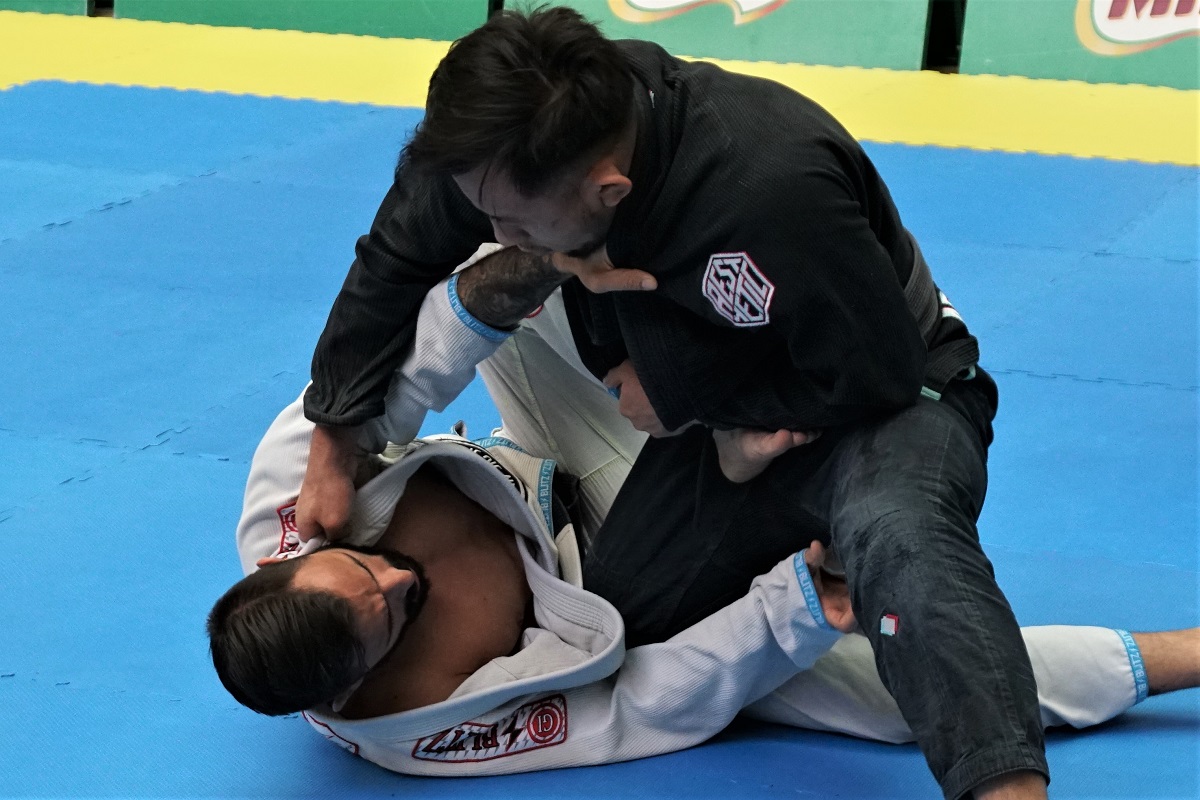 All in all the gi day was a blast however the post competition celebrations were lacking in the ‘exoticness’ that those of us from the kingdom of Siam are used to but fun nonetheless.
This was after all the first night.
The main event was the following day.
Sadly once the adrenaline and stimulants had worn off, I realised I had broken my middle finger.
Not the first time this happened but certainly the first time it took me a day to figure out.
Day 2 of the comp was over for me.
I was now relegated to a spectator. 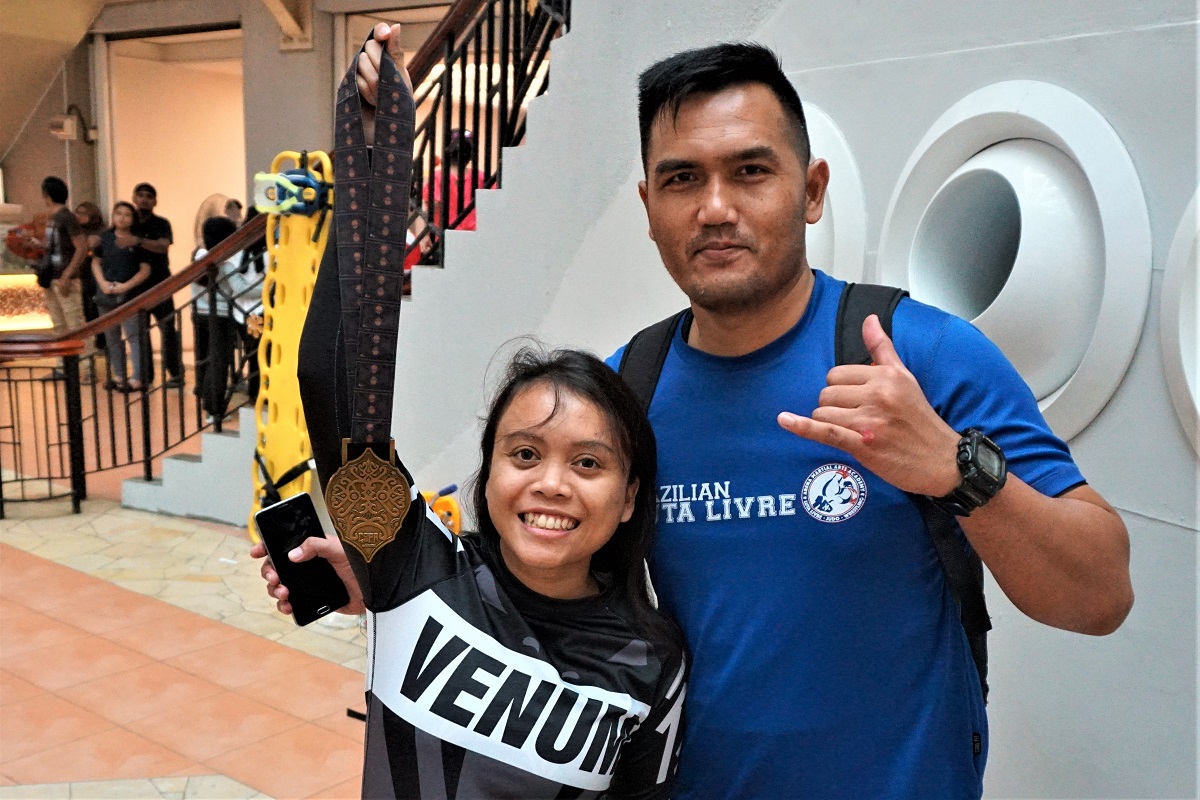 It was time to network, play BJJ journalist and enjoy a whole different class of medication.
Therapeutic CBD oil procured from an island witch doctor.
Day 2 was no-gi with a Luta Livre rule set.
Fun stuff.
Exciting to watch and definitely more spectator friendly than gi.
The event was over by 4pm.
Earlier than I expected and much needed as two long days had transpired. 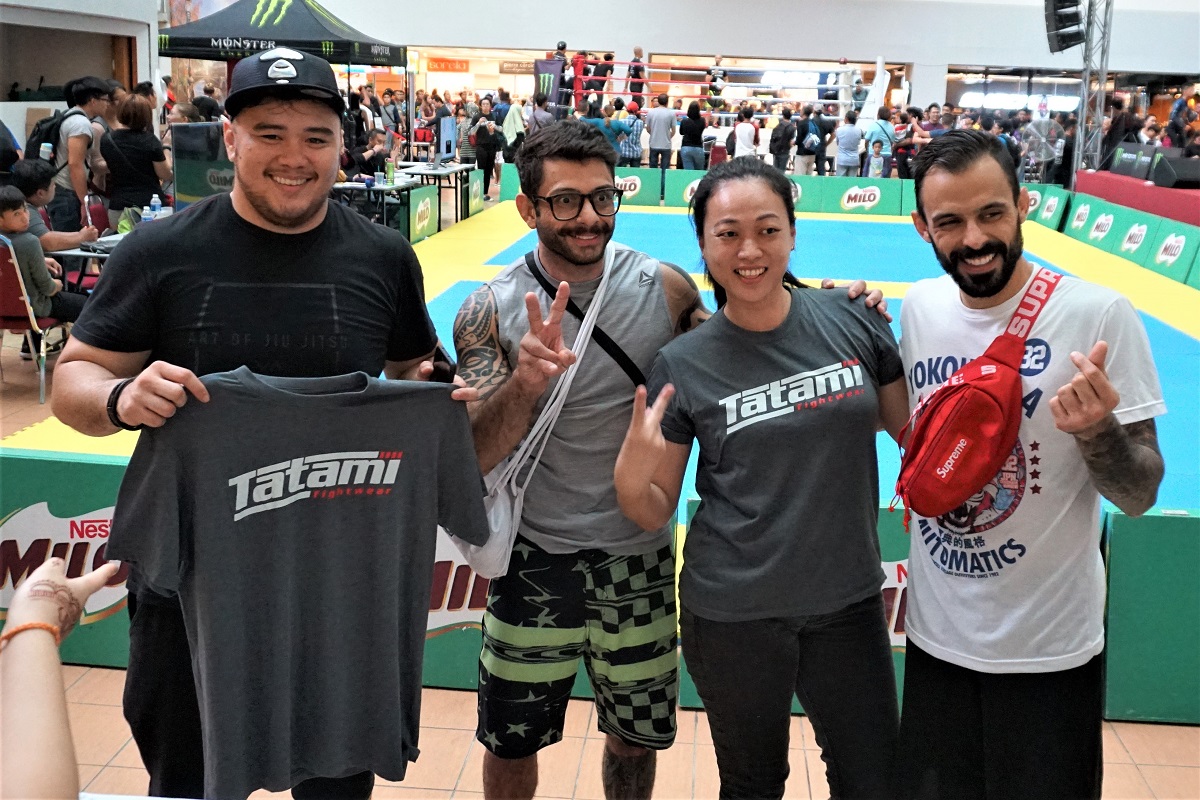 As is often the case in situations like this, following a tournament, the competitors descend upon the host city like a Mongol horde in search of the spoils of war.
This was not going to be any different.
Ian, Evan and I started the evening rather nobly with dinner at a highly rated local seafood restaurant.
I thought it was strange that the guys would take me to an aquarium. Turns out it was a seafood restaurant. Fresh has a different meaning in this part of the world. 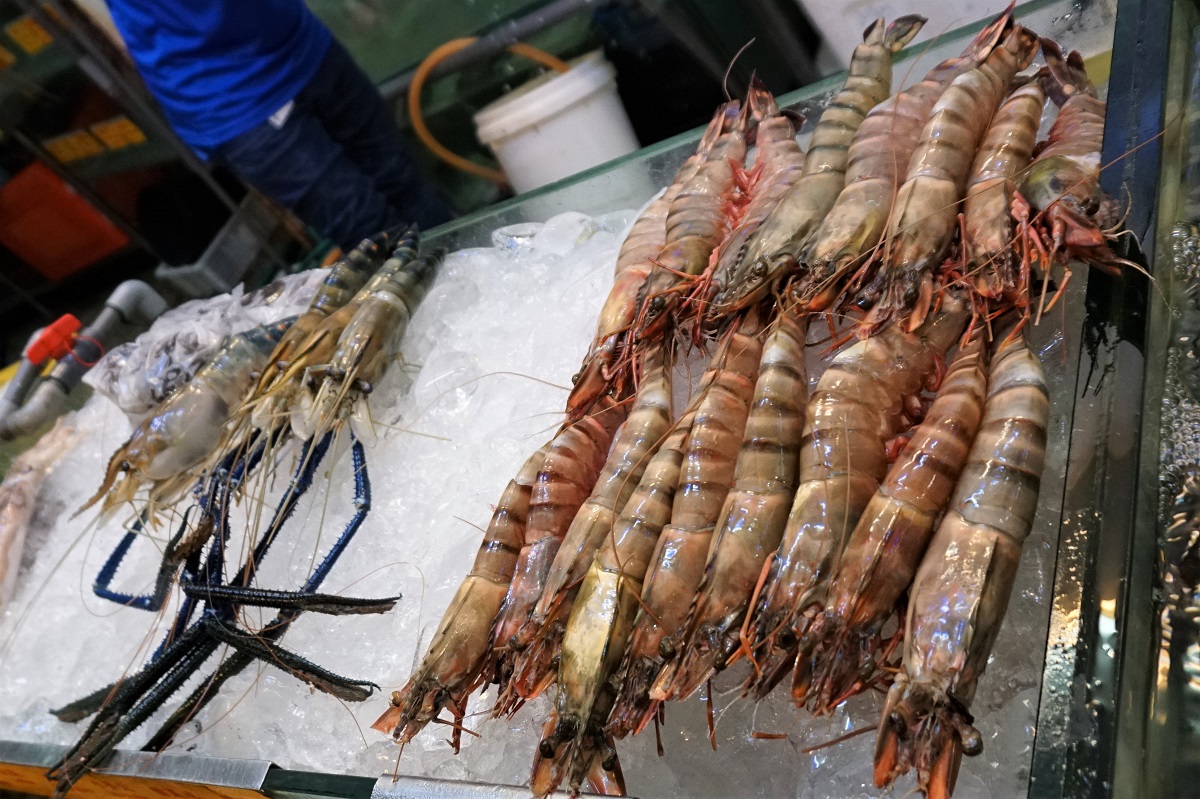 The main afterparty was set at a club on the Kota Kinabalu waterfront.
A spectacular viewing point for the sunset and somewhere I say should be put on your bucket list. People aside, the backdrop is stunning and unblemished by the masses of tourists we are accustomed to in Thailand and other island holiday destinations.
Slowly but surely the participants, worn out from 2 days of wrestling and grappling, trickled in.
Soon the place was packed and our ever generous and hospitable host ensured the rare and smooth whiskey flowed with ease. 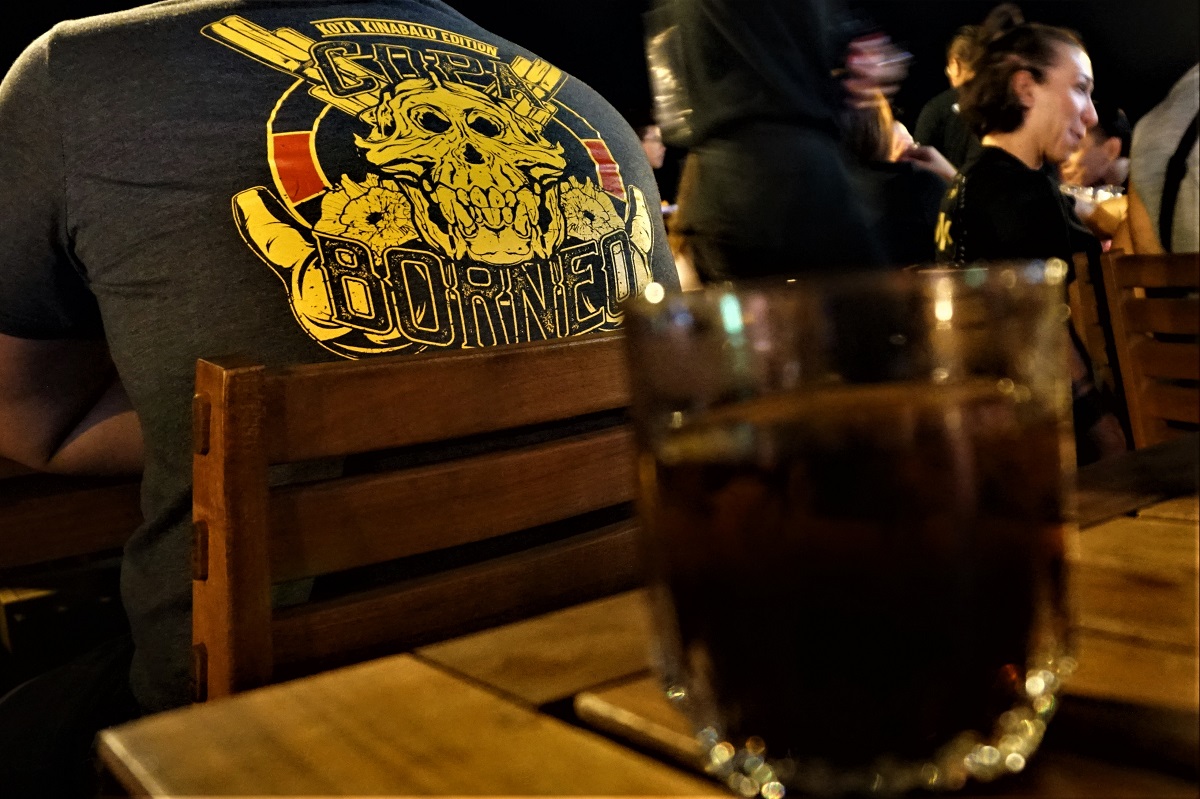 This I find to be one of the most enjoyable aspects of jiu jitsu. The culture and camaraderie behind the sport. Meeting fellow enthusiasts of the sport, realising you are not the only deviant in the village and then proceeding to get fucked up with them.

Kota did not disappoint in this respect. Most of the regional teams were well represented and there was certainly a festive and playful spirit with the crowd. Island life tends to bring that out in people. 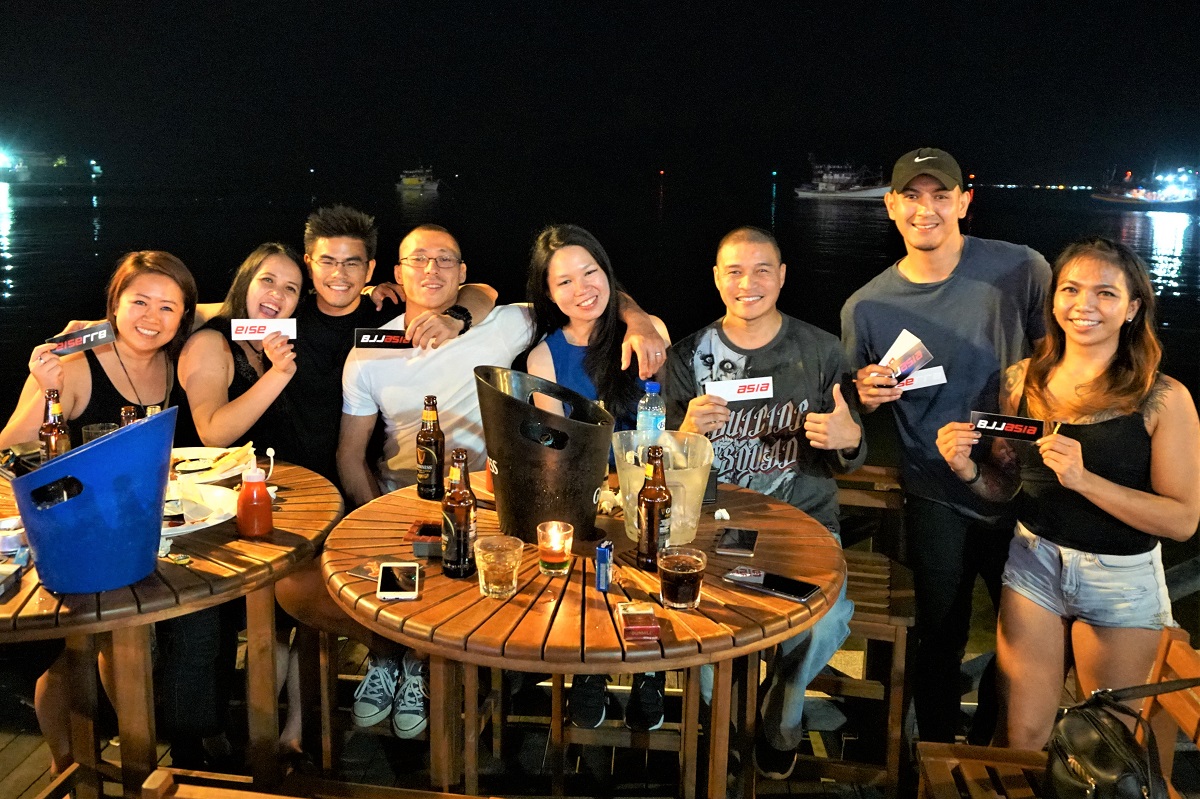 Jits people aside, the locals were friendly, engaging and genuinely interested in the foreigners to their city.
Even though on Air Asia’s budget airline route, this locale hasn’t been polluted or tainted by tourism.
Sure I saw a couple of bogans but not enough to sour the atmosphere.
Finding a party prescription may not be as easy as other Southeast Asian countries, but then again I’ve always found it difficult to find a buzz in a Muslim country.
But don’t let that put you off.
What was lacking in entheogens was definitely compensated for by the local talent of this luscious island.
Luscious is also the adjective I would use to describe the locals.
Say what you will about British colonial history, I’m grateful for that islands imperial ambitions.
After all they did bring all these races together, enslave them for agricultural and mining work and generations later we have this amalgamation of ethnicities.
Tall Chinese looking girls with Indian features, European figures and tropical complexions.
My kind of place. 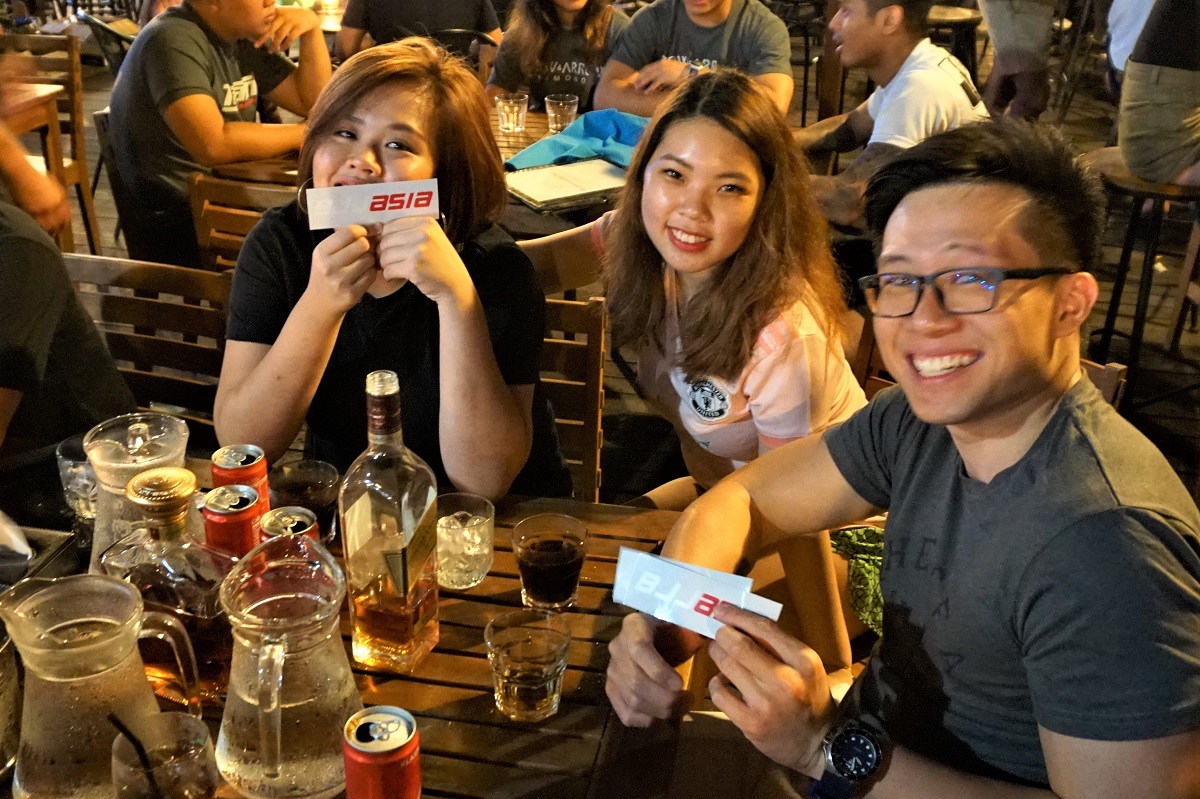 So my better half is probably reading this section now so I will end my account of the events and proceed to describe what I heard from some of the other guys that ended up on all night bender. Or maybe I will save that bit for when we meet in person. Needless to say it was a memorable time and the most fun I’ve had without lube.

I would like to personally thank Syaiful for organising and hosting this event. Clearly a lot of time and effort goes into such an endeavor and it was appreciated by all of those that participated.

Stick this event on your calendar. It’s the best small, regional competition in Asia!

I will definitely be back next year. 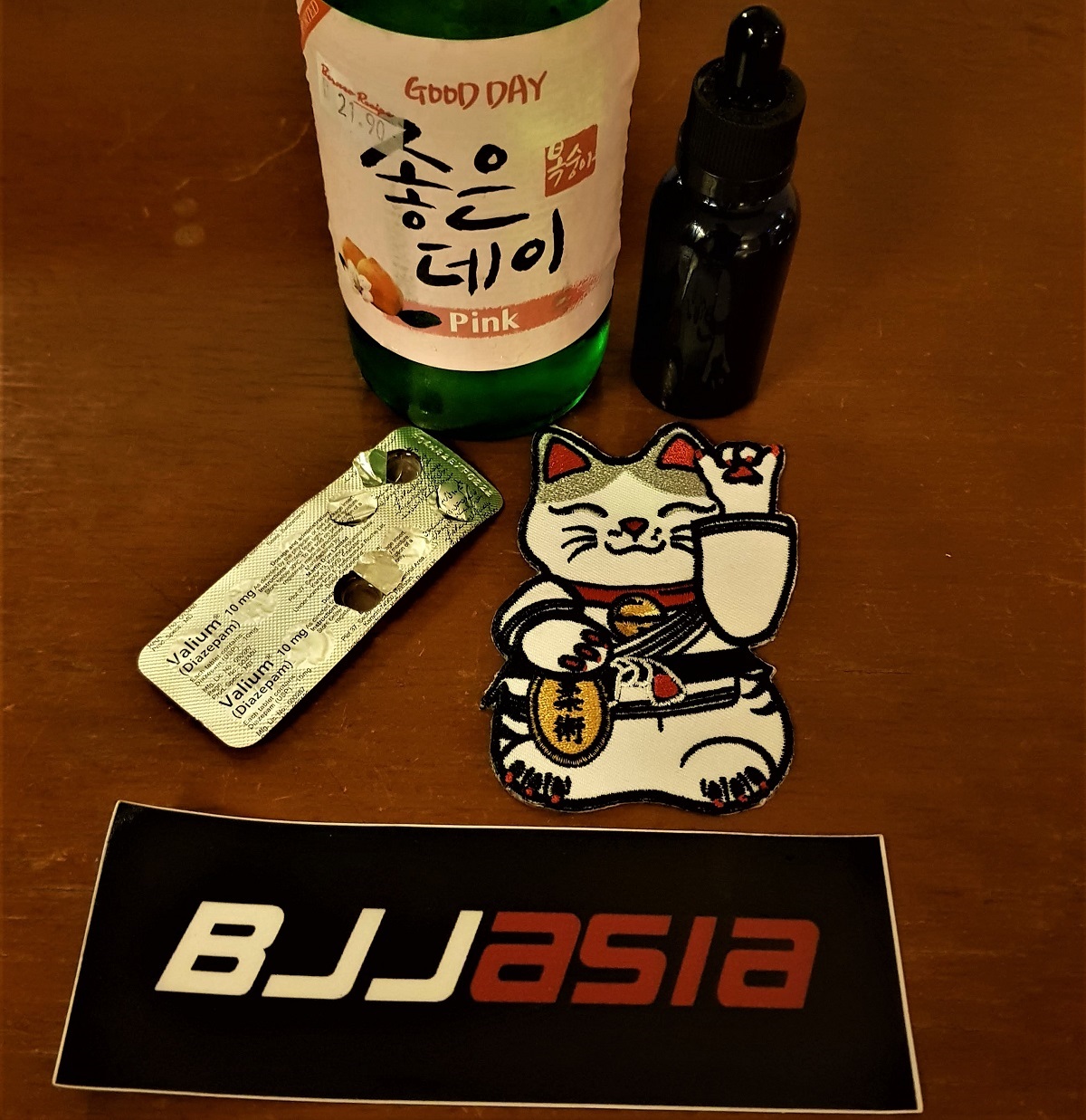 Signing out for BJJASIA and remember our motto guys:
“Amoxycillin and Okamoto 0.1 – Live to fight another day!”