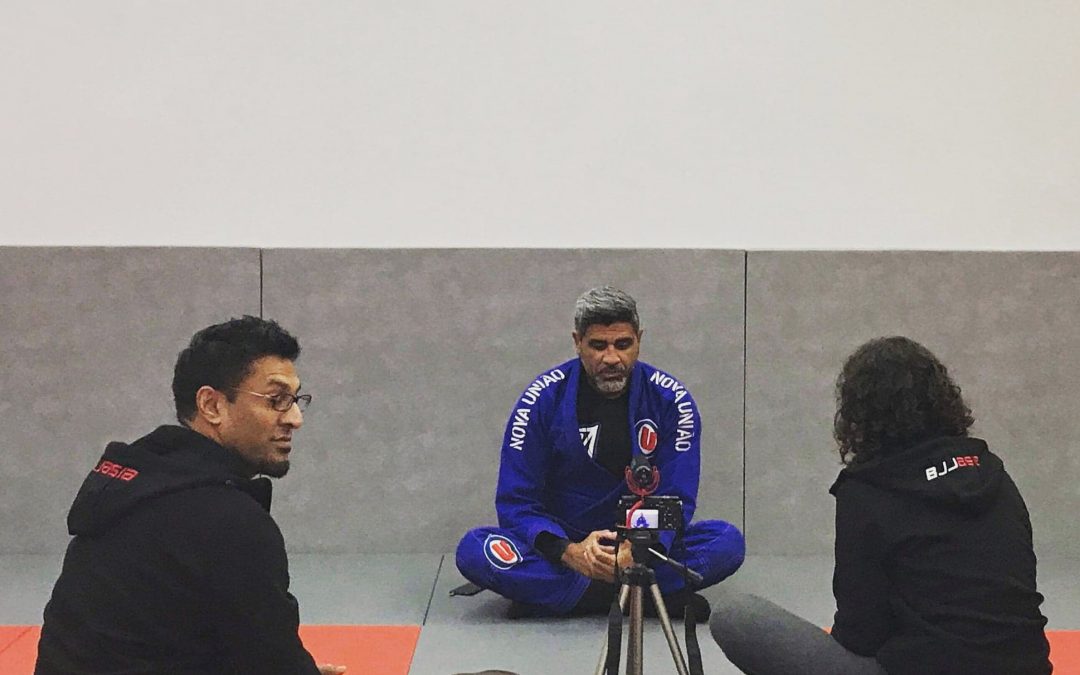 Wendell Alexander received his black belt in 1986 at the age of 20. Coming from the Oswaldo Fadda lineage he co-founded Nova Uniao and has over the years established a stable of world renowned competitors and fighters. Earlier this year I had the privilege to sit down and discuss an array of subjects with warrior and gentleman.

Tell us a bit of how your story in Brazilian Jiu Jitsu started, who were your role models in the sport?

I was 5 years old when my aunt put me in jiu jitsu so I would behave better, because I was very rowdy. From there, I never stopped.

Back then there were not any. You had to survive in the lions’ den. BJJ was not as famous. Only the Gracie’s were known. Only the Gracie’s had the fame, the power of knowing about martial arts. Because I came from Oswaldo Fadda ‘s side, the process was very slower. So we had to find our way in the lions’ den. Then it started my passion for jiu jitsu.

How do you feel about being a role model for so many people?

I took a lot of inspiration from my teachers – Geraldo Flores , Sebastião Ricardo -, and I never had this one to say ‘I’ll follow this person’. I wanted to give the example to my students as myself, I mean, I was not a champion myself but I needed to build champions.

I tried to show my students, without holding off any technique, that they had what it took to become the best. I put a lot of emphasis on that. I put myself on the side a bit, as a fighter and an athlete, to focus on my students. I believed in this, and we were able to establish New Union and be recognized worldwide.

How important do you think competing is to get better at jiu jitsu?

I think that in the old times, competition in jiu jitsu had a lot of influence for the athlete to gain exposure, money… Nowadays, I think it doesn’t have as much influence. It’s more for one’s ego. Because no one can maintain a gym and be a champion.

A gym is maintained with other dynamics, other ideals, and other obstacles. But building a champion is something truly wonderful. You feel proud of your work.

For you, how has it been this process of building champions? And what’s the key/what
makes the difference?

Nowadays, when you build a champion, you lose him very fast. When the athlete becomes a multiple times champion, he thinks he doesn’t need his teacher anymore. He can fly by himself.

So nowadays forming a champion is dangerous. When you train an athlete, and he starts winning, you have a very strong affection and passion. He becomes like a son. And during that period, that son will fly/spread his wings. He goes away/leaves. And your heart gets a bit hurt. Very proud, but a bit hurt.

So forming a champion is very nice, it’s extraordinary, and at the same time a bit dangerous. You ‘lose’ someone important in your life.

Do you expect your students to compete or push them to do it?

I think life is all about that: life, not only in jiu jitsu, but in all other aspects, is a competition. You wake up competing. In anything you do. I motivate my students to compete for the origin of the sport, for the adrenaline of the competition. I encourage but nowadays to fight in a competition is very expensive, it bears a lot of costs, from the certification/federation membership to the sponsors, travels, accommodation, food, registration fees… So the cost of fighting and of you preparing an  athlete to do it, is very high.

Sometimes it doesn’t depend only on the athlete; as a teacher you have to take from your own pocket to help that athlete. When neither you nor the athlete are able to, you lose the chance of making that champion, cause you know that he has what it takes to become one but lacks the financial means to reach it. So you have to risk it/take a shot. That’s why I think competition, regardless of how much fun it might be, it’s not for everyone.

Not everyone has the means, not in terms of technique, but rather financially, of competing in such a big event like the Europeans. I have several athletes, not only from my gym, that have a lot of well prepared athletes but just don’t have the means to come and fight a wonderful championship like this. Everyone has a dream.

When did you start competing? How was it?

I was 5 years old and had no motivation to compete; it was just playful. When I was 10 I competed in a championship that had ‘expressão nenhuma’ but I didn’t win because I didn’t take it seriously And in jiu jitsu you have to be very dedicated, you have to train, your body needs to be prepared to fight. When I started winning championships I was already Master. I fought Adult very well but didn’t have the physical part or eating habits. …………

Is there a moment that have marked you, that have been very gratifying?

Several, several… Jiu Jitsu, at the same time that makes you cry, it makes you happy. Simultaneously gives you disappointments, and lots of joy. So we stay in that uncertainty: wondering if it’s going to work out or not. And the competitions give you a lot of joy. They can make you feel very angry, very happy, or very sad, because the athlete was very well trained but lost the match. …But I had a lot of joys. I think I’ve had more joy than sadness in this sport.

In life, I feel fulfilled. I’ve built a very big team, I have three beautiful children, and a beautiful granddaughter. I have very good athletes, very educated, I have black belt athletes who don’t compete and are very well accomplished in life (they’re doctors, teachers, instructors, soldiers) but lead a very dignified life, and for me that’s gratifying. Jiu jitsu is not only about fighting. Jiu jitsu is a sport that takes people a bad path, gives a lot of models…. and that’s what I’ve looked for my students. It wasn’t just about fighting.

How have you managed to balance jiu jitsu and personal life all these years?

In one word: Passion. You have to love what you do. I’ve dedicated my whole life to jiu jitsu. Whether it was my marriage, my family, my children, my daily life… we’re given a choice, and mine was always jiu jitsu. It was training, it was having a healthy body. Today I’m almost 51 (next month), my body is healthy, I don’t drink, don’t smoke, never used drugs, and have always tried to keep all of it within jiu jitsu so I’d be a person, a mirror to my students. And thankfully I’ve managed that naturally, without lies, without stepping over anyone. That’s what jiu jitsu does. When you fall in love with what you do, down the road you can only be happy.

In relation to injuries, have you ever had a serious injury or what’s the advice you give to
athletes?

About injuries..what I can tell you… The athlete who says he hasn’t had an injury, is a liar. Especially when you get to a certain age, you get hurt a lot. I tell my students that I not only have injuries in my body, but also in my head. Due to jiu jitsu’s disappointments. So I have injuries in my knees, both are doomed to go under surgery which I haven’t done yet, my shoulder is bad, elbows are bad, fingers are crooked. Life has these things that you see yourself nurturing and carrying it throughout your life.

In the end, you need to know how to deal with it, and I’m sure many people who practices sports or does jiu jitsu, has it’s injuries, even a bit hidden. There are those who don’t speak about their injuries, and those who share them with their friends so they get a good support. In any case, I believe jiu jitsu brings you that peace of you being able to have that good recovery and for your students to get a good training even injured.

I want to thank you, BJJASIA, for the opportunity, and congratulate you for this achievement, cause it’s not easy to put together such a venture, quite natural so we can be in contact, and say jiu jitsu is not only about competition. Jiu jitsu is for life. If one loves jiu jitsu and wants to live jiu jitsu, then needs to love it. It’s just like a relationship, you must love. You have to be in it. 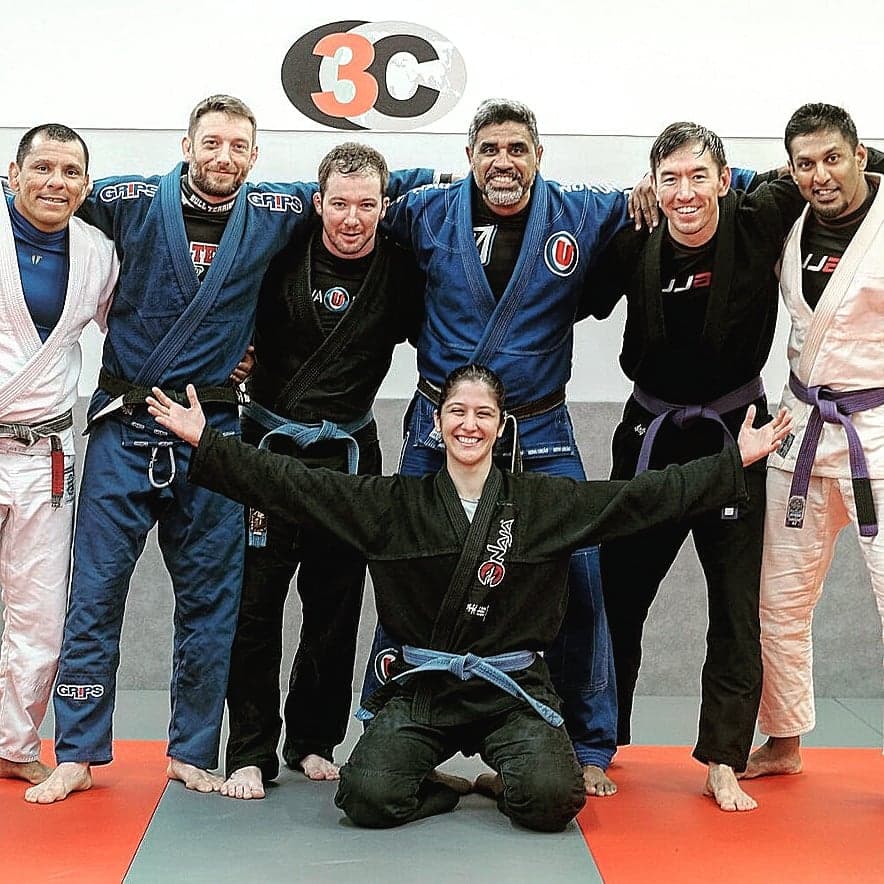