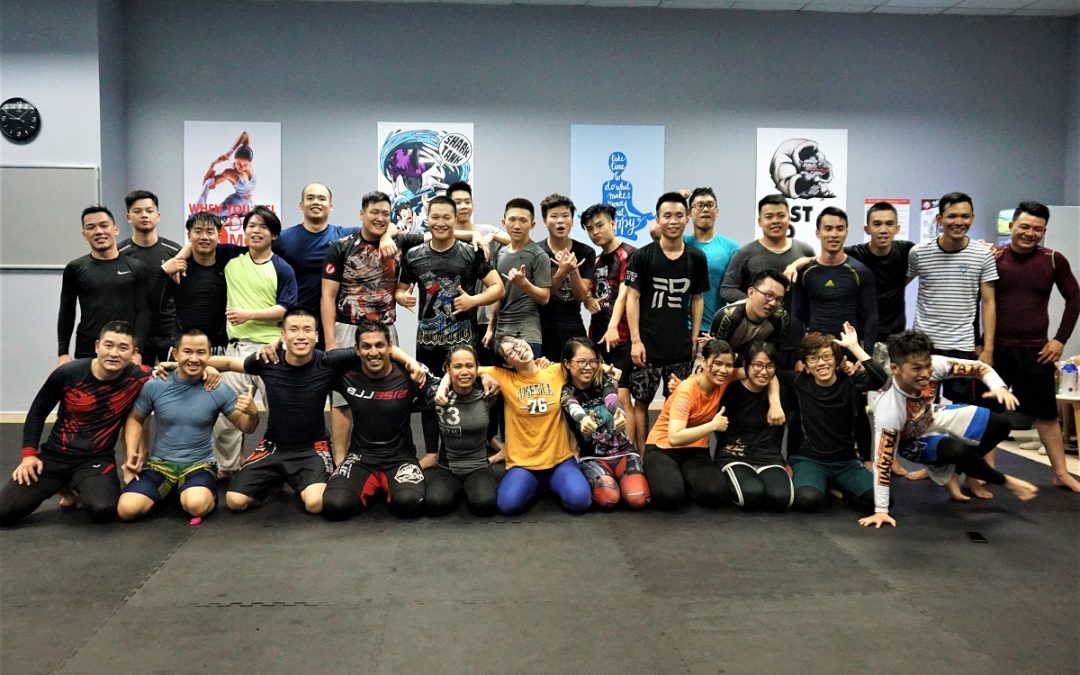 This is my third visit to Hanoi over the last 7 years and it’s barely recognisable. To put things into perspective, 7 years ago the road from the airport to city was effectively a two lane dirt road. This has been replaced by a 6 lane mega way that one is familiar with in the West.
The stark contrast between old and new is ever apparent. 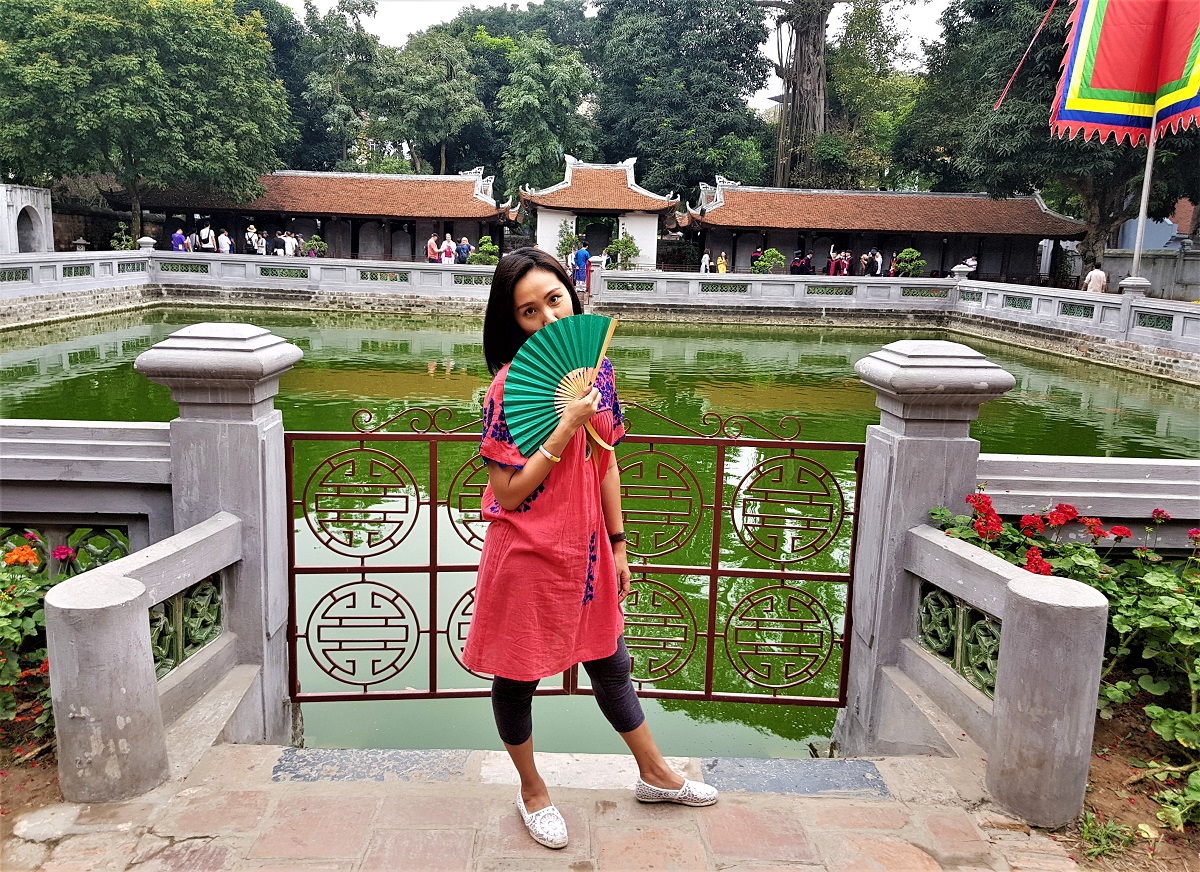 Also noticeable was the change of attire, the majority of girls used to wear Áo dài or the traditional Vietnamese dresses. No longer the case. There’s an unspoken beauty and allure in that look.
The local talent have paler complexions and look slightly more Chinese than the other races in Indo-China. I certainly find them more attractive than other South East Asians though Vietnamese girls have a sense of aloofness about them.
Clearly indifferent to foreigners as mating partners and they particularly don’t like Americans, as for all intensive purposes, you killed grandma. 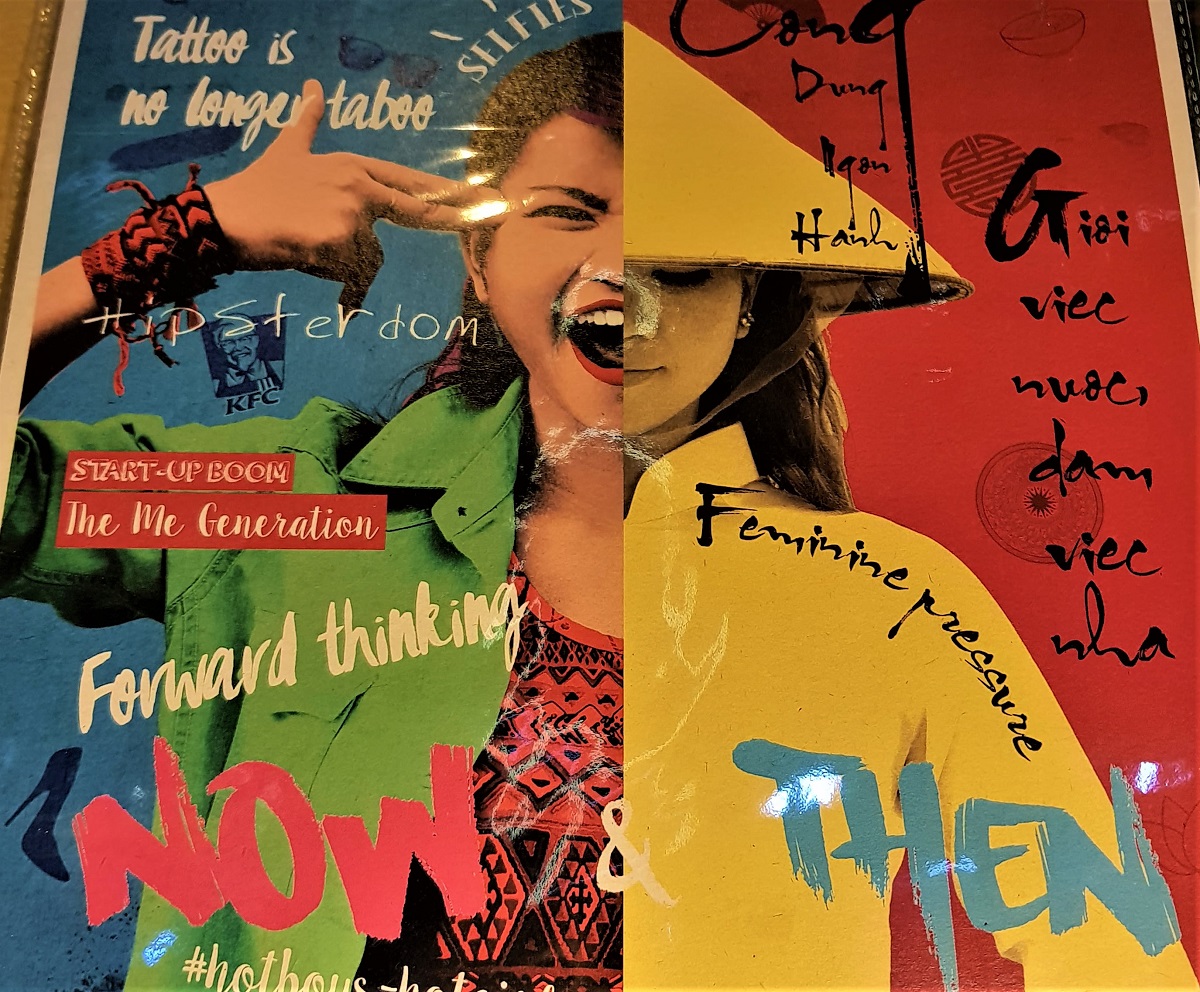 My previous experience here involved attempted murder on one evening and being robbed on another. But that was a previous BJJASISA trip report, one that has been archived in the X files.

Hanoi still emanates with remnants of its French colonial rule. The city itself is a melting pot of Asian and Western, old and new, water puppet shows and progressive house, Popeyes and pho, opium and speed.
This unique charm makes it my favourite destination in Asia. I’m still not sure why I don’t live there. Oh yes, there weren’t any Jiu Jitsu academies here back then. That has since changed. Jiu Jitsu has just started to penetrate this remote enclave of northern Vietnam. 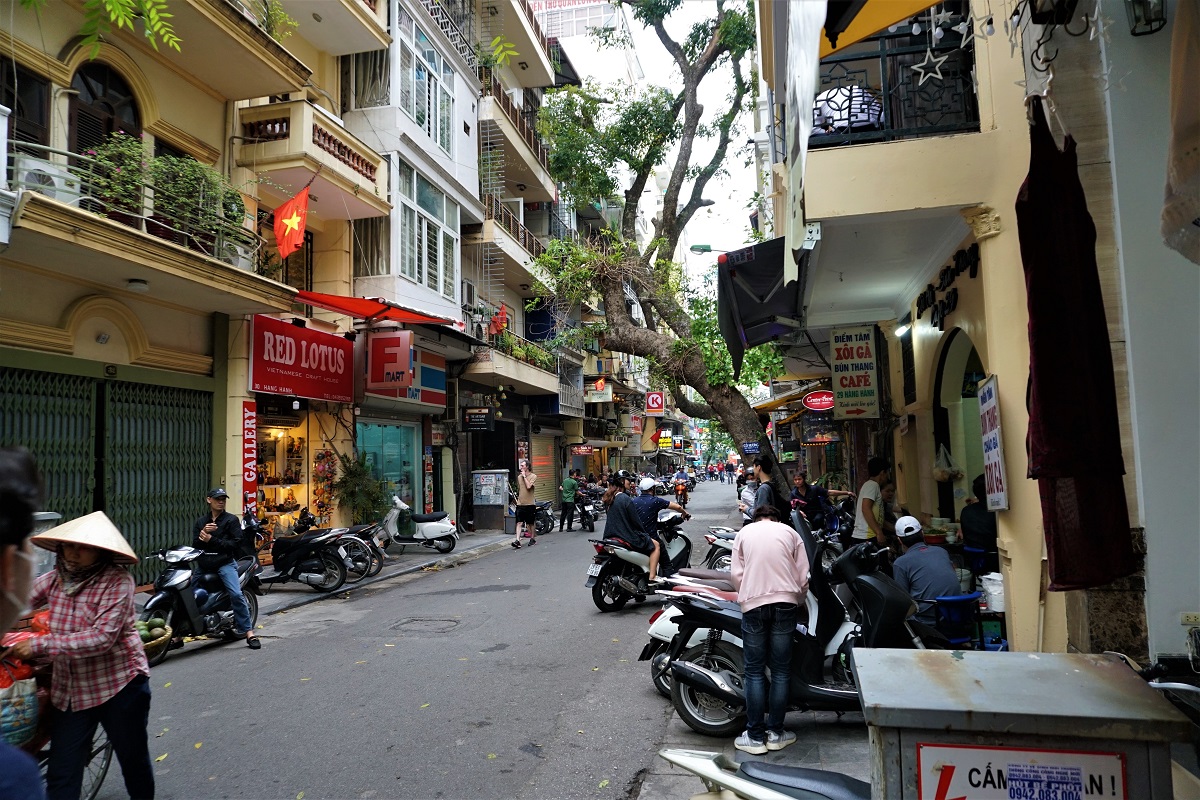 This was however my first trip here with my better half. Arriving in the old quarter we rented an old colonial airbnb apartment overlooking the bustling streets below. It could have been an apartment in Saint Germain with high ceilings, Venetian blinds, parquet flooring, exposed wooden rafters and an eclectic assortment of art adorned the walls. 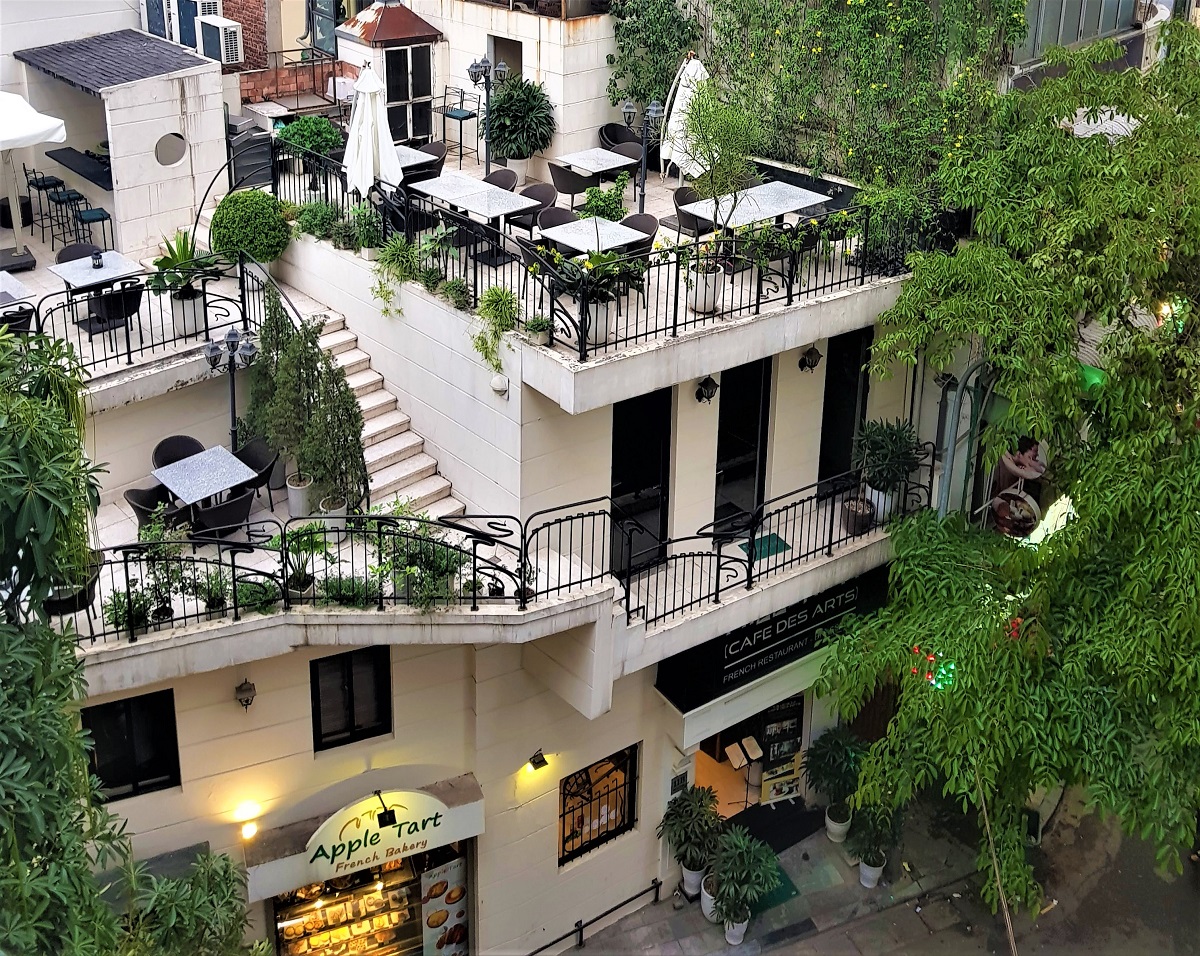 View from the apartment

Due to a tight itinerary the only class I could make was the Friday evening nogi session at Ronin BJJ. I dropped the guys an email before arriving to clarify and confirm the times and location.

The gym is set away from the old city where I was based, in a modern building which is a product of the exponential levels of growth and development Vietnam is currently experiencing. Reminded me of Bonifacio Global City in Manila. 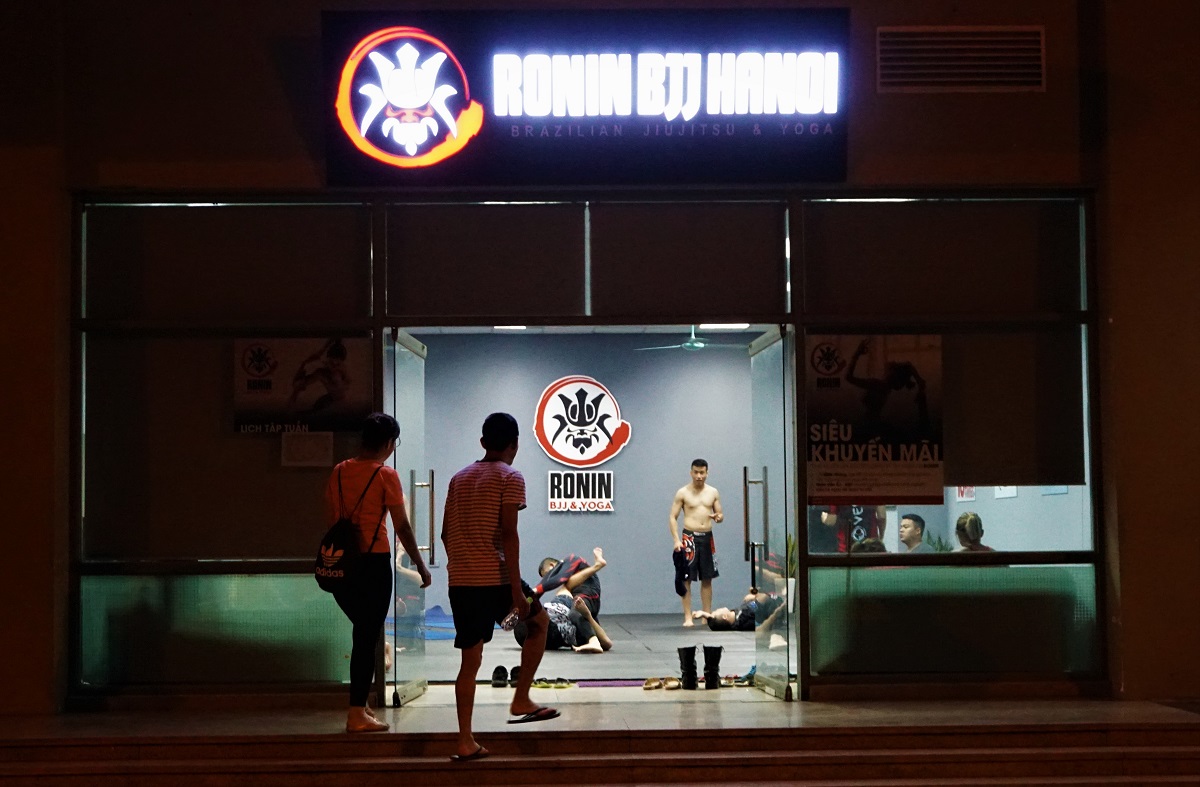 I arrived early to training, Grab is an essential app in this part of the world. They recently acquired Uber so it’s necessary for getting anywhere outside heavily tourist zones. The drivers have a basic English competence and the app itself removes any ambiguity about destination or cost. In spite of this, fuck ups are still to be expected. 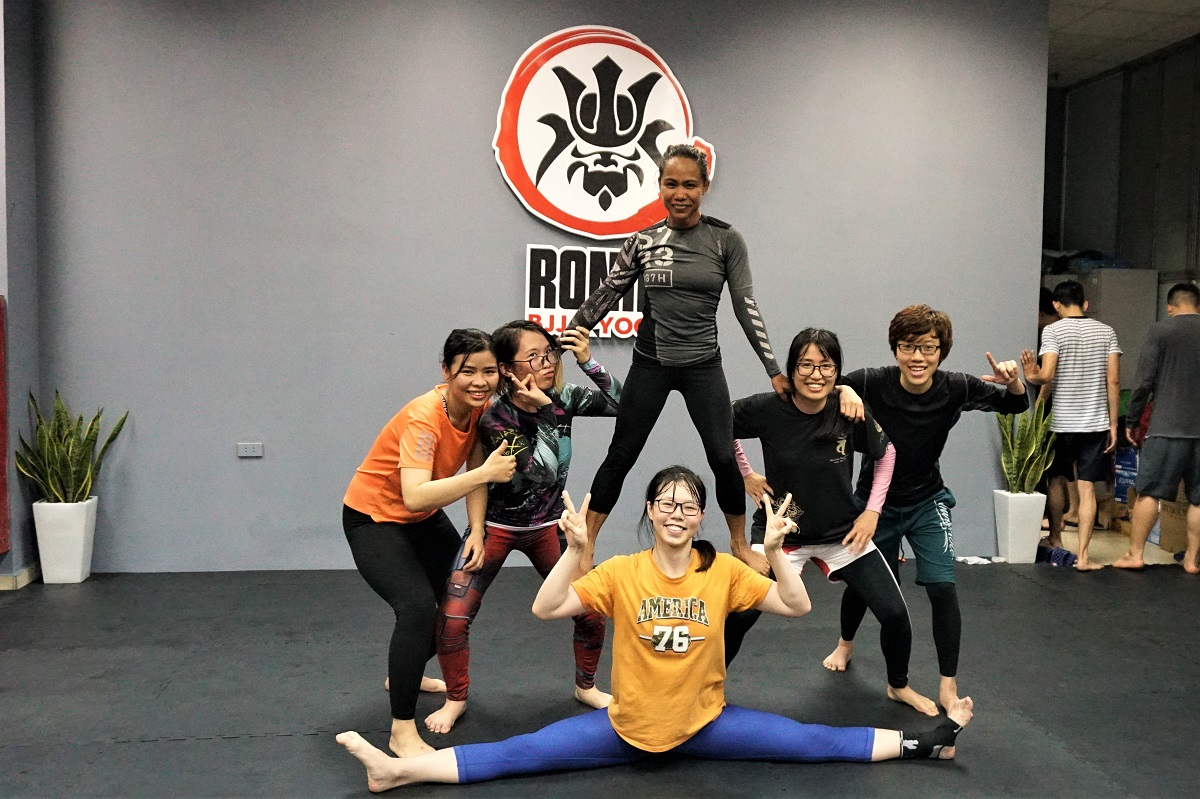 The hand maidens of Ronin BJJ

Ronin BJJ is set in a small venue which doubled as yoga studio .
Headed by two local purple belts who really embody the martial spirit, the ethos of jiu jitsu.
Just a couple of mates who want to improve the bodies , minds and jits. I was surprised as to the size of the class, of the number of students. It shows that you don’t need black belts, affiliations or brand names to do what you love.
Just enthusiasm, dedication and perseverance. 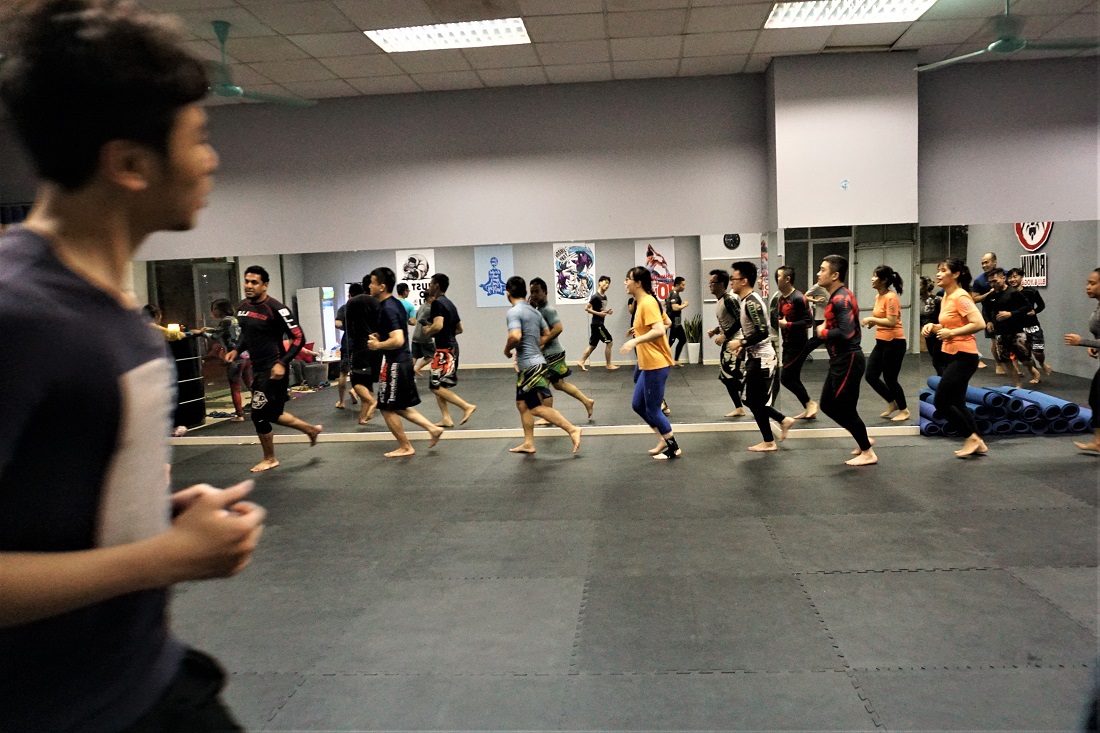 As the ranking belt I was asked to lead the class. Much to my surprise and dismay. Chemical half life’s can be wonderful or disastrous. Given the situation of course. I was still coming down off the days travel prescription.
I had after all just arrived, checked into the airbnb and went straight to the gym. Dragging my better half along as well.
No problem though.
Just repeat what I usually do at my home gym. If only I could remember what the warm ups at my home gym entailed. Oh that’s right, I strategically arrive after warm ups in time for technique or preferably sparring. So let’s wing it. 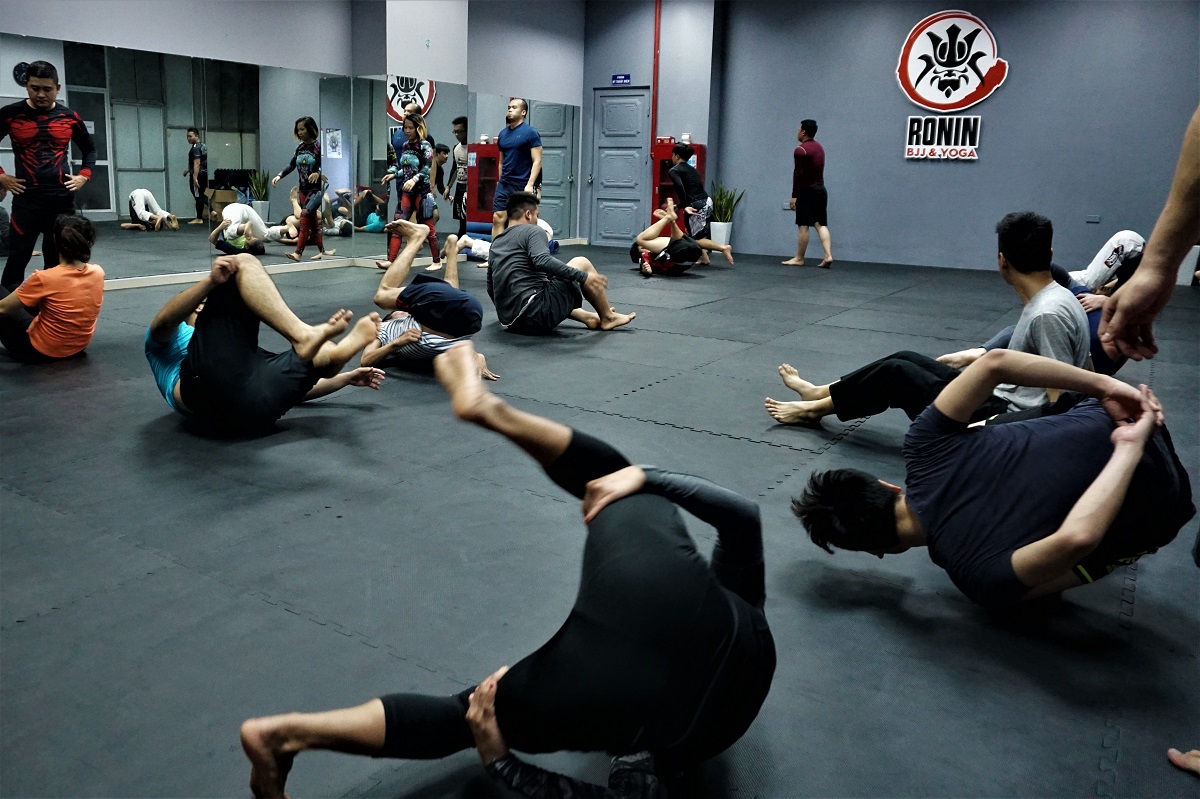 The standard jits warm up then. Shrimps, drills, front rolls, back rolls, runs etc. This was tiring stuff.
Some movement specific drills, leg drag passes, knee on belly switches and granby rolls to end the warm up.

The guys had been working on side control escapes up to this point so as this is a position I don’t favour I opted for mount escapes. There was a practical consideration to my choice in technique. 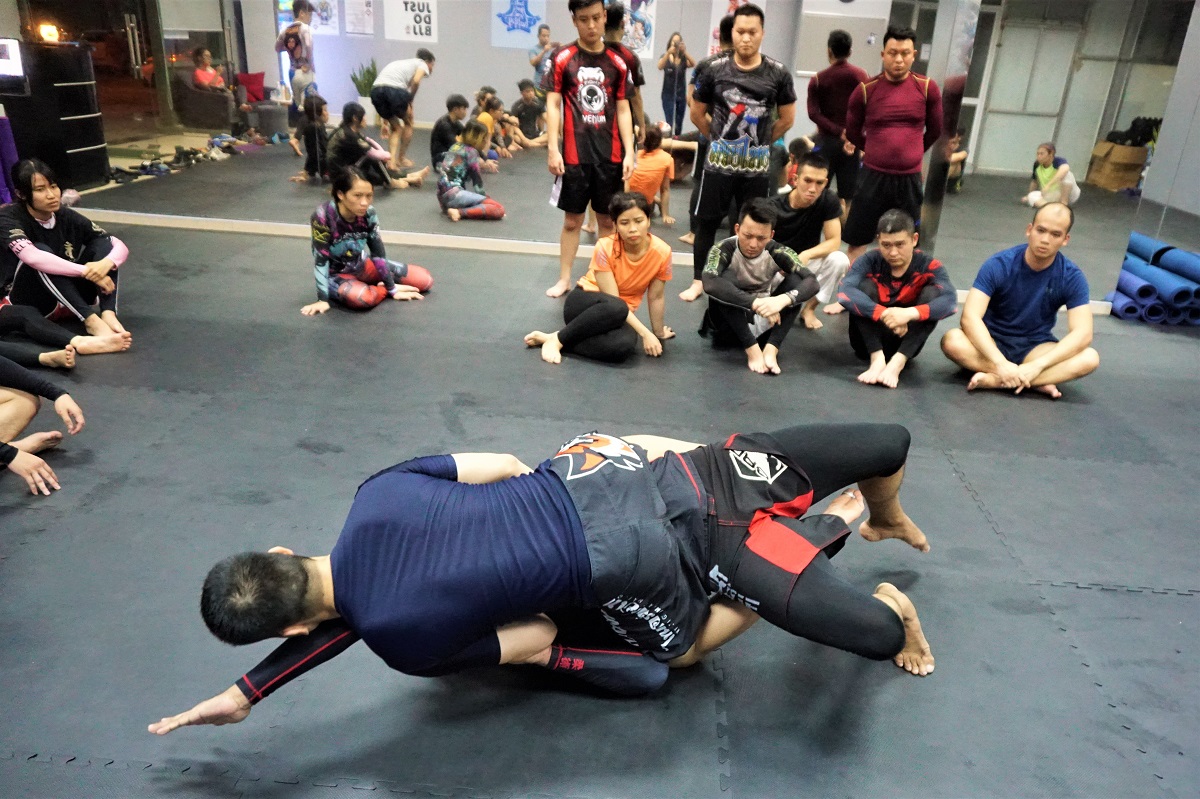 Being the biggest guy in the room I opted for something I thought useful for all involved.
The classic trap and roll.
Something easily digestible as there were many newcomers and white belts.
The enthusiasm showed as once in pairs the group was quick to pick up the technique.
They were hungry for more. 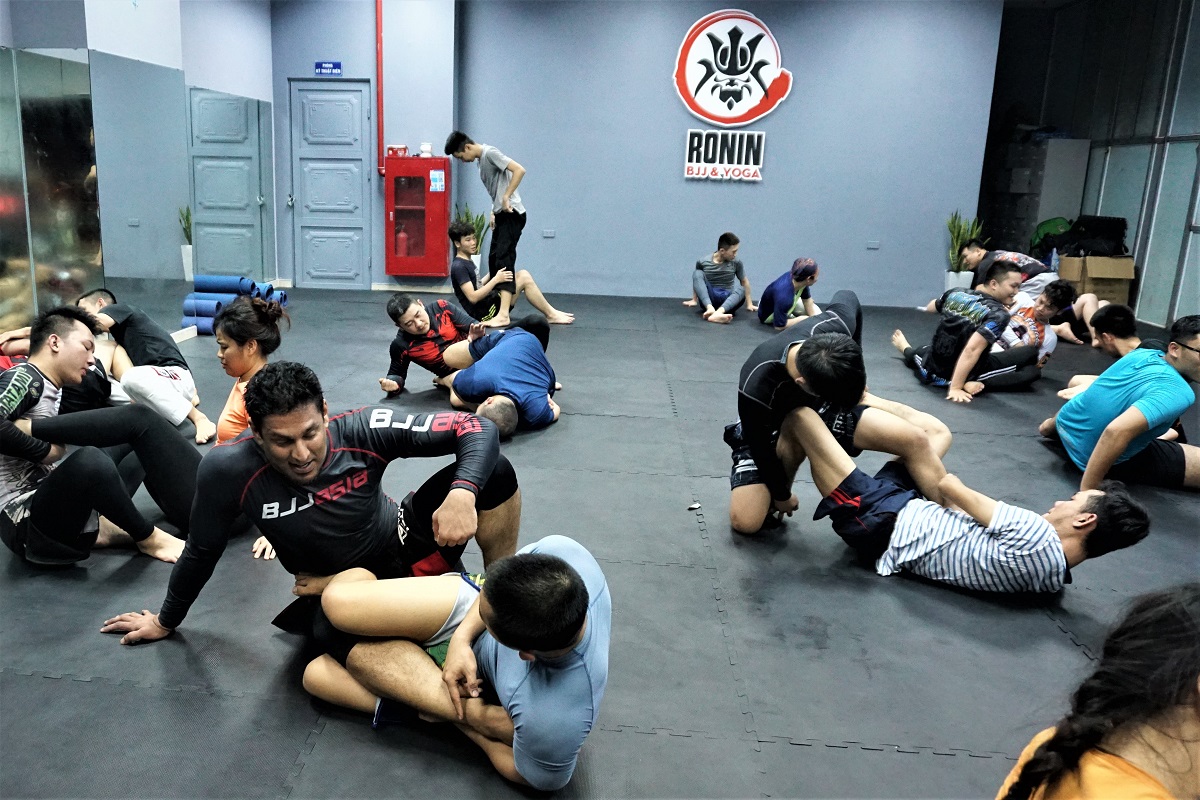 Fuck it, try a leg lock

I added in the elbow knee escape from mount with an ashi garami ankle lock to confuse the fuck out of everyone. Thereafter I threw in the heel hook for good measure and why not.

The instruction was well received but I really butchered the technique as I haven’t had to articulate it to anyone before. I just executed it intuitively.
This made me realise how important teaching is to improving my own jits and reminded me of the old adage that when one teaches, two learn. 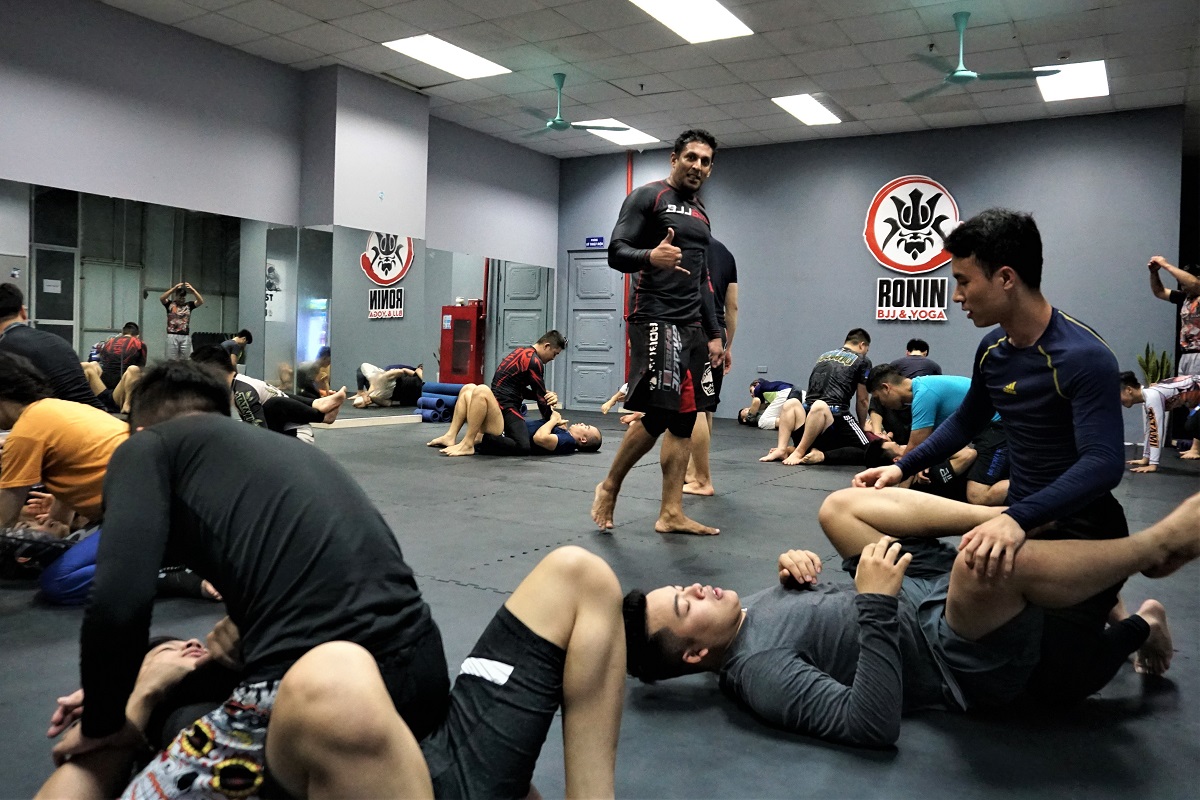 Ninety minutes had flown by and the class ended with some light rolls and the mandatory group photo. What these guys lacked in experience and ability they made up for in curiosity and enthusiasm. 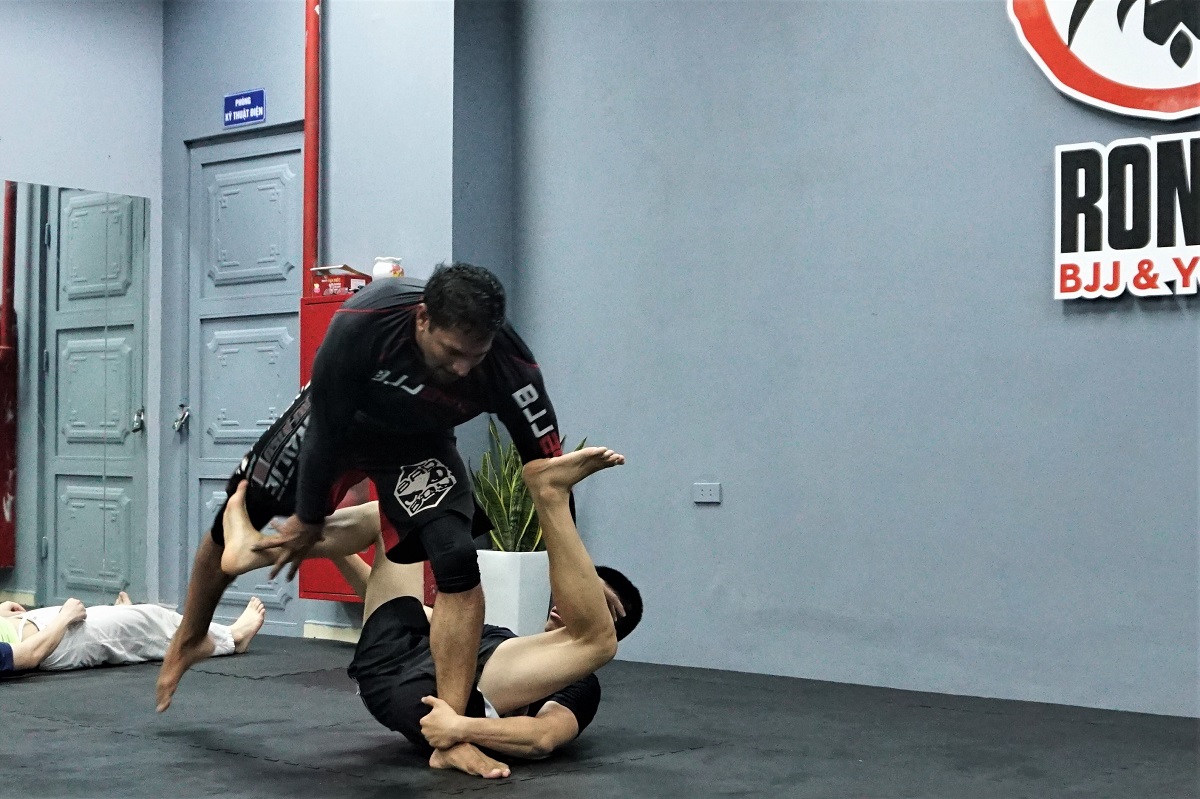 All in all a thoroughly enjoyable experience and a great place to train with young and dedicated Jiu Jitsokas.
I wish the Ronin BJJ crew the best of luck with their club and I only see jits growing in this part of the world.
It’s great to witness the sport in the embryonic stage of growth as in Ronin. 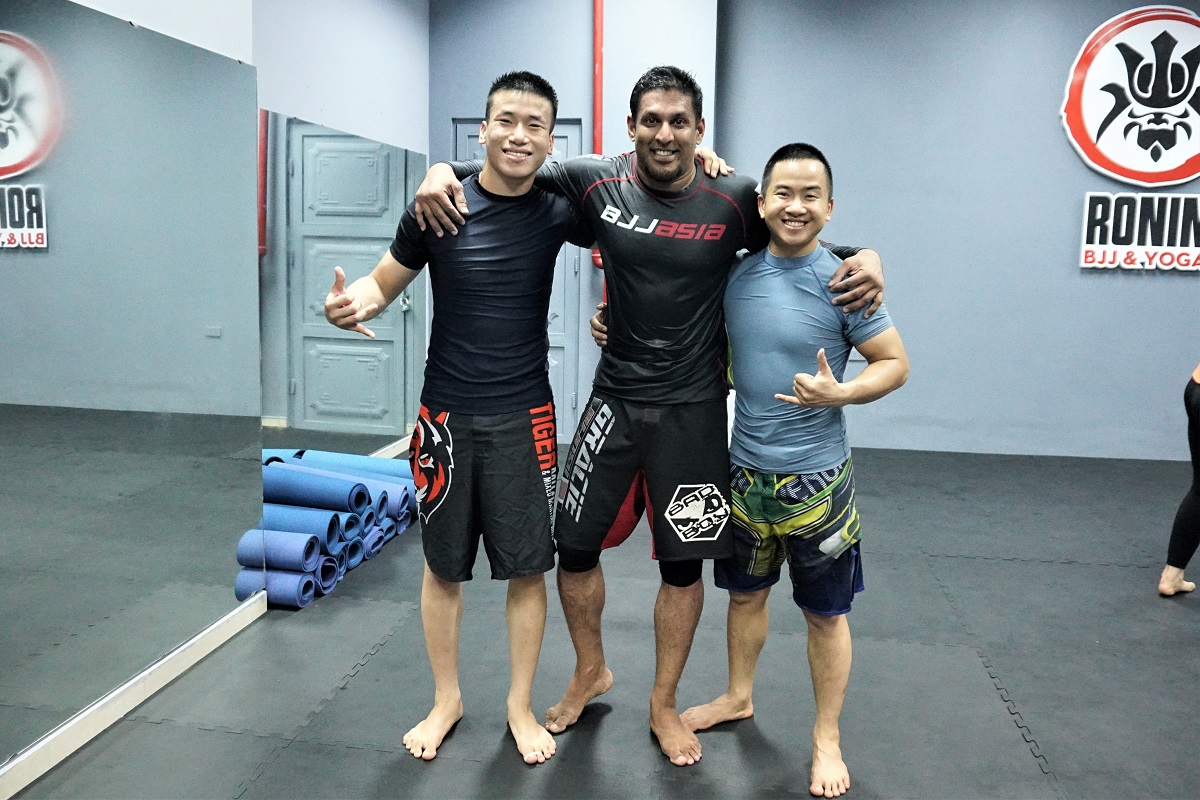 These guys are scholars & fighters

It was now time to get some phood. Pho being my absolute favourite dish!
I’m partial to the local cuisine and Hanoi is a foodie paradise.
Bún chả, Phở, Bánh cuốn, Gỏi cuốn, Bánh mì, Ca Kho To and the list goes on. 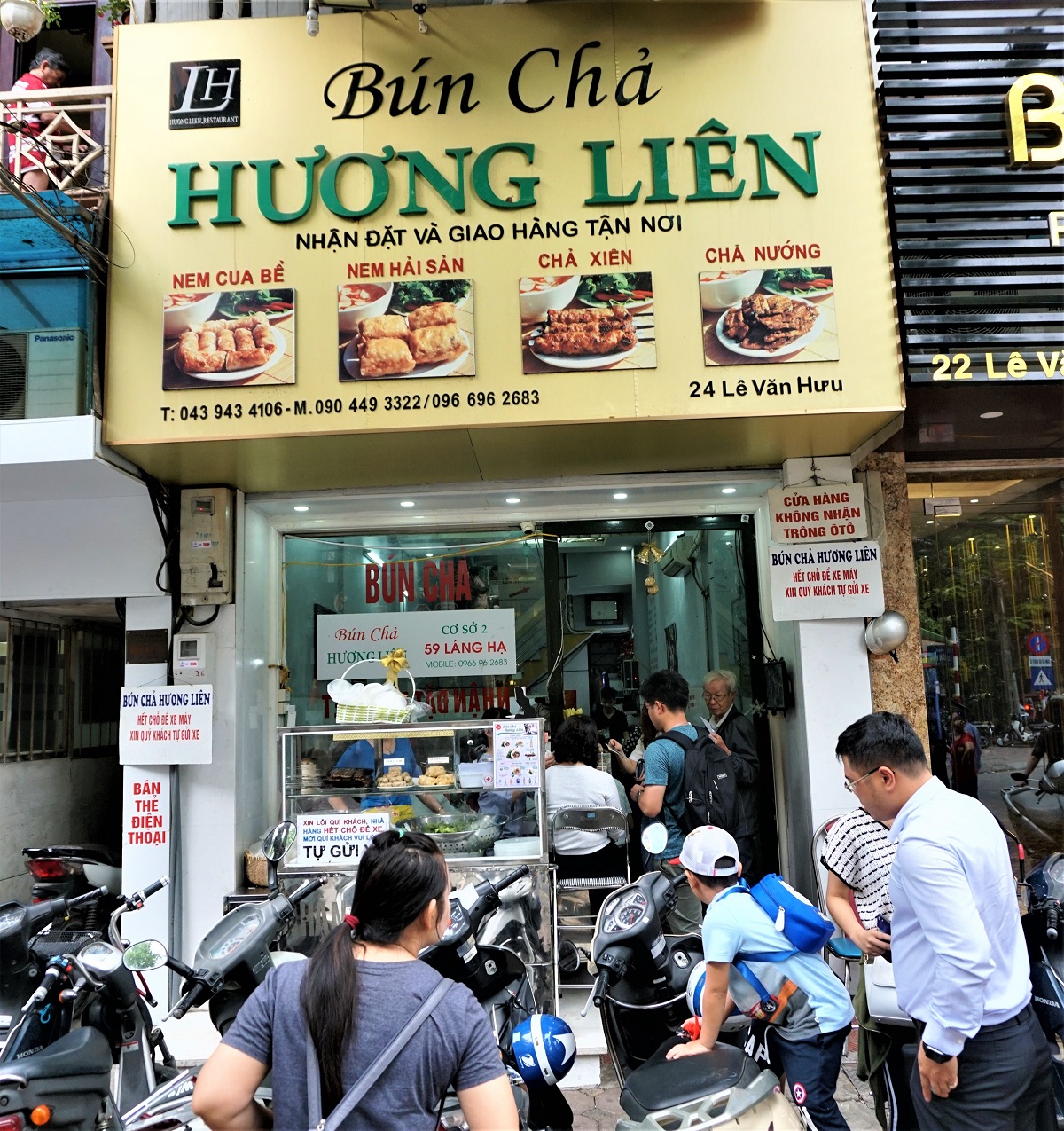 Two factors primarily define my holiday plans. The first is of course BJJ schools and  Anthony Bourdain is the second.
No trip would be complete without following in his footsteps.
Next on the agenda was Bun Cha Huong Lien, made famous by both Bourdain and Obama sharing a meal there.

A nondescript shop house turned into a national treasure as a result of the aforementioned patrons. We were not to be disappointed. 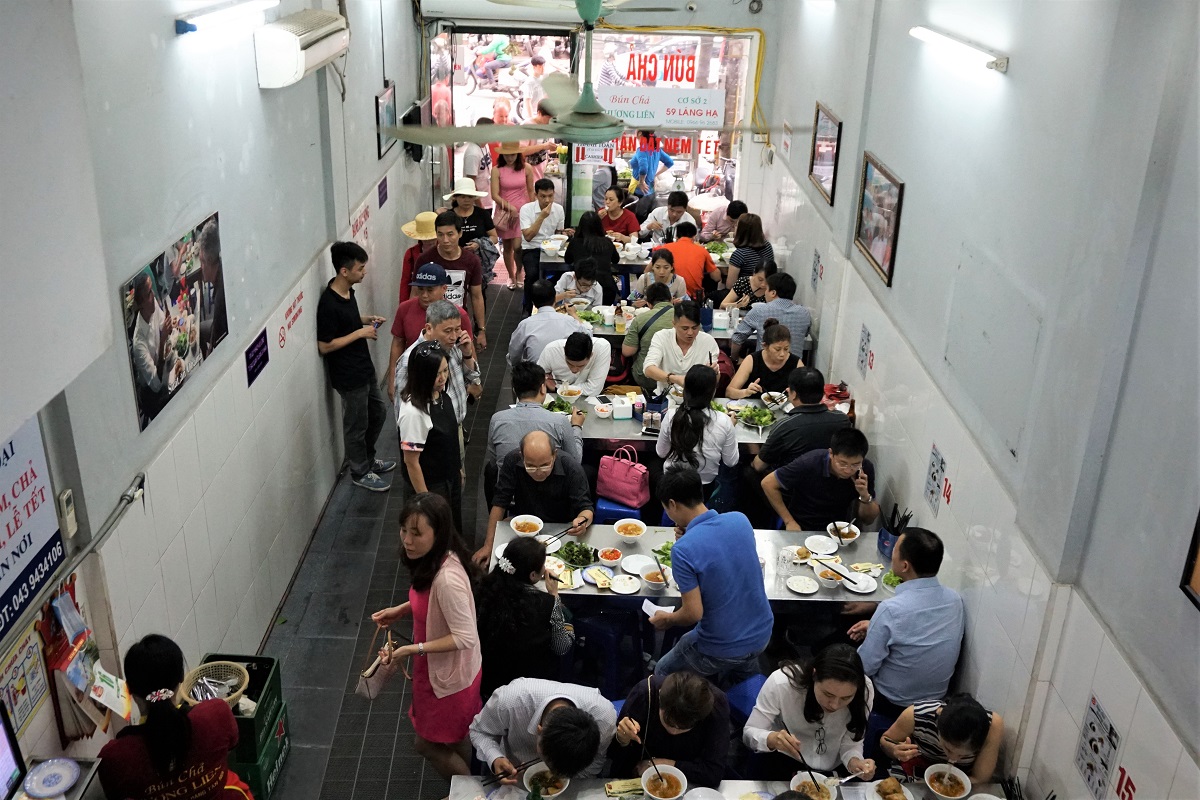 Once a local eaterie, now turned into a major tourist attraction with selfies sticks galore.

Remarkably the quality of the cuisine hadn’t suffered. 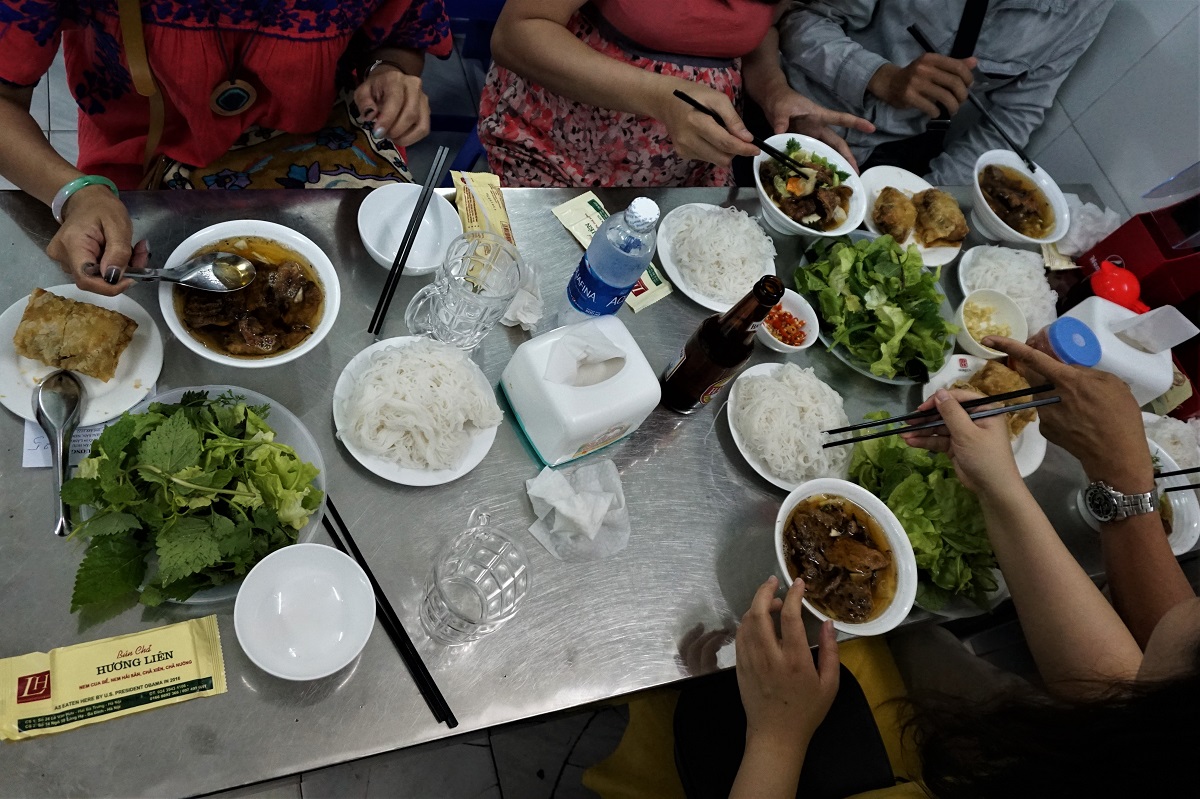 Despite the language barrier the menu has pictures to which you can just point and order, not a whole lot of choice as this is a specialist restaurant.
The “meal deal” consisted of bun cha+crab roll+ beer which was good value and the line of locals waiting to be served was a testament to the quality of the cuisine. 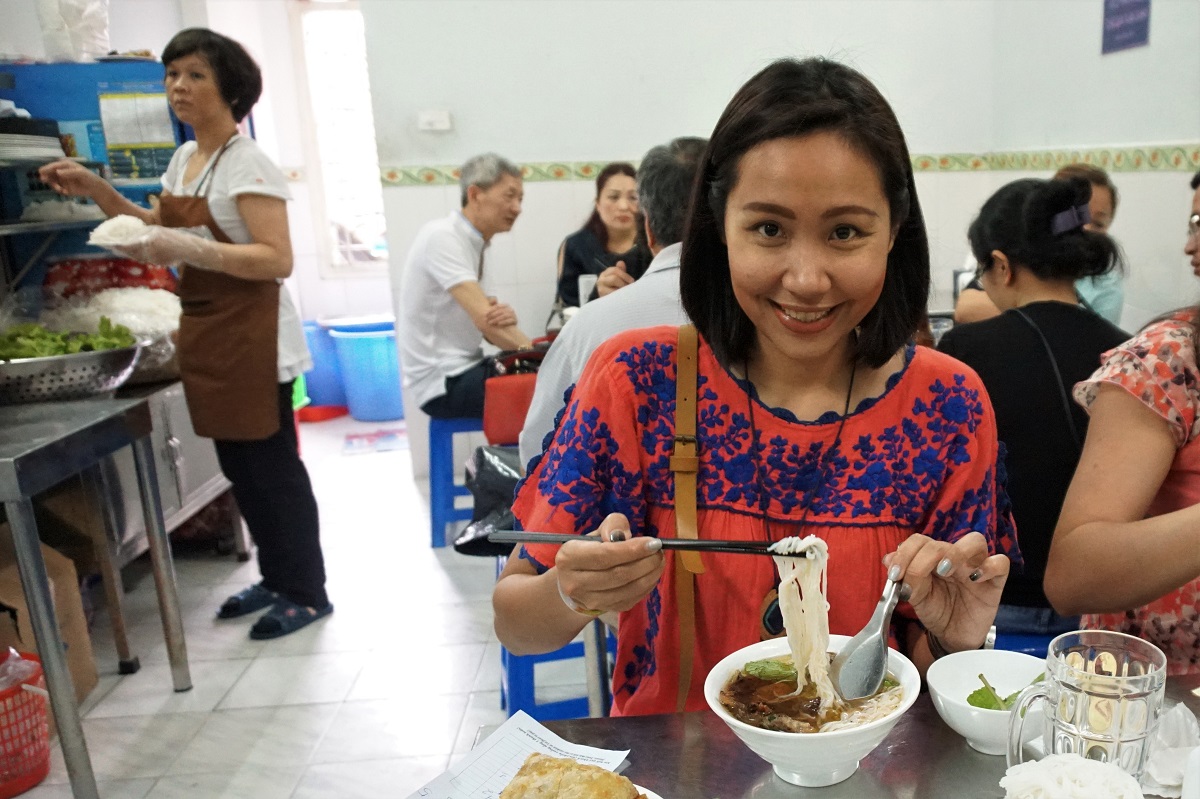 She only loves me when i feed her

The restaurant consists of communal tables with plastic stools set over three floors. The moment you sit down they place a plate of noodles and a plate of fresh herbs down in front of you. The you order your bun cha and the food comes out pretty quickly. A bowl of broth with  meat patties, herbs, chili to taste and to dip your noodles in. 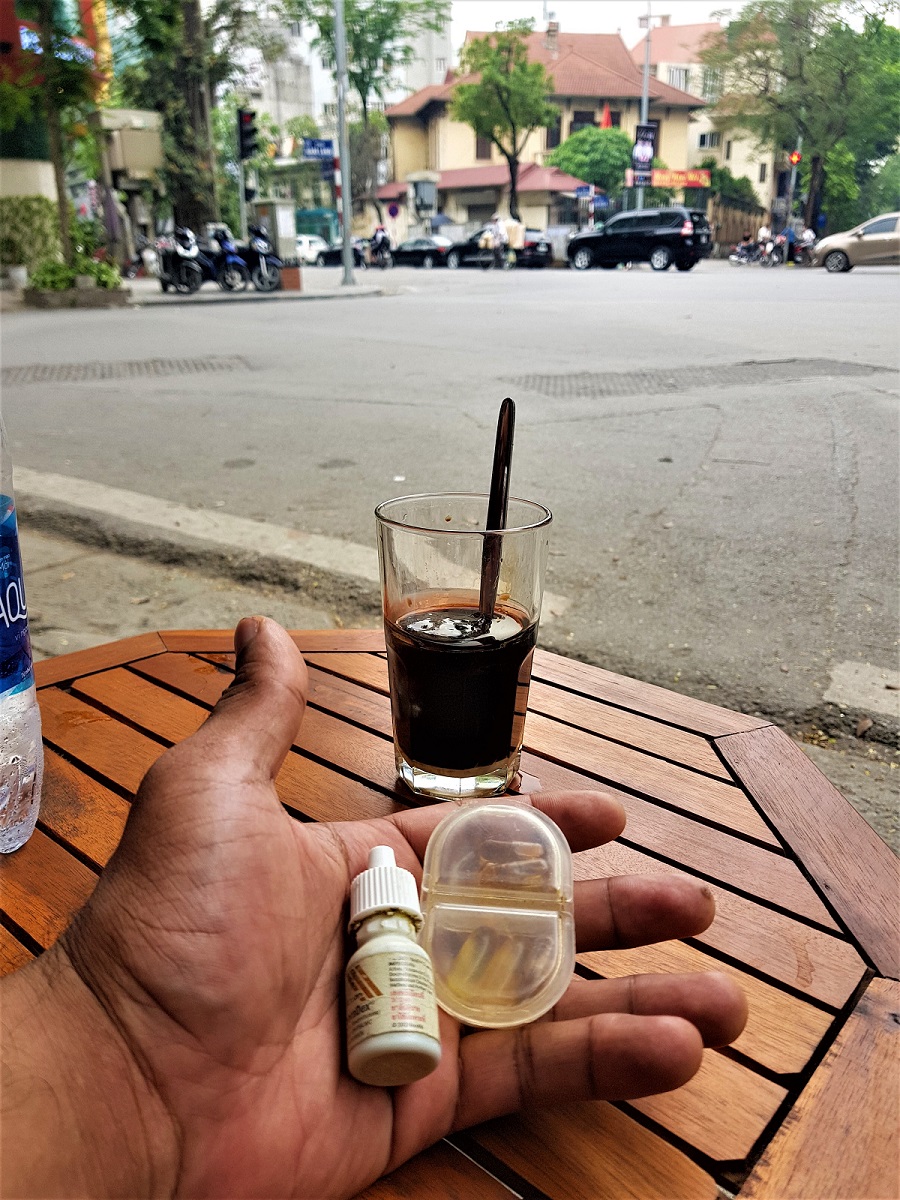 Vietnamese crack coffee and the necessary cannabinoids to counter the effects

Overly caffeinated was how I would describe this trip.
At its simplest, cà phê đá is made using medium to coarse ground dark roast Vietnamese-grown coffee with a small metal Vietnamese drip filter.

After the hot water is added, the drip filter releases drops of hot coffee slowly into a cup. This cup of hot coffee is mixed with condensed milk then quickly poured into a glass full of ice making the finished Vietnamese iced coffee. It is the crack of the Orient for me. It’s everywhere and I have little resistance to it. 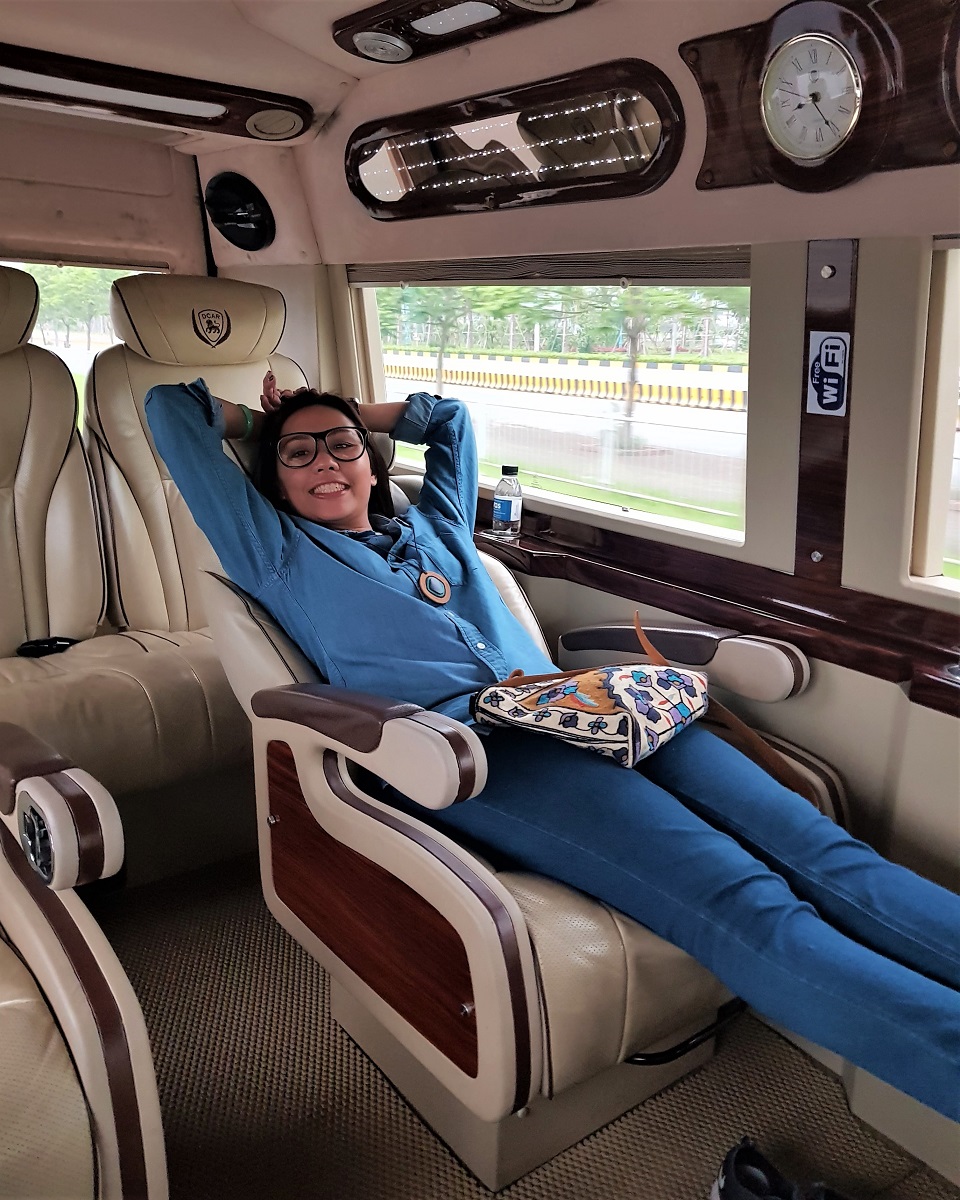 Sapa was next on the agenda and a 5 hour drive into the mountains in a baller bus.
Sapa was however under construction.
A sad consequence of previously stated development was the unfortunate reality.
Unadulterated capitalism rendered the previously majestic mountain retreat a sad former shadow of itself.
It’s just a building site with the locals now conditioned to harass the tourists.
Hardly the idyllic mountain rice terrace hideaway I imagined. 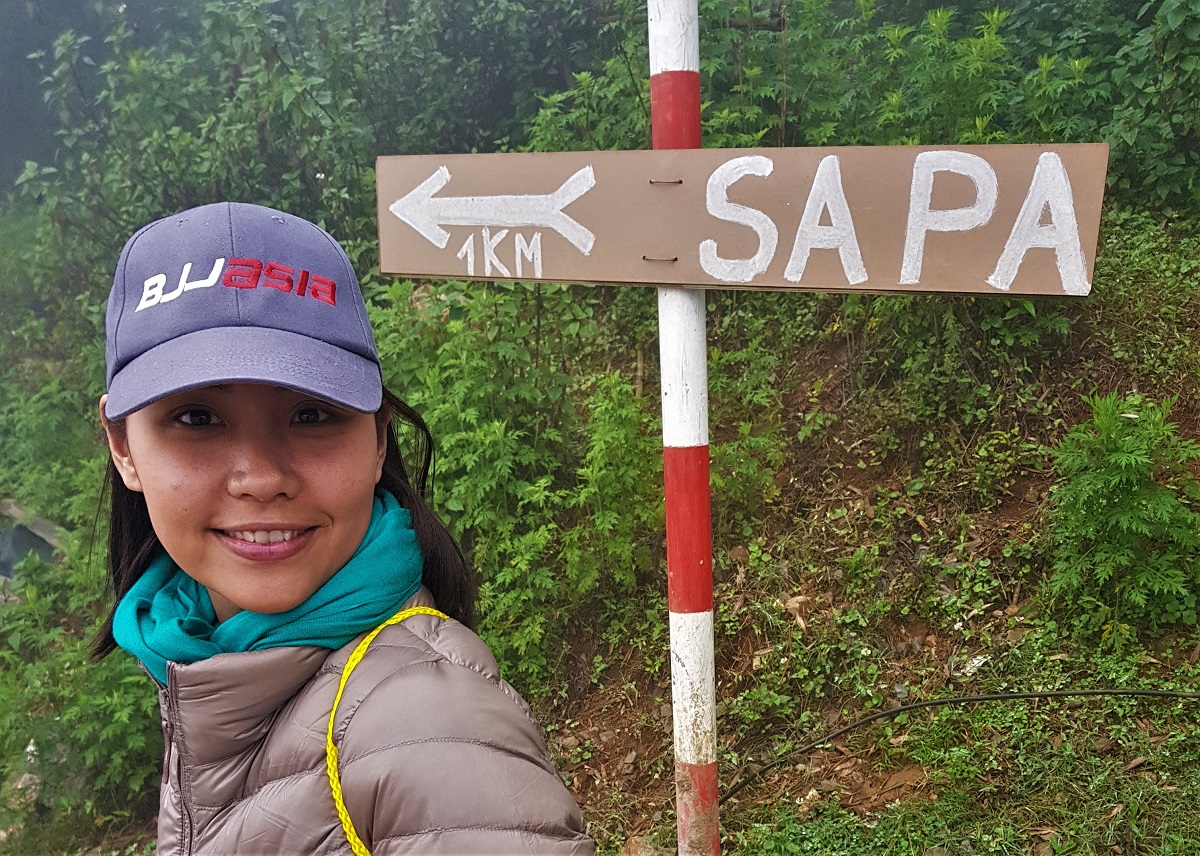 This coupled with constant rain rendered this part of the trip a failure. Thankfully my better half booked us into one of the finer mountain retreat resorts so we were holed up in luxury for the majority of the trip. Pao’s Sapa Leisure Hotel is nestled in a favourable hillside position, overlooking the  majestic mountains, moss-green rice terrace plots and the poetic Muong Hoa valley and I would highly recommend it given the need for rest and recuperation after the long drive and arduous hiking to come.

All was not lost because of the weather as I used this time catch up on some much needed research and reading. As well as to consume far to much condensed milk coffee to he healthy.

The fruits of my labour can be viewed here: http://www.globalmacrocapital.com/let-loose-dogs-war/ 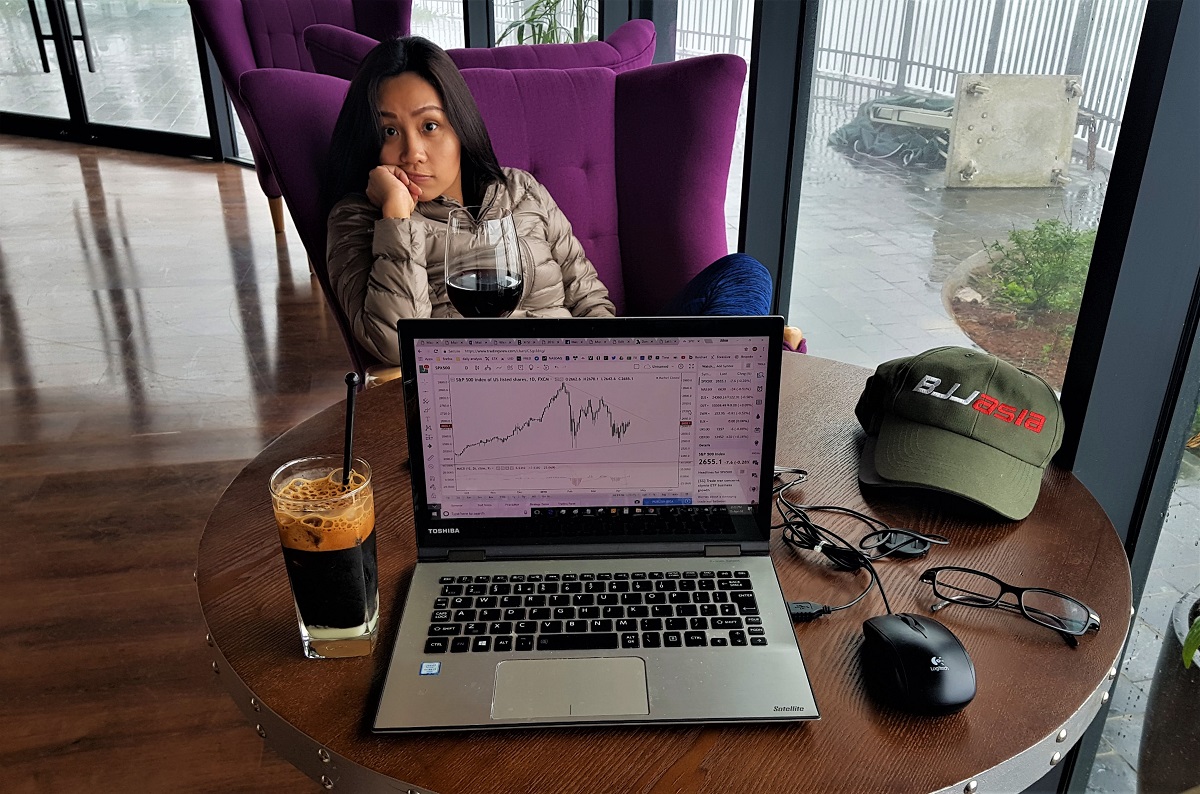 Fraulein isn’t impressed when I work during holiday hours

Vietnam has a special charm that will keep me coming back.
Especially to Hanoi.
Instead of tearing down the old quarter, the locals have preserved and gentrified it.
Parts of Hanoi feel like Paris with tree lined boulevards, wide cobbled pavements and the remnants of French colonial architecture. 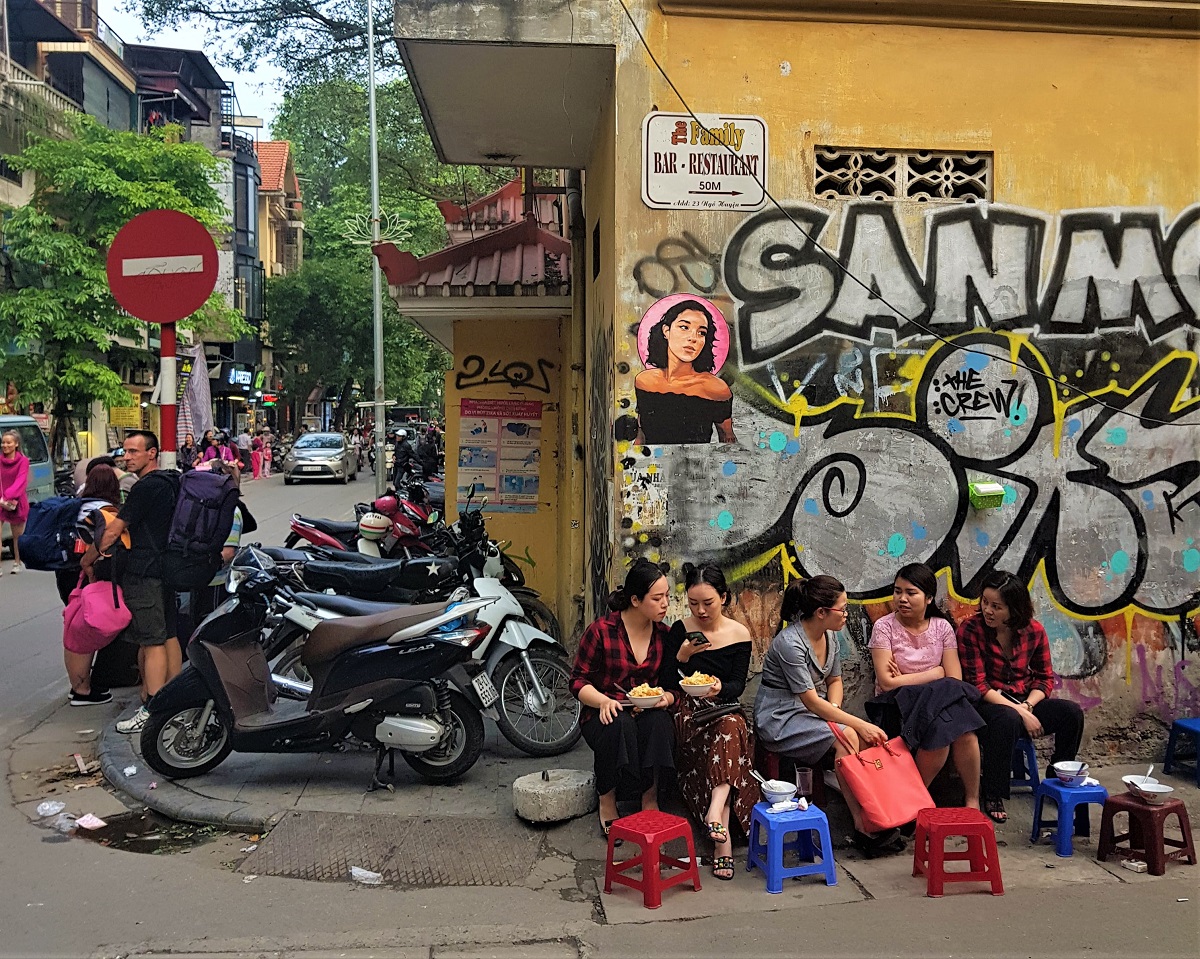 Got to protect those corners

Photo’s like the one above is not an uncommon sight on the streets of Hanoi. For the most part, it’s the women that run the street food stalls, and when they’re not serving up something delicious, they’re either chatting animatedly with their companions, or staring off into space. 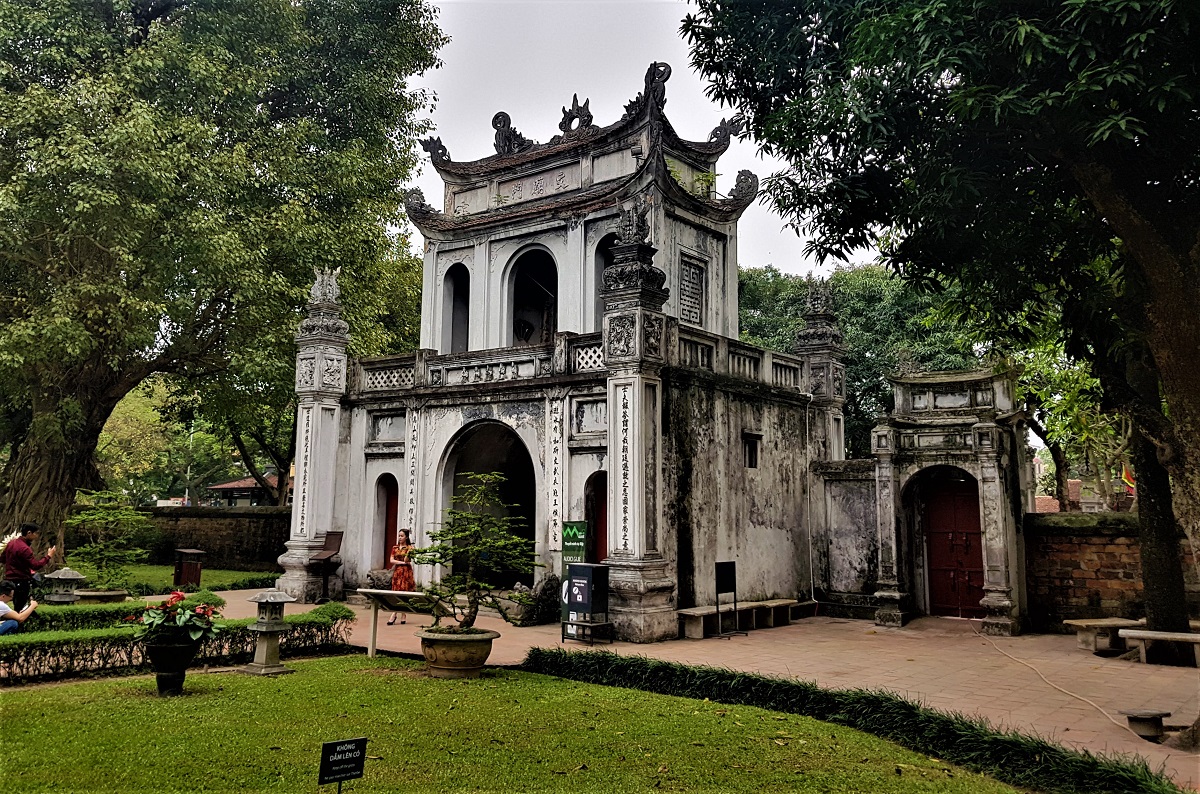 Sony, Nike and even China  have off-shored their manufacturing bases here and it’s not hard to see this becoming one of the cities of the future. Temperate climate, an educated populace and local government’s that appear to be learning from the mistakes of their neighbours.

Come to think of it, this is actually a digital nomads paradise and I don’t believe it will be long before the western hordes follow.
I’m long Vietnam (VNM). 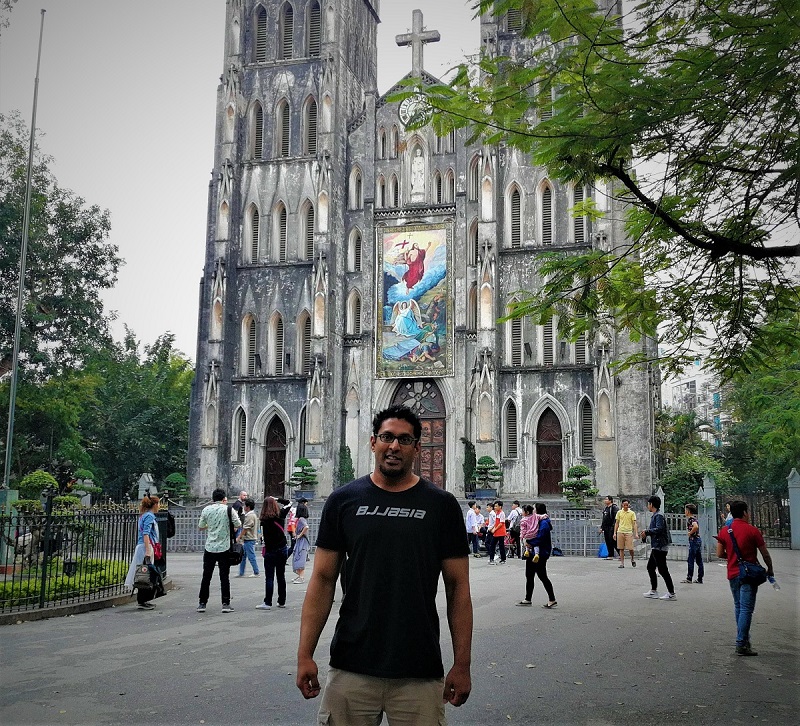