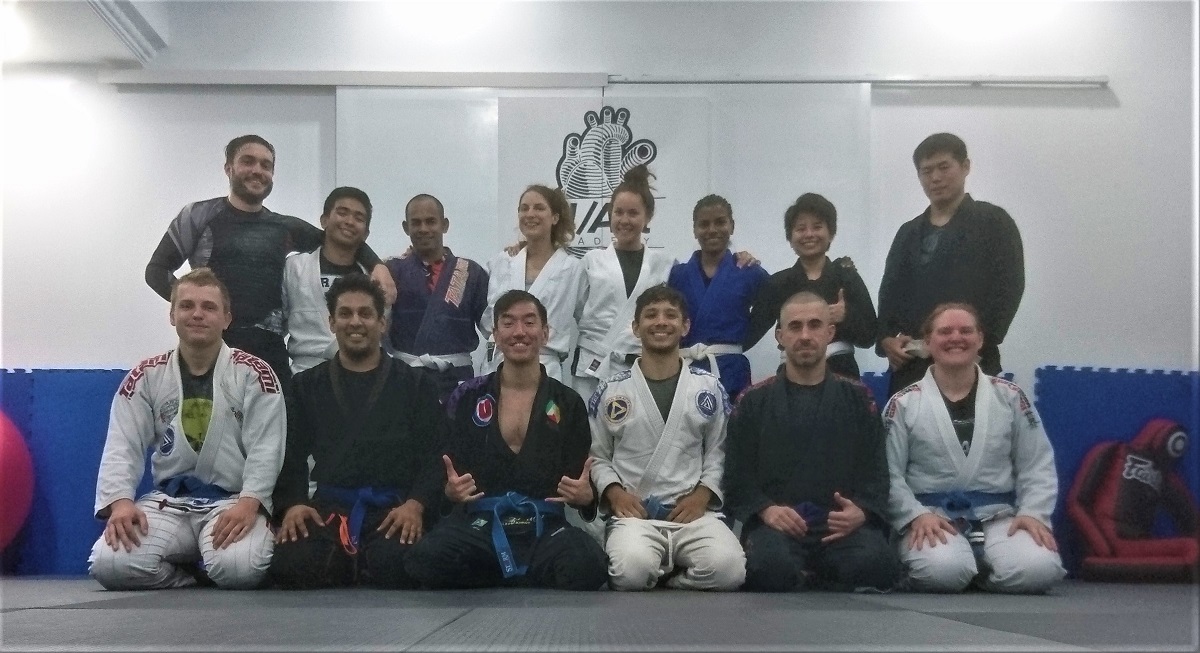 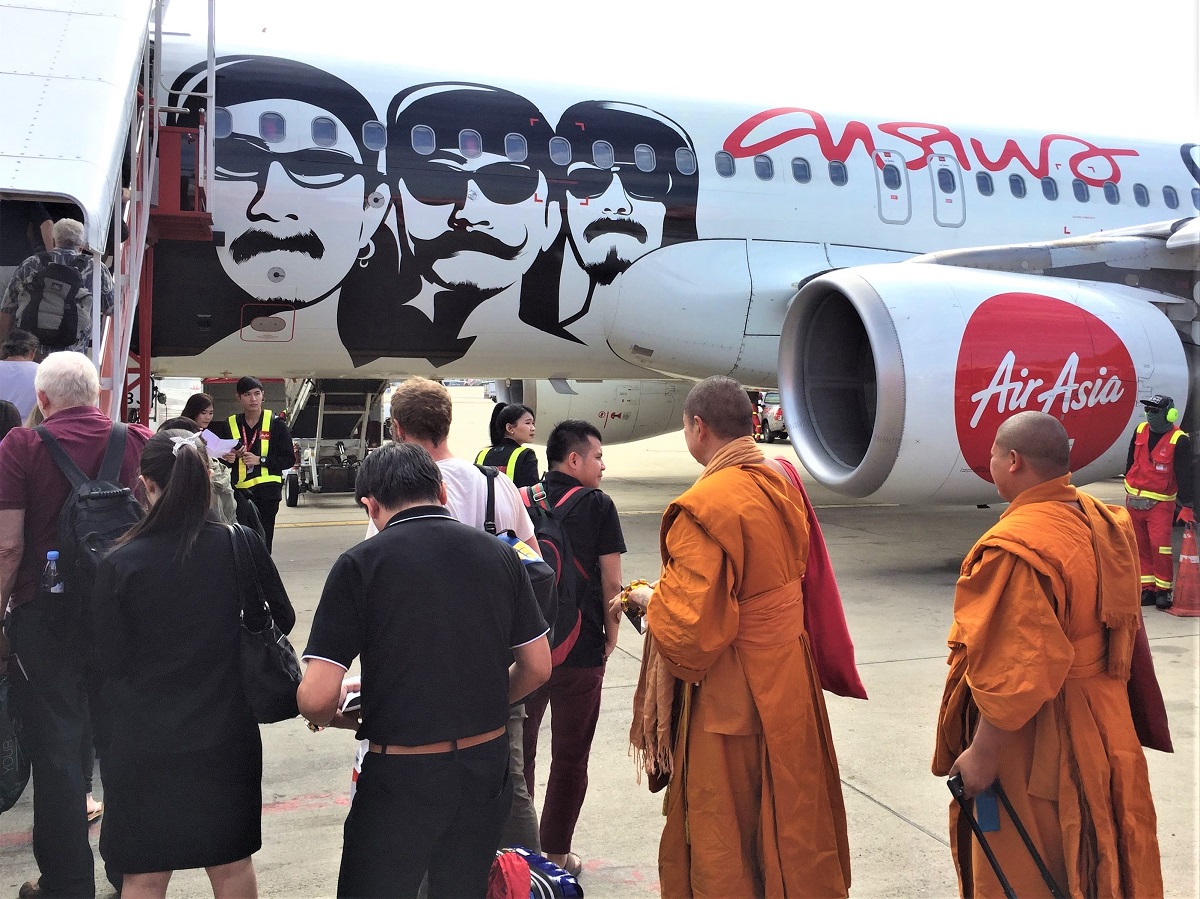 The first weekend of December has traditionally been Thai Father’s Day and is celebrated as a national holiday with a long weekend.

Each year we tend to take a cultural trip to a neighboring country for a bit of a break before the impending Christmas and festive season begins.

On this particular occasion we hadn’t made any plans and upon discovering there wasn’t going to be an open mat and most of our cohorts had already left the city, we hastily decided to go to the Cambodia.

If we were going to make it to Phenom Penh and be able to attend the local BJJ club’s evening training session, we’d have to fly, but AirAsia doesn’t allow you to book a flight within 90 mins of takeoff, so off to the airport we went, paying our jittery meth intoxicated driver a little extra to make sure he didn’t break unnecessarily.

If we missed the flight we’d go by land to Siem Reap and just have to settle with attacking the odd visa-run English teacher in the street to get our grappling fix on.

As luck would have it there were seats.

Cash paid, red seats chosen, no time to pre-book Uncle Chin’s Chicken Rice Combo.  Straight to the Miracle Lounge before boarding where the pre-flight ritual of cabernet, benzos and other edibles were downed.

A short psychedelic flight later and we arrived in a hot and dusty Phnom Pehn where a tuk tuk was on hand to take us into the city. 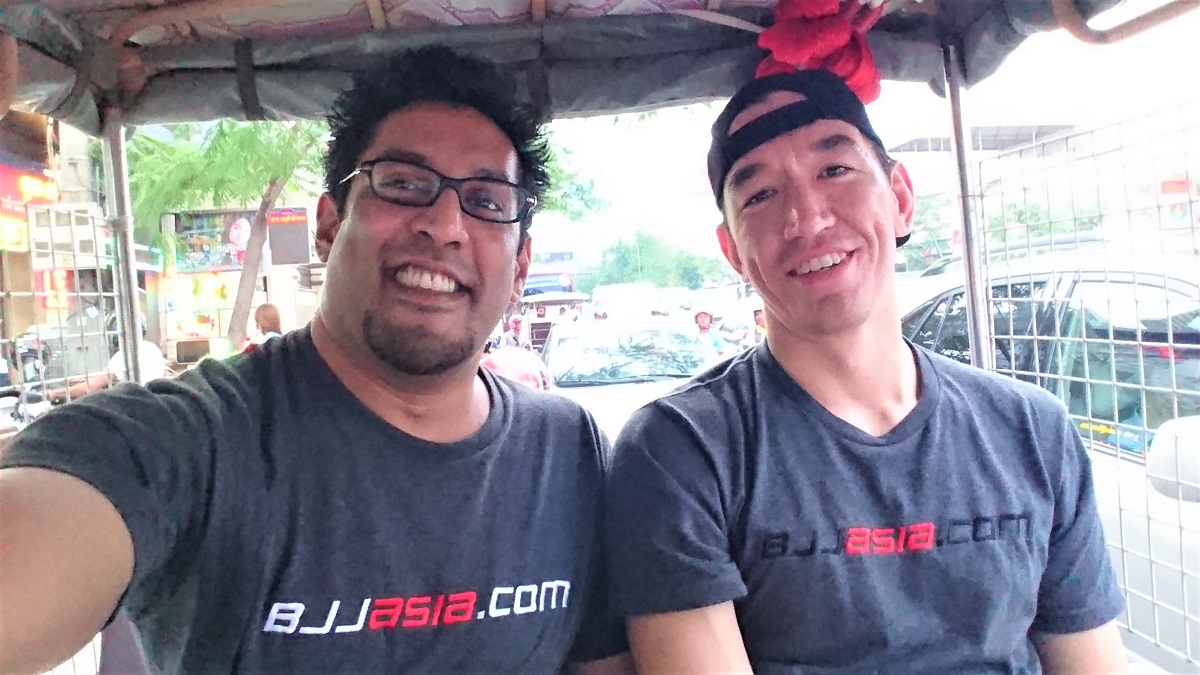 Also, it would probably be easier to find someone at the gym to help us score. There is no subsitute for local knowledge after all.

This was not to be the case.

Found the gym which was no easy feat. On the top floor of a non-descript building. Class was delayed till we got ready. These guys were serious. No keeping it playful and that was regarding the warm up.

The class started of with the usual warm up, shrimp, hip escape, belt pulls.
A typical jits warm up we have been accustomed to experiencing at any one of a number of academies around the world.
Technique revolved around side control to kesa gatame to north south to reverse scarf hold back to side control.
Simple enough but the long day of travel, humidity, dust and inebriates made the tasks quite straining.
These positions and transitions were drilled ad nauseum.
But then an addition of a submission to each of the aforementioned positions made things interesting.
I was beginning to see the merit in this structured methodology of teaching. 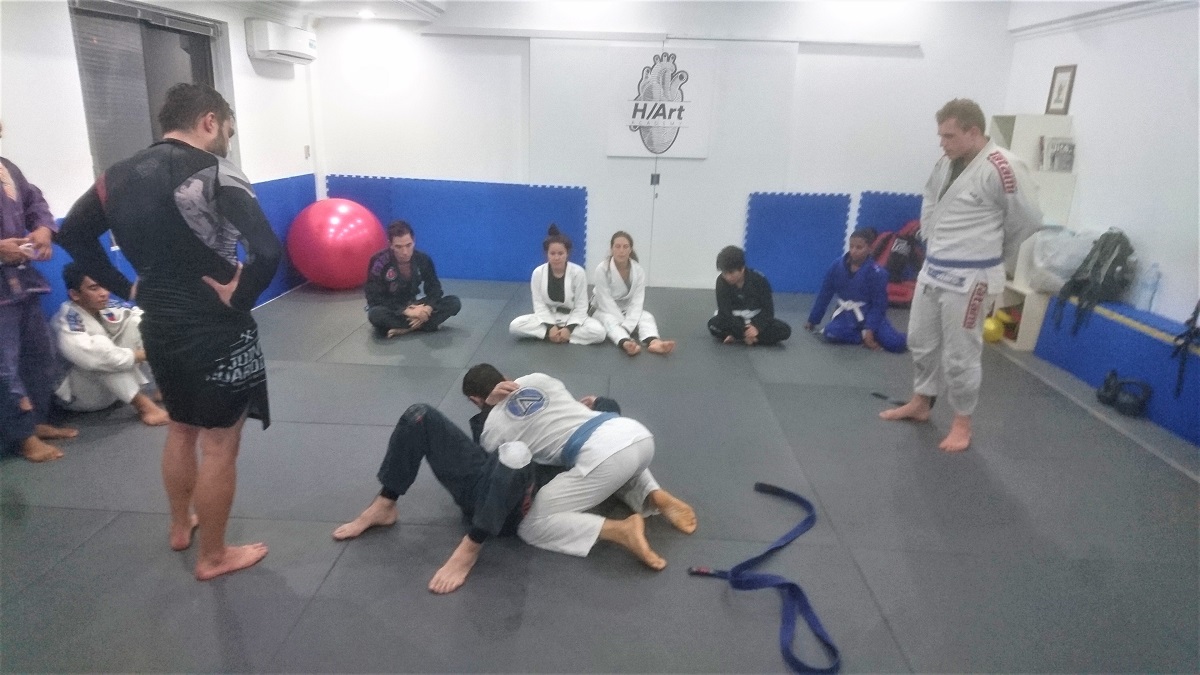 Vi the instructor would call out numbers relating to the positions and we would transition to them.
Americana from side control then arm in guillotine from north south.
Deep grip to armpit then control hip with free hand IE don’t RNC your arms.
Then a bit of free flowing through same routine.
It was a beginners class so there was no sparring but we were exhausted from intense drilling.
We had to hastily make our way off the mats as a women’s class was about to begin.
Small shower facilities were available so that was useful as the sweat and dust combined to form a fine layer of mud on the skin.

It  was dark, we were drenched in sweat and in soaking wet clothing. It was time to find our hotel.

Turns out we were staying in what seemed to be a set from Dr Strange.

And this was before the psychotropics. 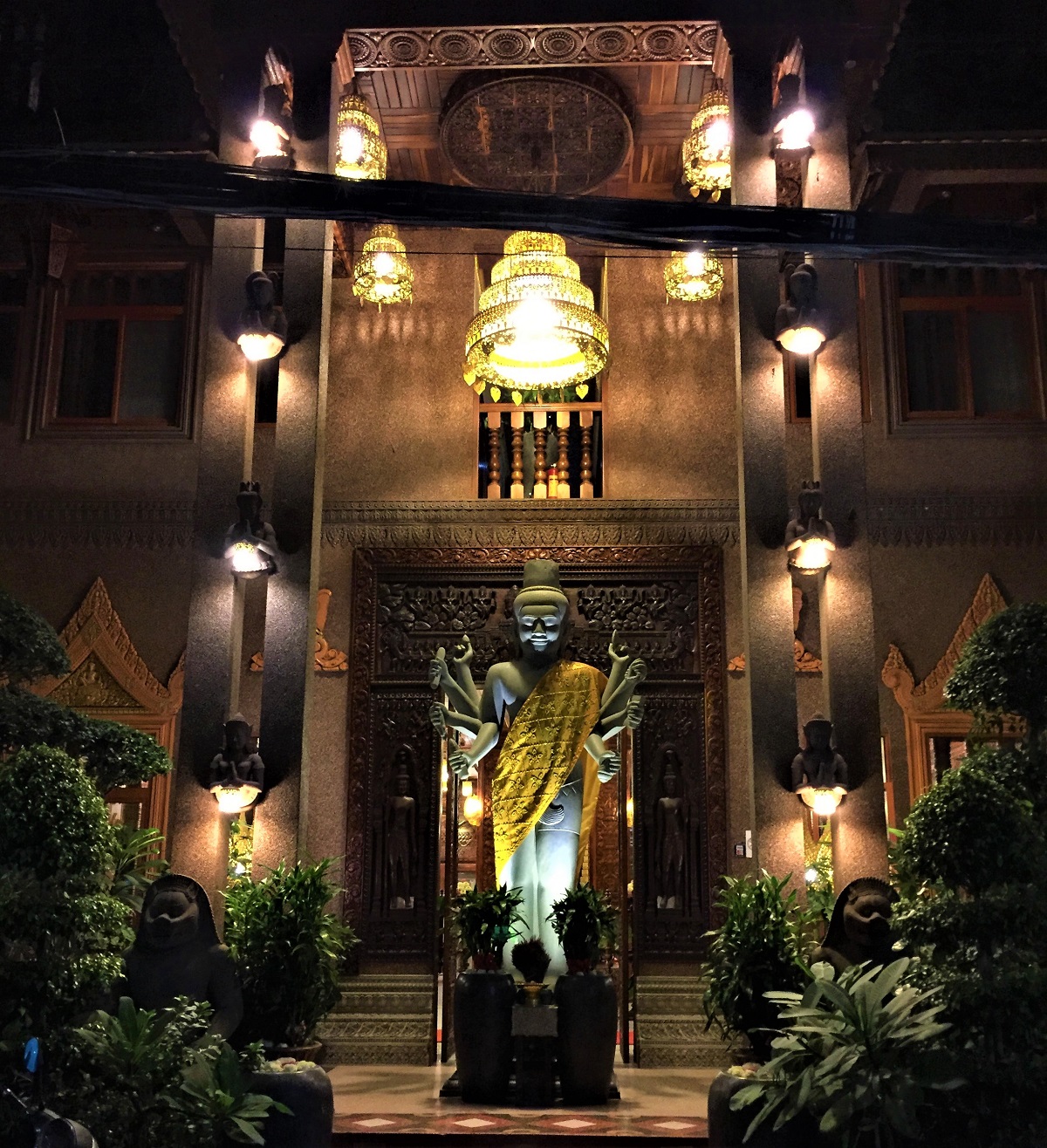 We decided to hit the hard rocking Miami of Asian nightlife.

Alas such a place does not exist in Phnom Penh.

We ended up at some techno dive which also felt like a brothel.

My kind of music but sadly my comrade was abhorred by the situation.

We commandeered a tuk tuk drive to be our steward for the evening.

We assumed he could understand our English but that assumption was proven false.

After requesting for the fourth time to take us to the bar recommended on TripAdvisor and taken to a third brothel he acquiesced.

So no clubs, no bars, no entertainment. The only thing left to do was check out the local primary health care facilities and see what party prescriptions were available.

Awoke in somewhat of a haze in no mood for anything apart from recovering from the previous evenings bender.
Sadly recovery was not to be the case.
We headed down for the Saturday afternoon class which turned out to be their competition class.

Not sure if it was a regular feature on their calendar or just for an upcoming competition but it was brutal.
Belt pulls, single leg entries.
Fireman carry runs and squats.
Take down entry drilling.
Take down defenses.
Actually more stand up than i had cumulatively done in the previous 3 years. 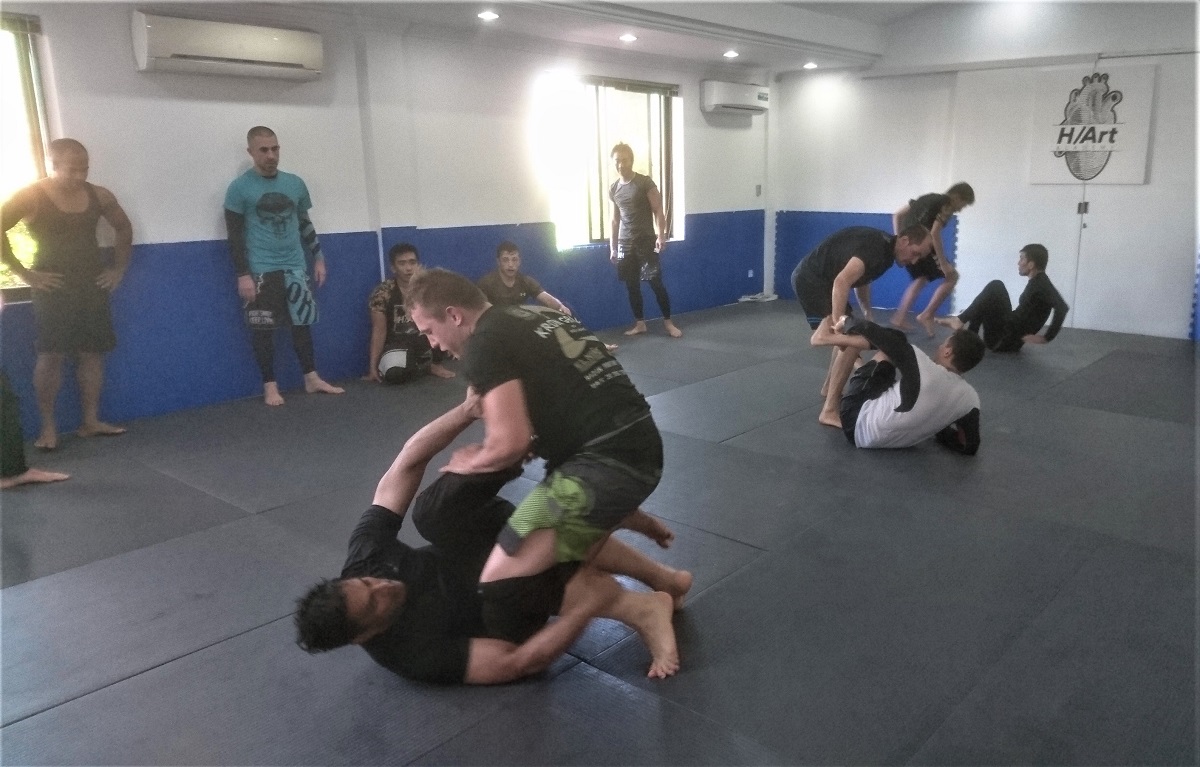 It didn’t end there.
The class was split in two teams and numbers allocated to each individual.
I guess these Cambodians really like their games.
Then something I had not experienced before.
30 second tag team sparring.
Every 30 seconds teams exchange players into position of previous match.
If there is a sub, other team does 20 push ups.
Really fun and a throwback to my youth watching the old WWF.
Vi was being interviewed at same time by film crew for local Cambodian TV.
Chuckled by idea of being on Cambodian TV somewhere in background.
All of this was followed by king of mat.
Yes we were still training.
Clearly these lads weren’t aware that we compete in the masters 2 division nor were they familiar with arthritic joints or age weakened tendons.
Though we persevered.
3 pairs on mat, 4 minutes for guys to be continually attacked.
Bottom guy can submit but the top guy is going for positional dominance.
Lots of Kazakhs, strong, friendly and great guys.
You don’t however want them on top of you.
That concluded the session and we were still standing.
All in all a great experience.
We learnt some new technique, had a few laughs, shed some blood and enjoyed one of the best umeshu cocktails I’ve had. 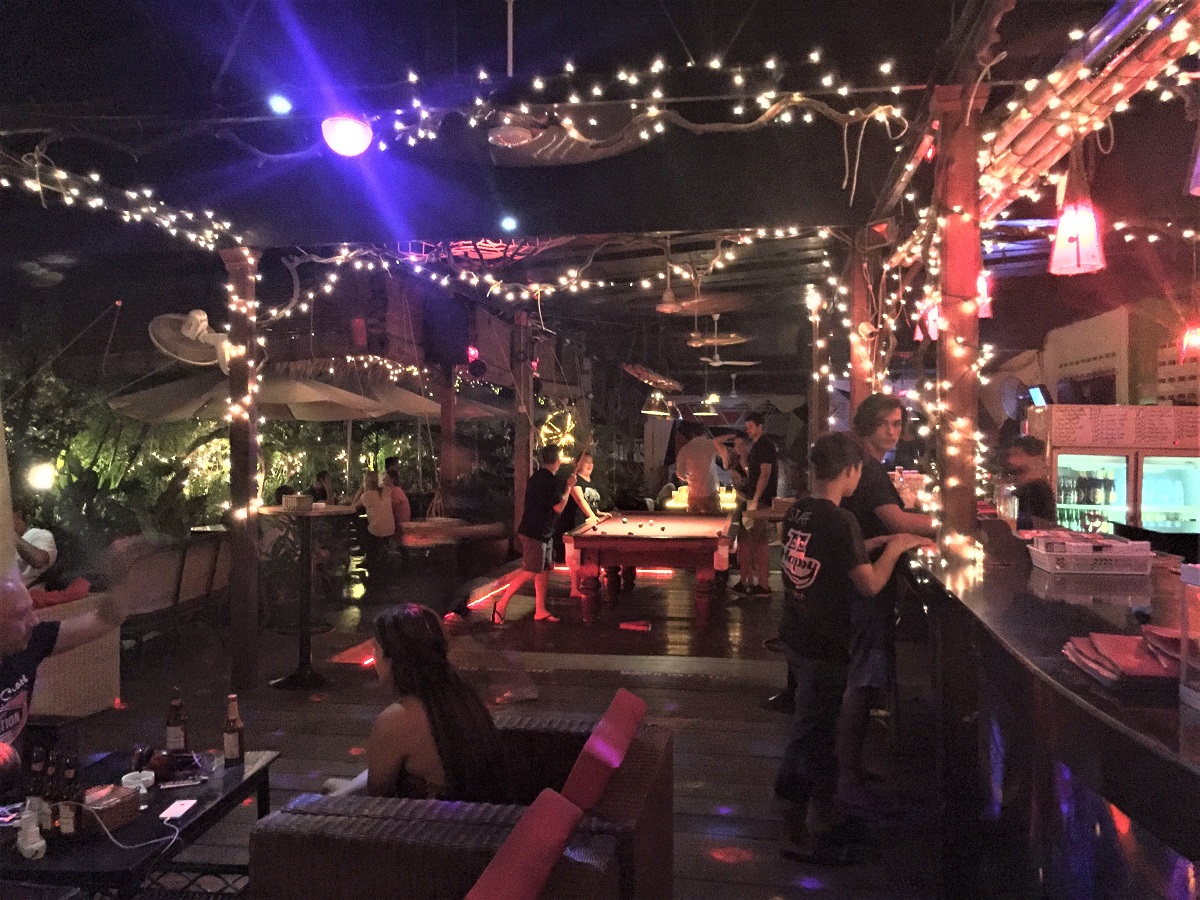 Recommended a place to go on first night, The Happy Rooftop Backpacker Bar. Cool friendly place with nitrous balloons available at the bar.
Good location and since we stayed behind royal palace it was easy to get to.
It was a brisk 20 minute walk back to hotel and got to see independence monuments on way back. Lovely at night. 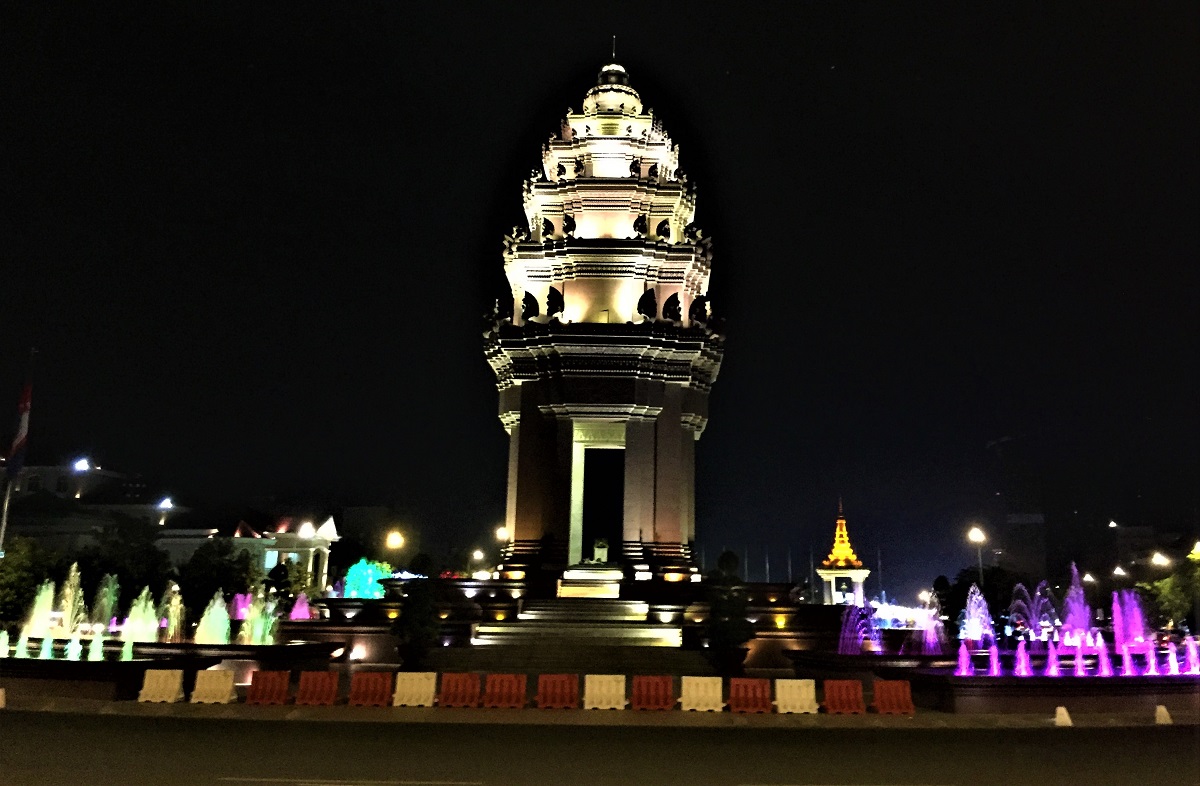 Hand stands on religious icons were not looked at favorably by security.

All in all a great bunch of lads at H/Art Academy in Phnom Penh. A small group led by a dedicated purple belt. Good work ethic and solid foundational game.

The highlight of the evening was going out for drinks at a  umeshu bar in gentrified shanty town.

Only in Phnom Penh. 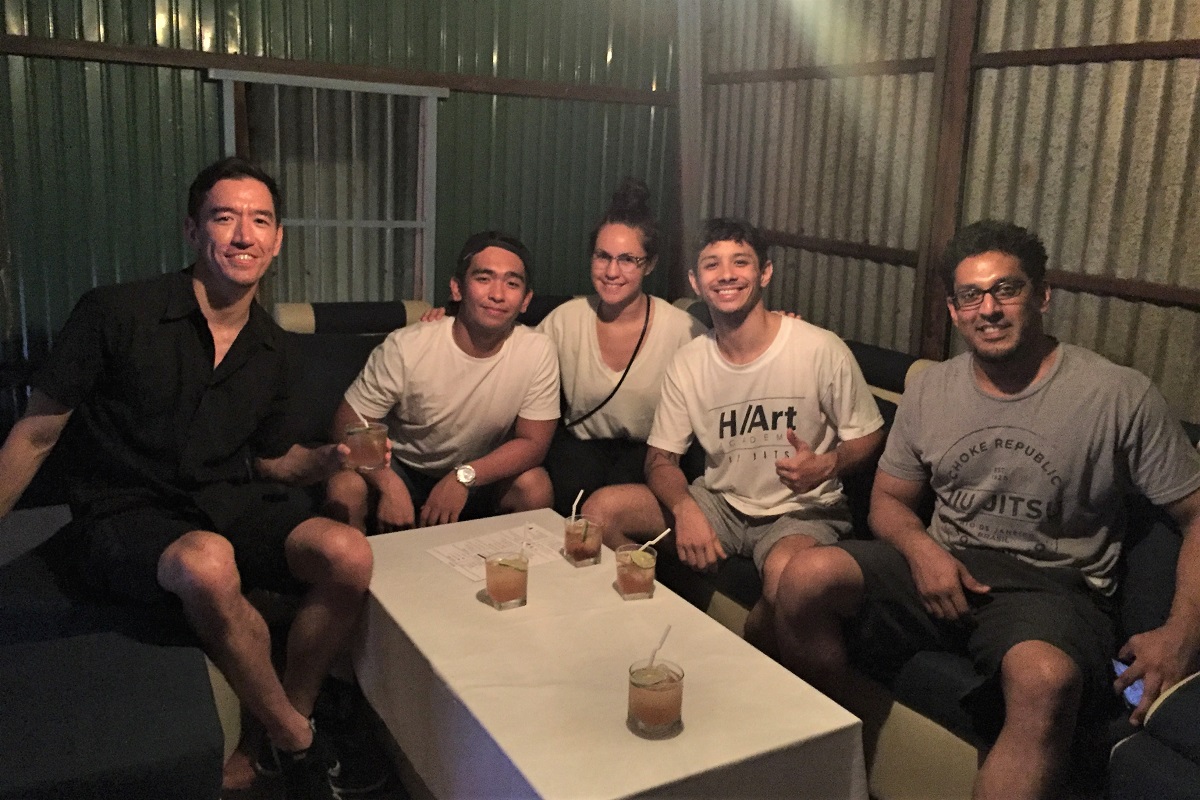 If you are ever in the area be sure to stop by and check the guys out. 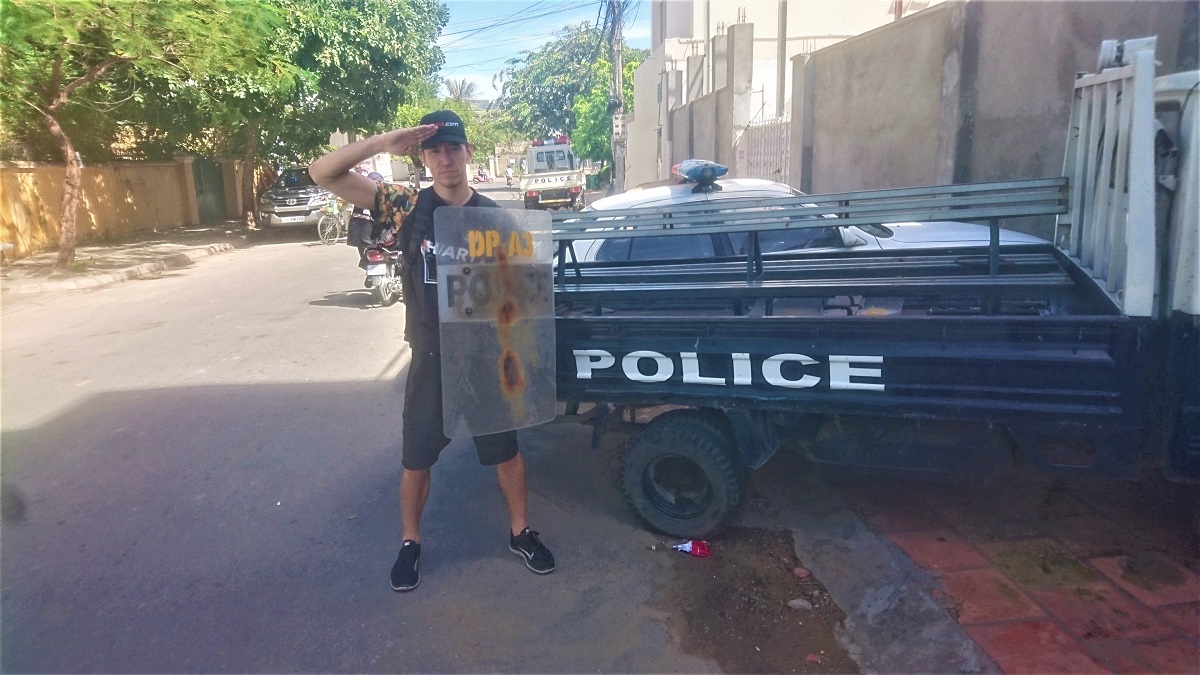