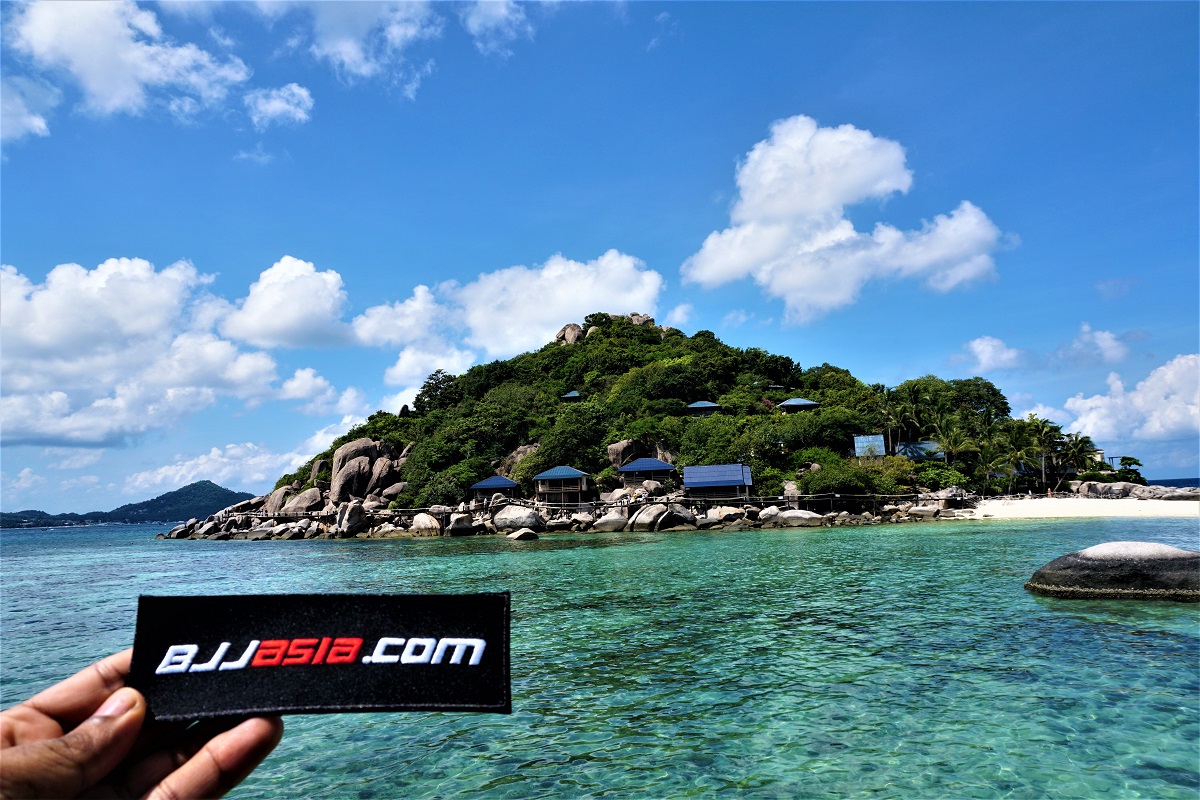 Submission grappling on a tropical island

Song Kran or “seven days of death” as it is more accurately described is Thailand’s new year festival. It coincides with spring and the coming of the rains that provide relief for farmers and the scorched earth.

The death toll during this period of festivity exceeds 500 every year and the vast majority of those fatalities stem from road accidents. So going against the only advice  that was reasonable in Thailand we decided to embark on a road trip to the south of the country.

The plan entailed driving to Chumpon and taking the ferry to Koh Tao. Somewhat of an adventure for office bound city folk. 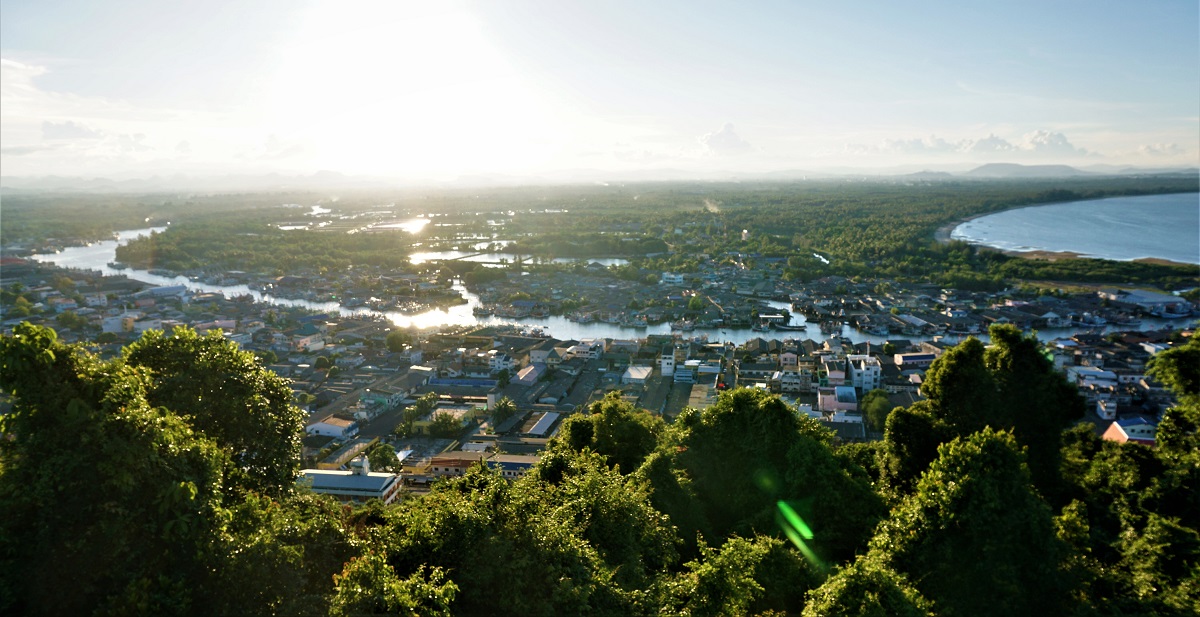 Our estimated casual 5 hour drive turned to 7  as every farmer, taxi driver and bar girl had the same idea. Get out of Bangkok for the week.

The traffic eventually petered out and the splendour of the Thai countryside came into view as the sun went down. In darkness we found our hotel and wondered how far the pier was from the hotel.

I booked a reasonably looking hotel in Chumpon town with the expectation of taking the 7am ferry the next morning. Chumpon Town as it  turns out is 35 miles from Chumpon pier.

My best laid plans were already coming undone and we hadn’t even gotten to the island yet. An ungodly 5am start with a 711 breakfast consisting off those reconstituted offal/ breakfast croissants and a couple of M150’s (to those not in the know, M150 is Red Bull with crack and at 10 baht a bottle it does the job).

We arrived at the port in time however the ferry departed two hours later than scheduled. It was overbooked and plastic kids chairs were brought out to accommodate the passengers that weren’t sitting on the floor.

This was the premium ferry. Which got me thinking about how many life jackets there were given the 15% excess of passengers. The water got choppy and storm clouds were on the horizon. Time for another calming benzo.

Blissful ignorance returned and another self-help, life enhancing podcast on the ear phones. 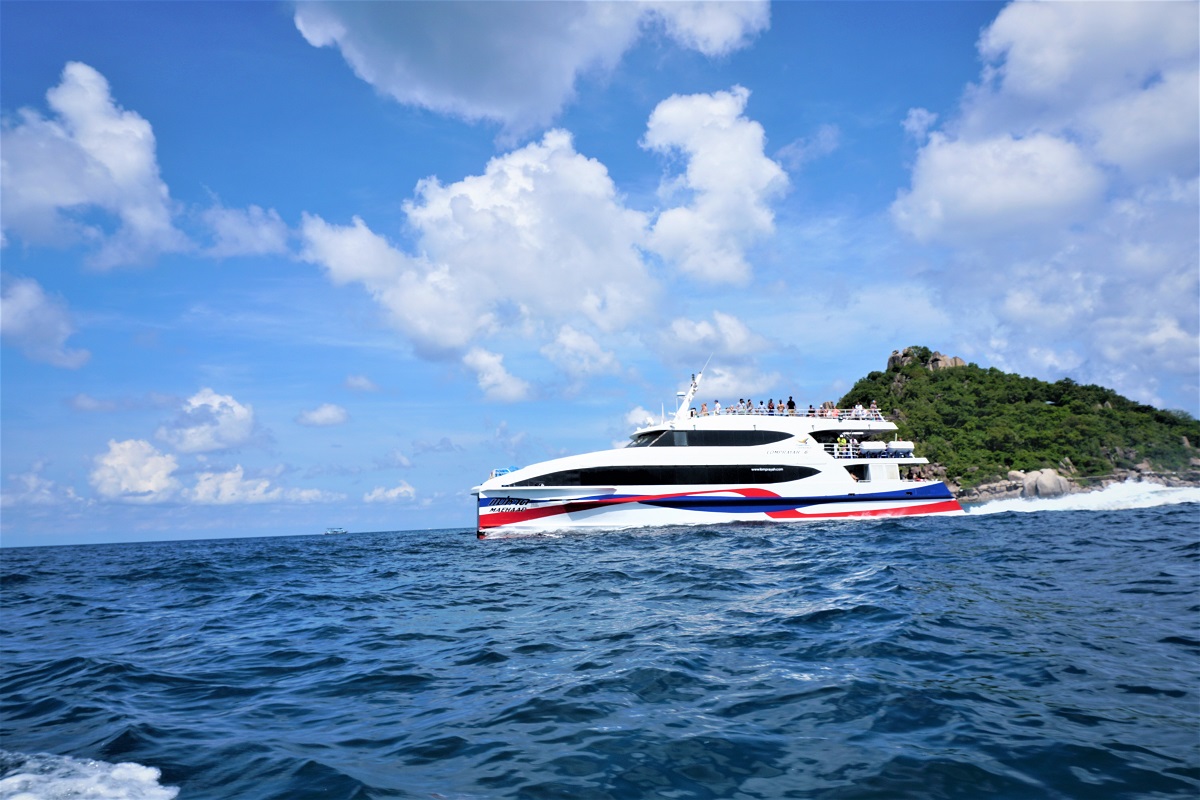 Ferry to the Island

We safely reached our destination. It must have been due to all the amulets and holy charms our captain brandished around his neck. Buddhism is starting to make more sense to me. As are people who have spent their lives on anti-psychotics.

In all honesty it was a slightly underwhelming arrival to the island.  Busy, bustling, touts, children trying to sell you stuff and a doner kebab stand next to a seven eleven. Not quite Alex Garland’s perception of the beach.

This was the Khao San part of the island if I could call it that. Littered with dive shops which seems to be the main draw to the island, everything else seem pretty much like any other Thai tourist hot spot from Pattaya to Phuket to Koh Phagnan.  Though a visibly lower presence of transgender prostitutes and catamites. It was however midday. 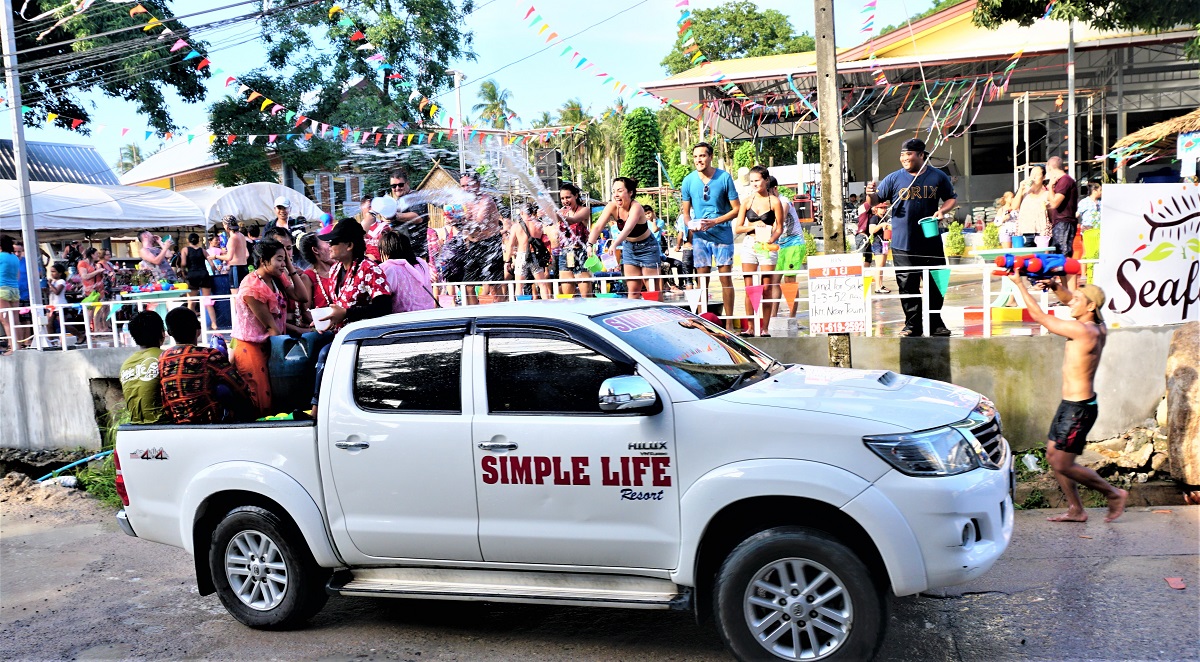 A long walk to a minivan that transported us to a resort a mere five minute walk away from the pier we arrived on.

The hotel was a fairly decent seaside resort for the price. A four star rating but these days I am beginning to question the validity of the stars and how they are allocated.

Great location on the beach but something more suited to Chinese package holiday tourists. Those that have never left the main land, smoke half a carton a day and consider a can of opened sardines to be sushi.

Rooms were massive, housekeeping great and since we avoided the Red Army the stay was exactly what we needed. 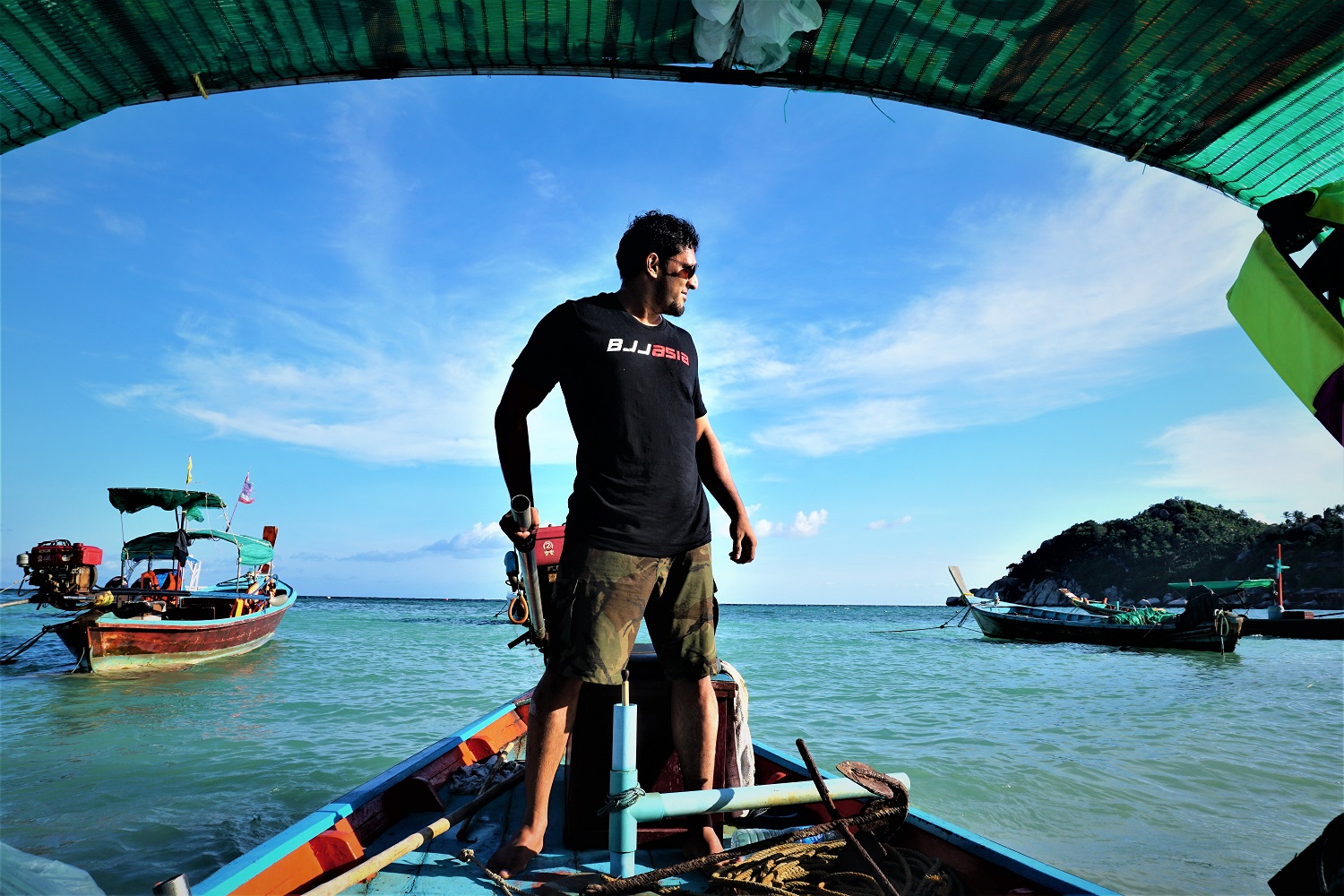 Commandeering a canoe with a lawn mower engine propeller

The first day on the island was the main Song Kran day. Given the scarcity of fresh water on an island and Thailand’s existing water shortage crisis, the government mandated only one day of water festivities.

This was enough to ensure we witnessed at least one A&E incident per hour. Copious amounts of alcohol, water cannons and motorcycle’s don’t make for happy endings. Having spent several years in Thailand I still don’t know what to make of this holiday.

The ethos and philosophy behind Song Kran is beautiful and transcendental yet its current manifestation leads it to be this sordid and debaucherously affair resulting in serious casualties and deaths. 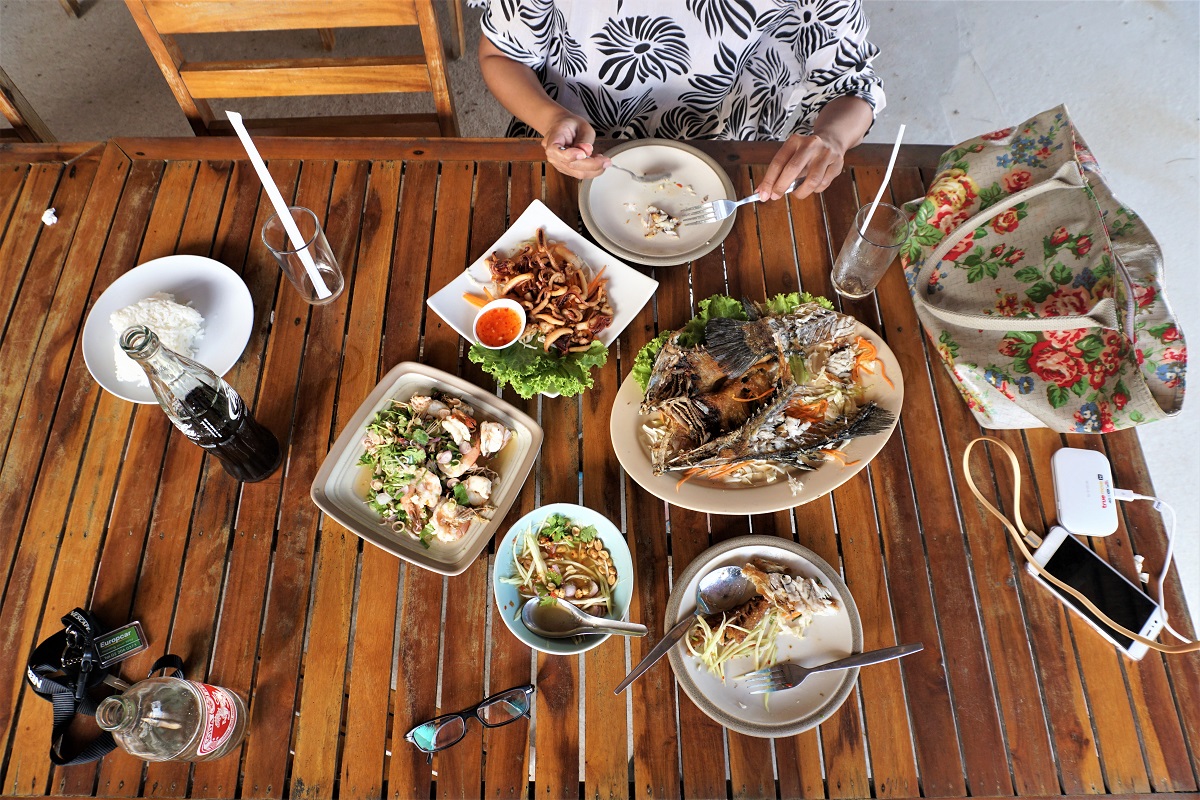 The gym was a brisk 10 minute walk away from the resort. All uphill dirt roads with drunken monkeys on mopeds hurtling through the area or English backpacker tourists as they are known in the common vernacular.

This was my first time at a 10th Planet gym. I had seen the videos, heard the incomprehensible names for the positions, partook in their herbal supplementation program but still  didn’t have a clue about what was going on when we hit the mats.

Ok, so I’ve trained fairly exclusively in the gi during my 5 years on the mats  which surprised me as to why i was tapping so much. The inclusion of heel hooks and reaping really changes the game. It took me a bit to figure out how to protect my legs and then things got interesting. 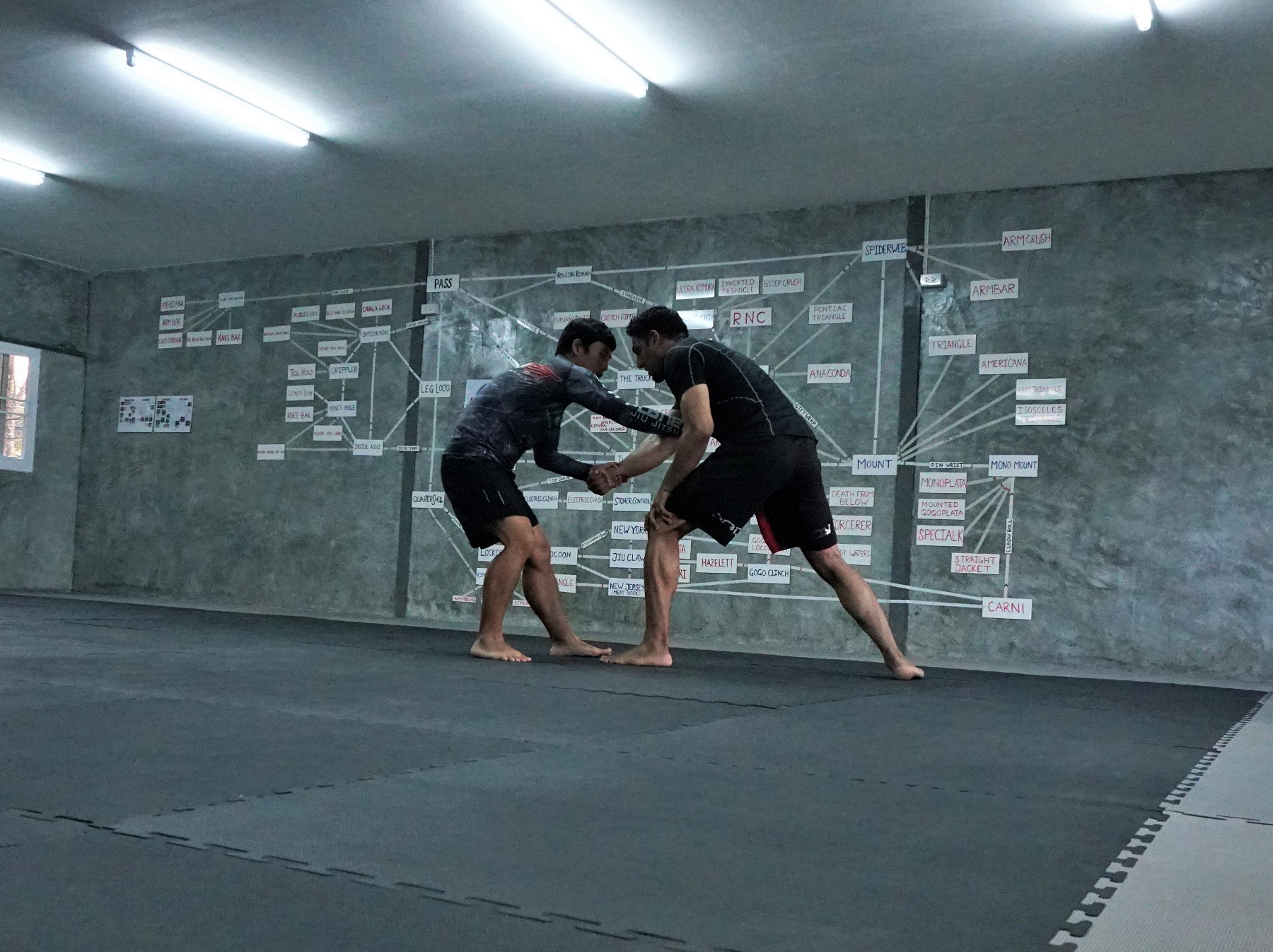 Monsoon gym has a typical Muay Thai feel to it. Centralised ring surrounding by punching bags etc. The defining factor here was the purpose built indoor weights and cardio room with air-conditioning in addition to a fully matted, dedicated grappling room above.

A sizable space and what a find! To have a facility like this on such an isolated and beautiful island is truly rare.

There appears to be a live-in training program as a few of the guys I spoke to moved there to exclusively live and train at the gym. Boracay is possibly the only other island where I trained BJJ in such proximity to the beach.

A huge bonus in my books. So, a great location in addition to modern and dedicated grappling facilities with an emphasis on hygiene.

This was going to be a mind fuck particularly after the mushroom shake consumed earlier that morning. Yes, the psilocybin version and this was not micro dosed. Au contraire. These guys were trying to treat PTSD.

Travel psyconaut guide aside, it was a scenic stroll to the gym.  There were only 4 guys training that evening most likely because of the holiday.  Two were beginners and the other guy was deceptively lethal and from the 10th Planet HQ in LA. 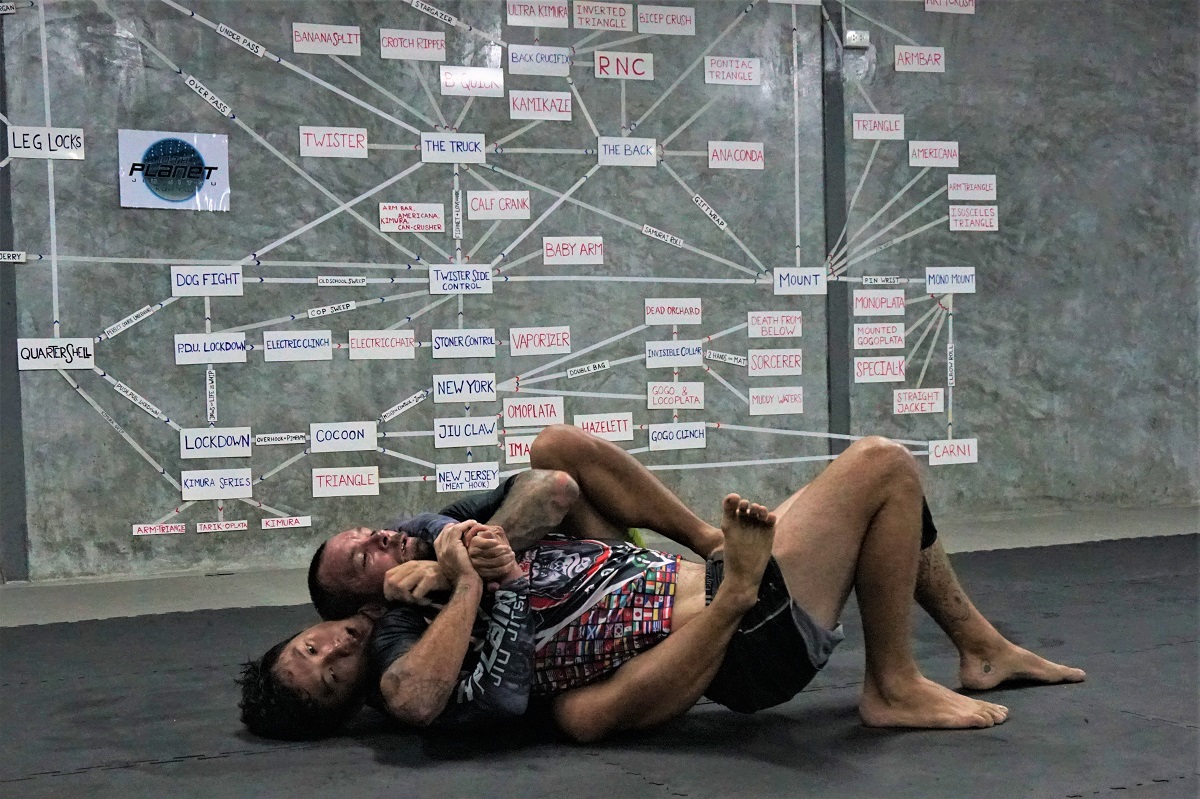 As is often the case I am the ranking heavyweight in the majority of the gyms I train at in Asia so I exercise extreme caution and restraint when training with new partners.

This sense of etiquette was not warranted here as the instructor and guest from LA both worked me over like a cheap Thai hooker at a shore leave gang bang. It was brutal, non-consensual and left me feeling violated.  I was now motivated to work on sharpening my nogi game.

The class itself was quite full and comprehensive. The warm up started with an array of wrestling take downs which was followed but a series of techniques starting from the feet. My favourite of which was the Sakuraba kimura.

The Peruvian necktie to twister took some fiddling before i got it and it now forms an integral part of my arsenal. Techniques were drilled until everyone executed it with a fair degree of competency which was then followed by 5 back to back 6 minute rounds.

The humidity and tropical climate did not make for easy rolling. Lubed up oil wrestling was what it felt like though extremely fun. The entire session ran from 6pm to around 9pm. These guys train for the love of the game and anyone who wanted to stay longer to practice,  roll or learn was welcomed to.

All in all this was a great jits trip. Great instruction, modern facilities and just plain cool guys to roll with.

Thanks to instructor Luke White for the hospitality and i look forward to returning and i would highly recommend this to any travelling BJJ enthusiasts. 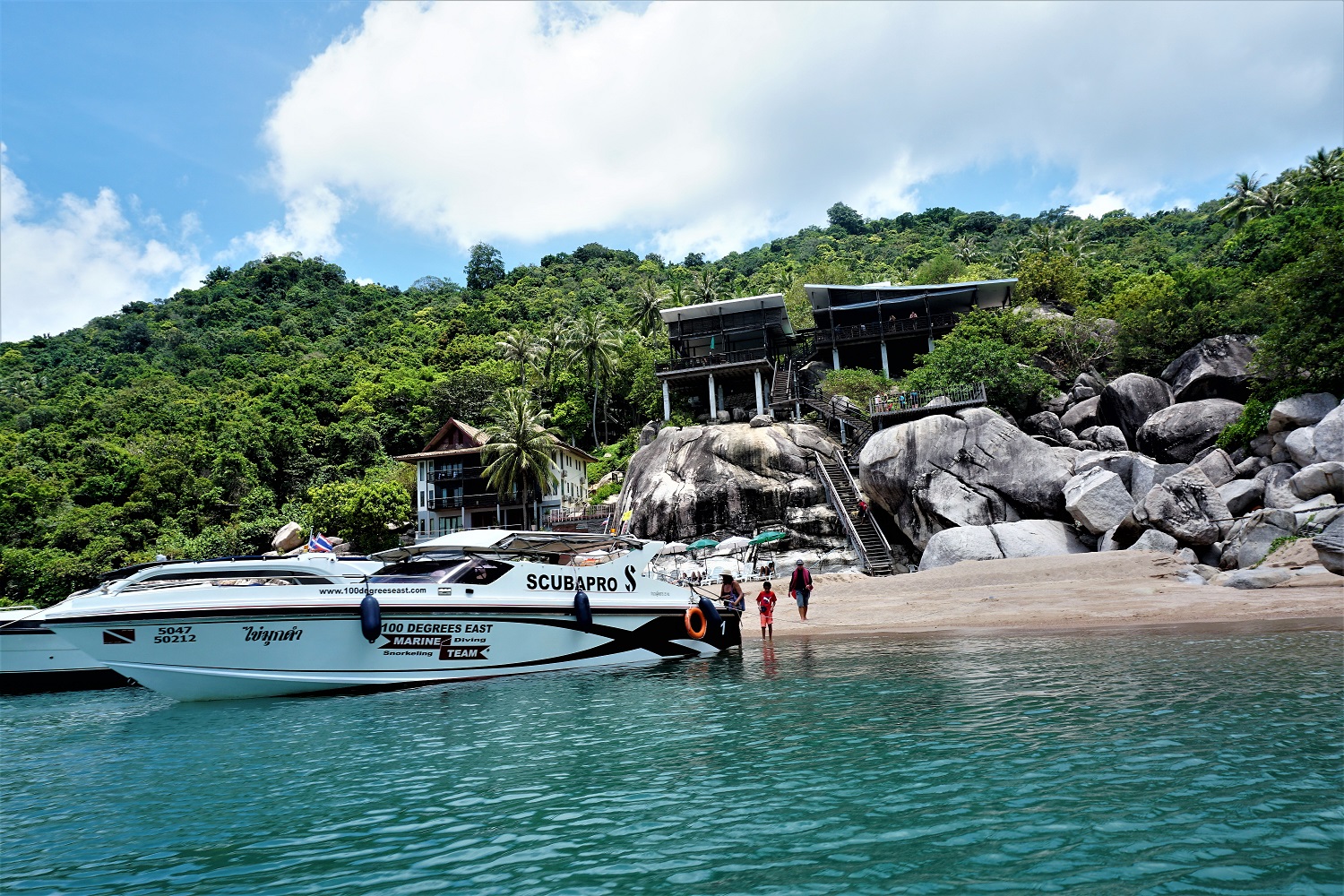 The rest of the trip was unexpectedly serene and magical to say the least.

We hired a longboat to ferry us around neighbouring islands and spent the days snorkelling in turquoise waters, swimming among an array of tropical sea life, lounging on secluding beaches and recharging the spirit and soul. 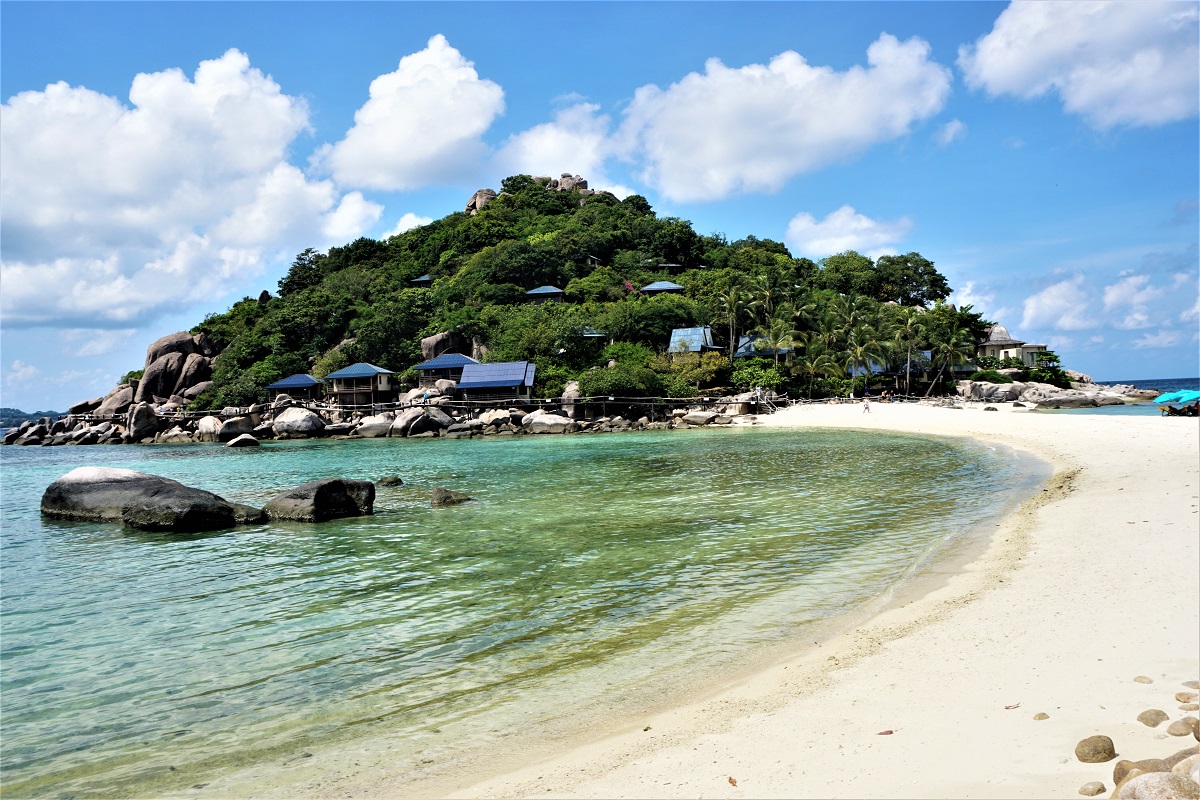