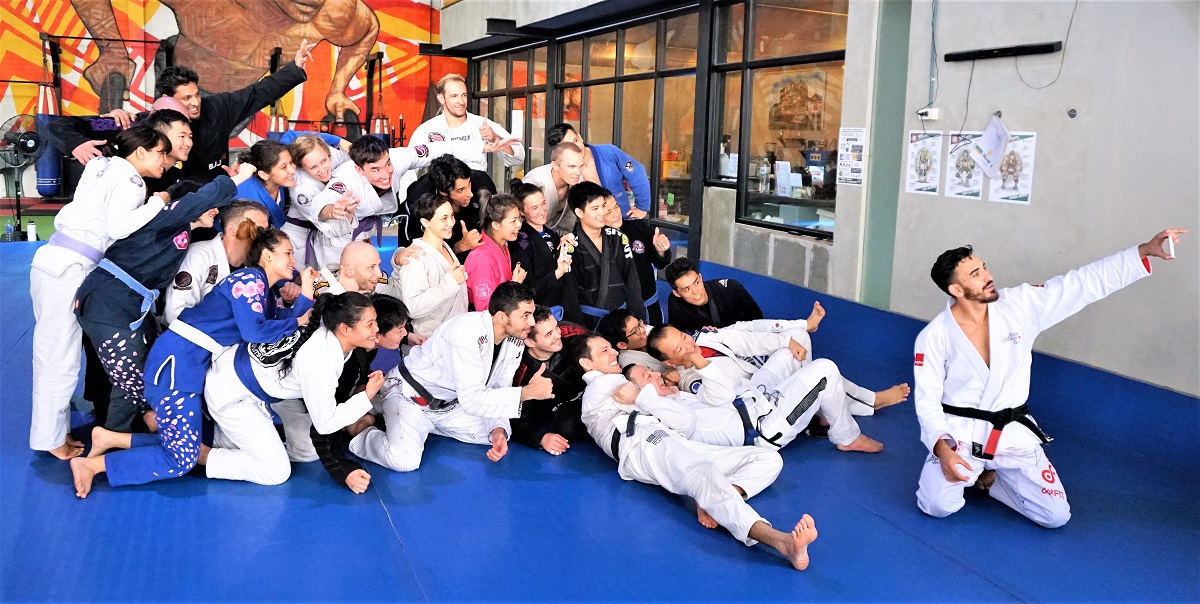 After an highly enlightening, informative and neck wrenching seminar, Edwin Najmi found time to sit down with Pavel Hacker and answer his questions.

In Pavel’s words “I have never seen a black belt approached by so many students for a photo, question or a chat. Some parts of the interview felt more like a group discussion than a media interview, with  Edwin sharing the story about letting his foot be broken by a foot lock, not tapping, winning the match and eventually the whole tournament.” 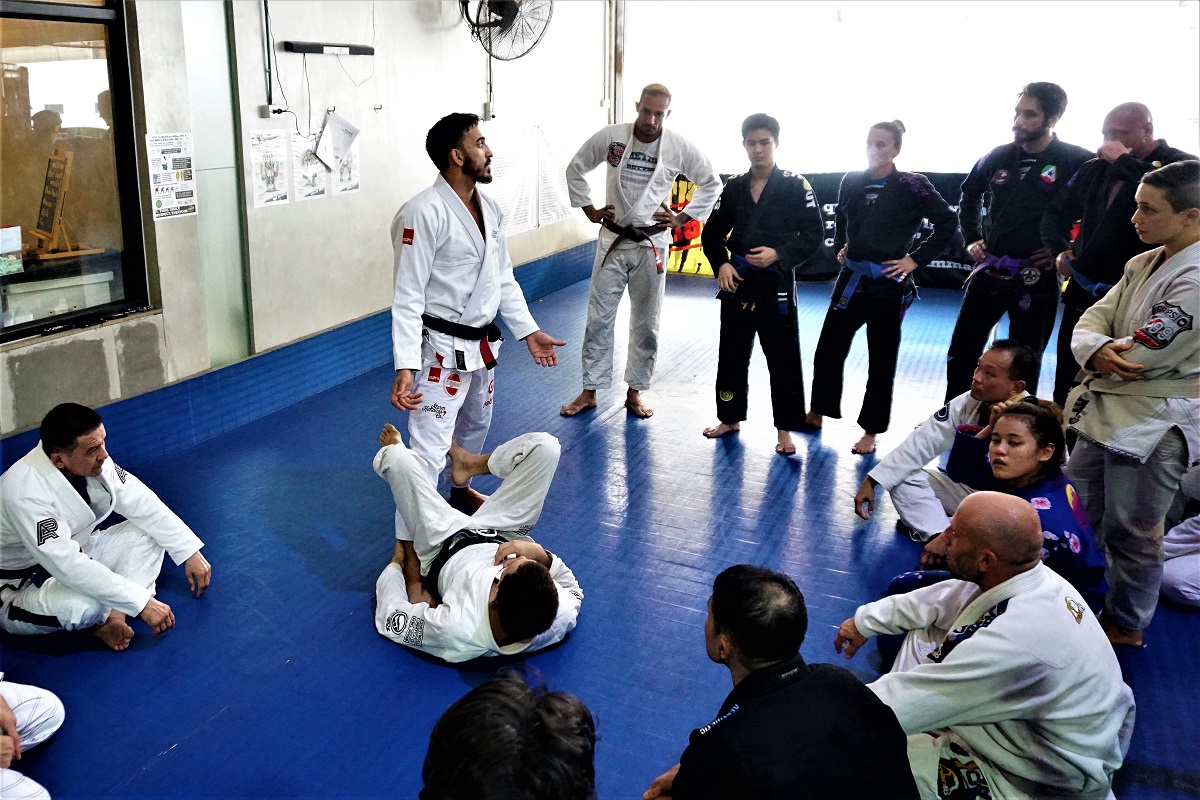 BJJASIA: There can’t be an interview with Edwin Najmi without asking about the flying triangle. I guess an important feature of pulling that move is confidence – you can see people landing on their kidneys because they most probably wanted to be like Edwin Najmi but didn’t really got into it 100 %. How did you discover that move?

EDWIN: Well, you need confidence for everything in life. It’s just confidence. The first time I got it by accident – I went for a collar drag and jumped, telling myself hey, this is cool! Then I switched into two collar grip, I did it in Pan Ams, pulled it couple more times, then in world’s final, became kind of famous for that…

BJJASIA: Being good is one thing, being good and entertaining for viewers another, right?

EDWIN:Not many people in jiu-jitsu realize that it is about your brand, your style, it helps with sponsors, winning the support of the crowd… people might think that I am crazy, trying to always kill the guy, but that’s my game. 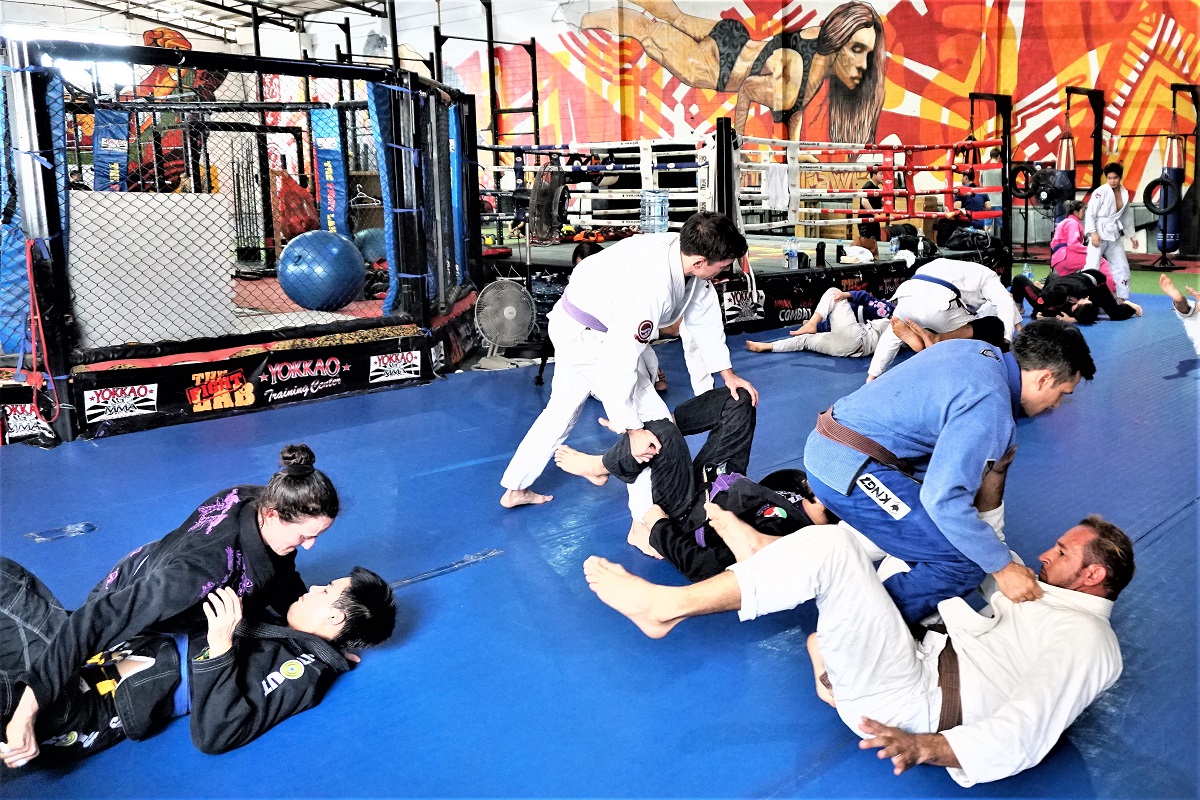 BJJASIA: Do you think that your origin, Armenian DNA, has some influence on you? That part of world is famous for one of the strongest people in the world.

EDWIN:Definitely. My DNA – Russian blood, Iranian blood from my father, that wrestling DNA, it’s definitely in me.The hardest part is to get a complete game. I have worked on my guard retention for several months in a previous period of my training, and now lately I have worked on my top game. When I got swapped I just stood up, I didn’t play guard – I acted like it was fire on the ground. It’s Romulo’s philosophy, to everyone in the academy once you pass their guard get into crazy scrambles, push, your face… that’s how you get better though. The most important part of the top game is the base: it’s not about passing guard, it’s about being solid, the base, the foundation. It gives your opponent a message right away. When I fought Lucas Lepri, who is a short, compact guy, he was like a rock – I was like “how would I move this guy!”. 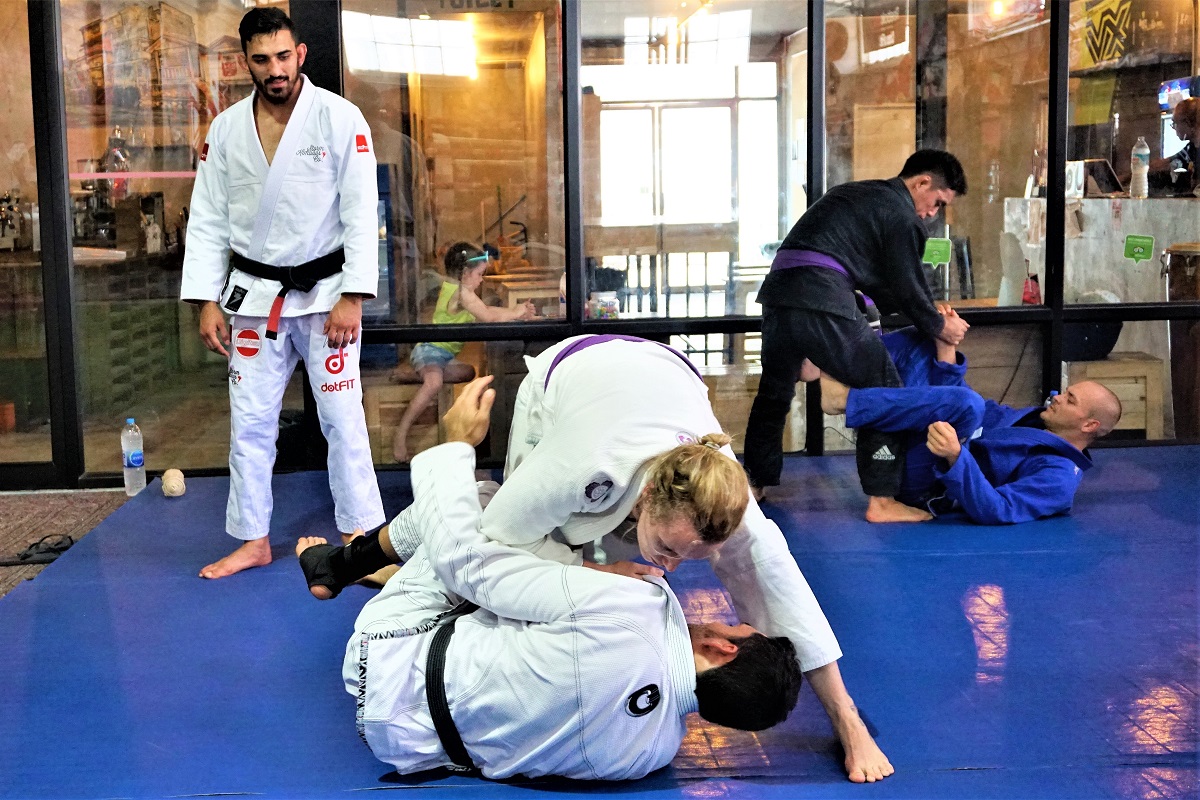 BJJASIA: You used to do a lot of weight lifting, stating it gives you a lot of strength. Do you still do that?

EDWIN:No. I switched to mobility training, isometric training, explosive workouts… I deadlifted 200 kilos, working with my friend, a powerlifting champion. Not anymore, I am down to around 80 kg max. You don’t need it. The top athletes in other sports don’t lift heave. Look at Jon Bones Jones, what it did to him. Important is mobility, functional strength, explosiveness. A guard pass attempt decides a match nowadays.

BJJASIA: The first place you have trained in was a gym of Gokor Chivichyan but, I hope you won’t get offended by this statement, you are basically a product of Romulo Barral. Once you switched to his school, you followed his guidance, in training, preparation, maybe in life in general. Would you agree?

EDWIN:Yeah! I listened to him all the way thorough, looked up to him. Of course, at the endo of the day, you must make your own decisions. He always tells me when I am messing up, he is there when I am winning and he is there when I lose. When others are padding you on your shoulders how good I am he gives me a handshake and that’s it, putting me back on the ground. Sometimes you get criticized, you maybe even hate the guy, but later on you realize that he was always right. 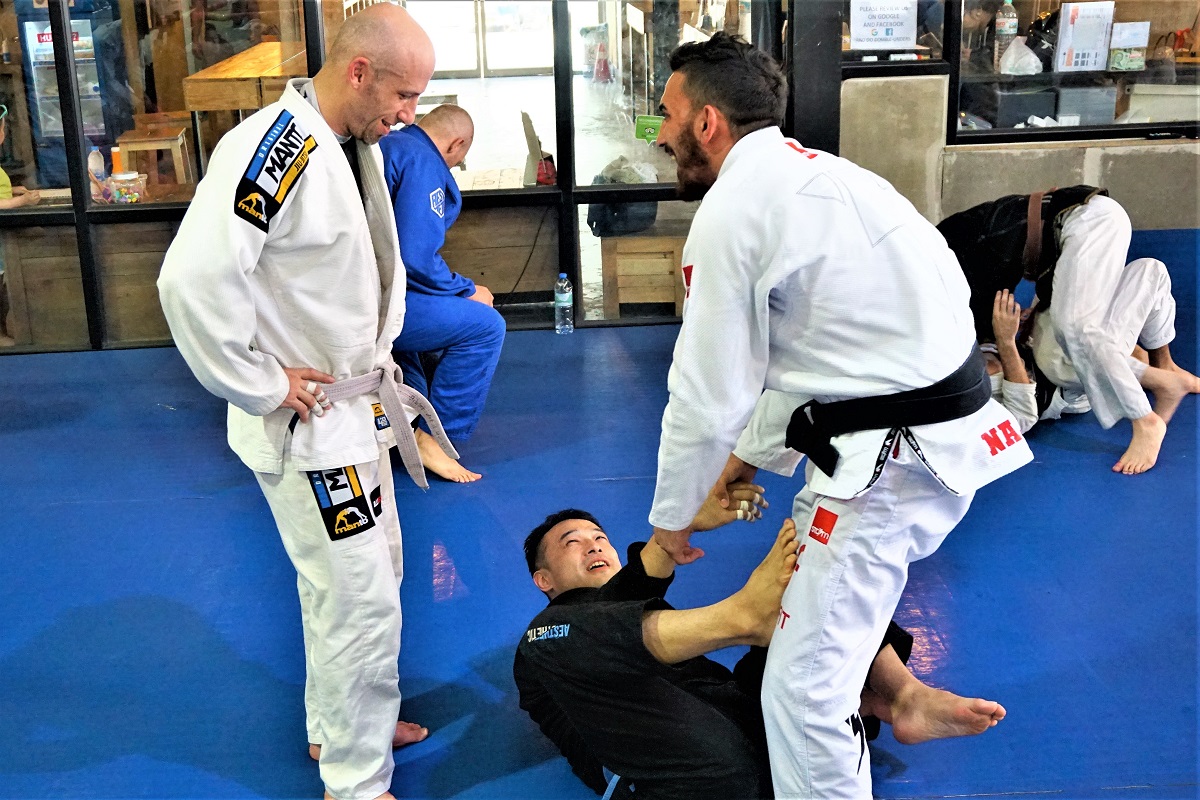 BJJASIA: Kit Dale says that he is where he is, receiving his black belt in four years, able to compete on very top level despite training on his own in Australia, thanks to his “new approach” that is not based on endless repetitions, muscle memory… you are kind of the opposite, what is your take on that?

EDWIN: I think it’s incomparable. I believe it’s good to have someone like that above you. Even if just to check on you.

BJJASIA: Do you roll with Romulo? Some people hesitate to go full on their sensei – a word you use while speaking about him.

EDWIN: Yeah we do and he smashes me. He knows my game too well. 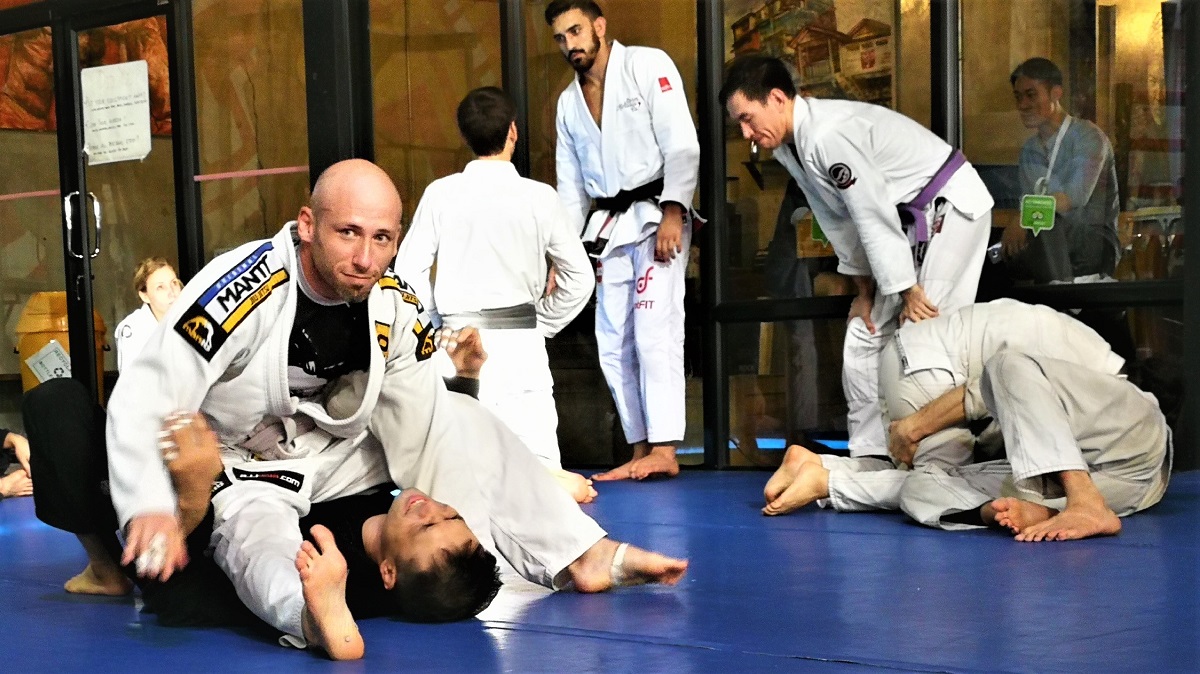 EDWIN: It’s part of the game, part of jiu jitsu: constant evolvement. Guys who don’t evolve are left behind. Those you won once and then you never heard of them again. I pick a technique or a concept, give a month to master that one, and move on. BJJ is hard to process, there are endless techniques, I would recommend everyone, not only top-level competitors, to use this pattern.

BJJASIA: You have mentioned today that you don’t have a “BJJ notebook”…

EDWIN: …yeah but I wish I was patient enough to do that though. I think it’s good. And I recommend everyone to have one. Also, I recommend everyone to compete. Makes you better, gives you experience, teaches you how to defend submission attempts in hard scenario. Gives you confidence. Even if you lose, you get the experience. You never win in a “normal” way, it’s always weird, always crazy, and that gives you the experience. Beating tough guy in a tough match gives you more than an easy submission.

BJJASIA: Every top athlete says that, however, there are people who hesitate to experience their first competition, or simply hate competing. Is there some cure for this? Kind of like showing someone depressed the beauty of life – showing someone who hates competitions why to love them?

EDWIN: I am like Muhammad Ali, I hate training, but I love competing. I truly believe you have to born as a competitor. But I also believe that it gives you the awesome opportunity to bring back that childhood dream of being an athlete and winning. You have that opportunity to have that feeling! There are weight categories, level categories, age categories, it’s as fair as it can be. If there is only 1 % chance you will enjoy it, give it a go. Losing 25:0 and winning changes you. Even on top level it’s so cool how friendly we are in our sport, I am sure that this is what you will soon feel after you start competing, and you are going to love it.

BJJASIA: On the other hand you have some gruesome stories from your tournament fights that rather sound like “don’t try this at home, kids”.

EDWIN: Yeah I think you mean how as a purple belt, I simply had to win the prize money. To pay for the ticket, for the trip, for my hope of professional career, just to let myself got caught early in the first match in a tight foot lock. I just looked away and felt how he breaks my foot… I won the tournament. It makes you mentally stronger. 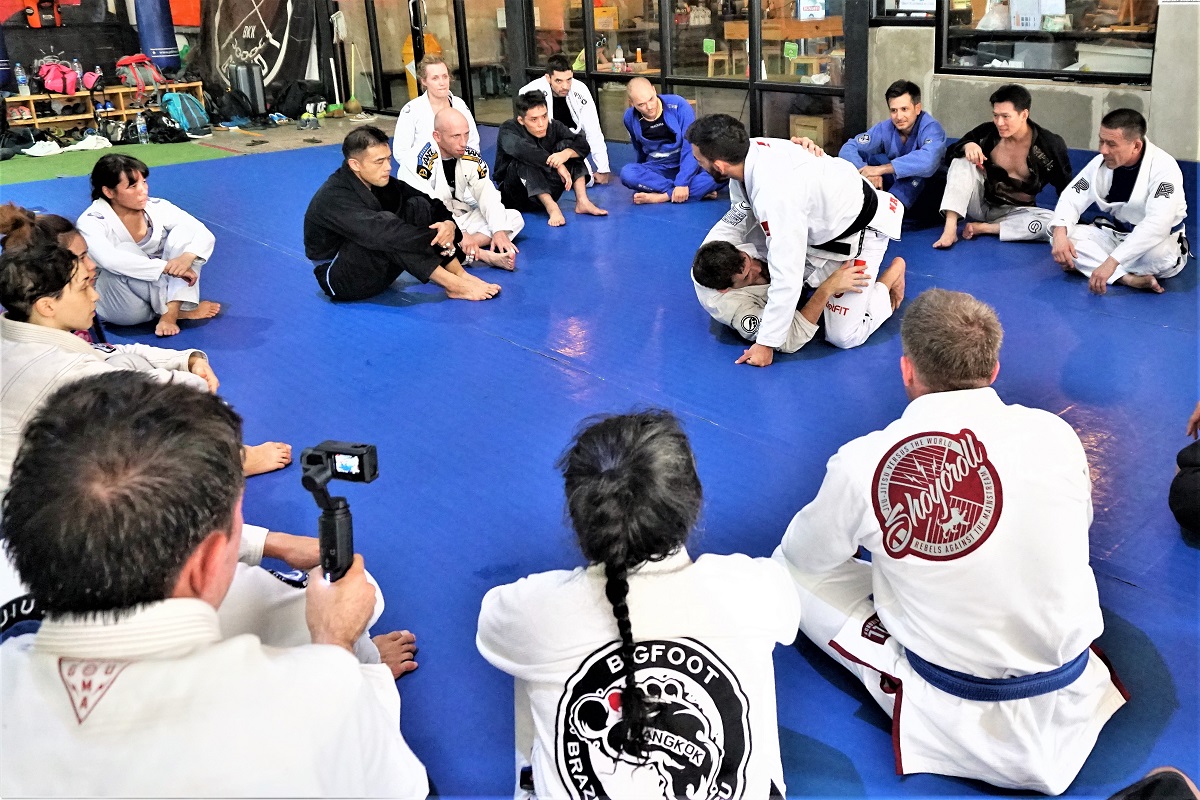 BJJASIA: The sour part of BJJ competitions are the referees. There was a lot of controversy over judging in favor of Brazilians in the last Worlds, especially in the Adam Wardziński case who simply should have got those 2 points. Do you think that having Romulo, a Brazilian star, in you corner, helps?

EDWIN: Nah, I don’t see any bad intention, I do see inconsistency though. Refs are part of the game and you have to deal with it. So that’s why I think Berkut rules are the best, as if the ref messes up, it’s only one round out of five, you have much more time to beat your opponent. Or submission-only tournaments.

BJJASIA: You will hear a lot that training BJJ simply demands scarifying something else: family, work, other hobbies… Do you feel like you had to sacrifice other things in your life?

EDWIN: Eventually. I am 24 and I already can’t train as much as I used to: I train jiu-jitsu twice a day Monday Wednesday Friday, Tuesday Thursday only once per day, on Tuesday and Saturday I add mobility, conditioning. I can’t train as much as I did when I was a blue belt, which was three times a day every single day. I have heard that Buchecha trains only once per day now… Our bodies are just that beat. 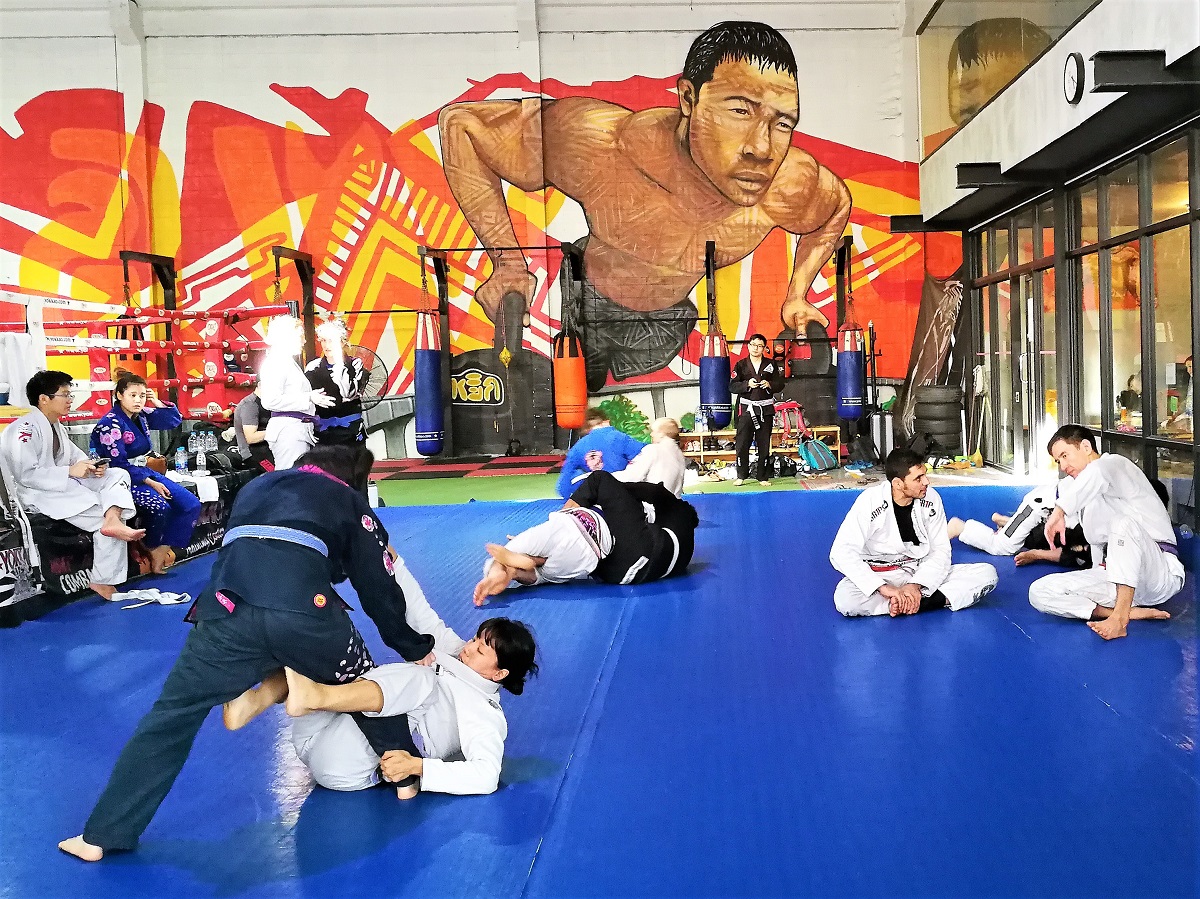 BJJASIA: What would you advise yourself if you came back in time. What would black belt Edwin advise white belt Edwin?

EDWIN: It’s a tough grind, it’s a painful journey. There is so many times I wanted to quit jiu-jitsu, so many times! But I kept going. Blue I got 2nd place in Worlds. Purple, I trained so hard, so hard! And I lost. At that point I almost quit. I didn’t train for almost 3 months. Than I came back, and I got disqualified! Thus, I really wanted to quit, I was over it. Romullo said give it one more chance, and I felt I am so deep I have to give it one more shot. So I came back, I can’t really say what was the reason, and I had the best six months on the mats.

BJJASIA: Last question: you have just arrived from Singapore, we are in Bangkok: your view on Asian BJJ scene?

EDWIN: Amazing! We had I think 3 black belts on the mats today, I think 6 in Singapore, the growth of the scene is so quick, and you are so friendly – the gyms training together, cooperating.

Thanks a lot Edwin! 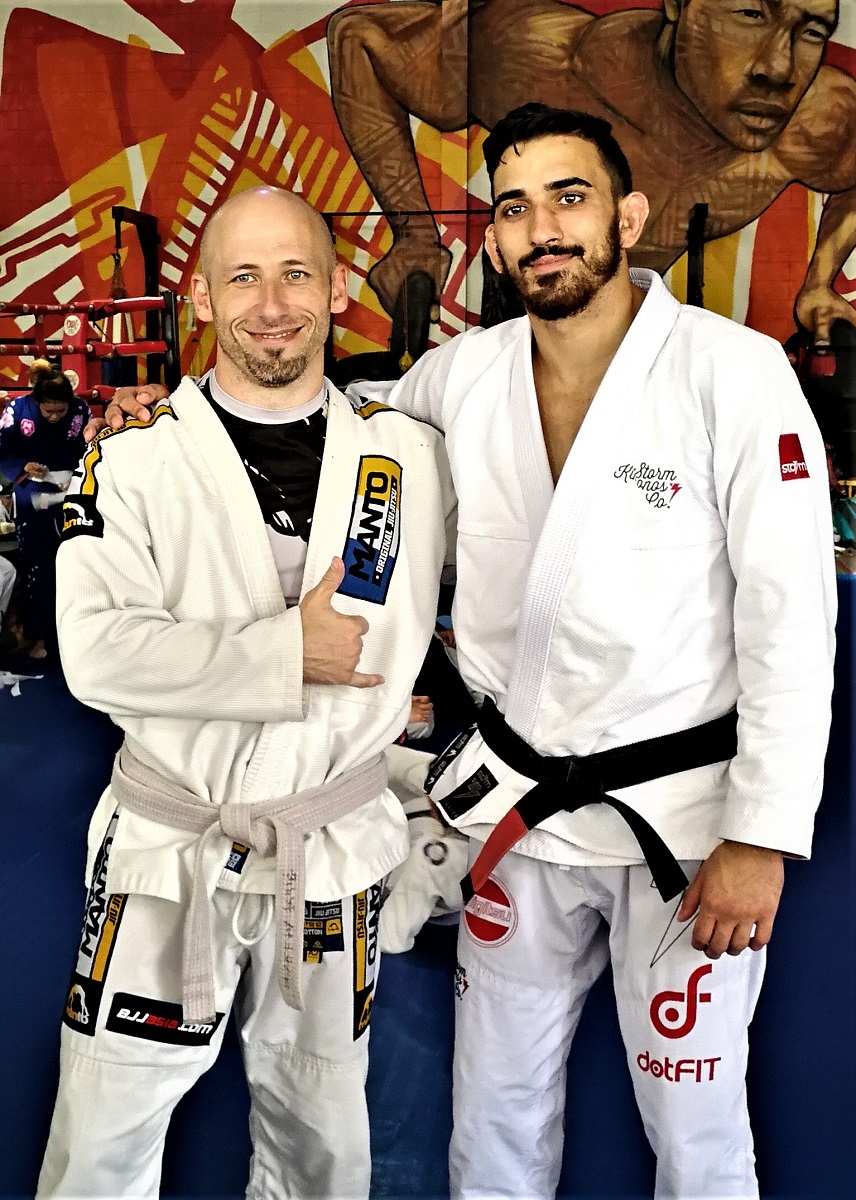