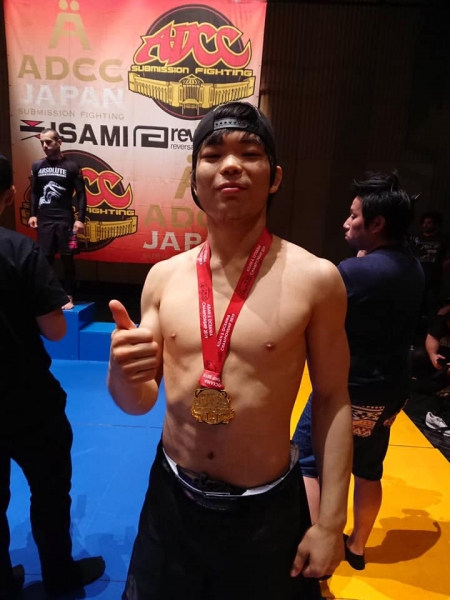 Kenta Iwamoto, (born February 13th, 1997) is a Japanese competitor who won the -66kg ADCC Asian & Oceana Trials as a purple belt in May of 2019 and would go on to compete at the 2019 ADCC in Anaheim, California. Though he would lose to Paulo Miyao at the event, his submission orientated grappling style has given him much deserved buzz within the community as an up and coming grappler. Most recently, during the Coronavirus pandemic Iwamoto has been active in grappling tournaments in Japan. Most recently besting the legendary Masakazu Imanari in the Main Event of ‘Battle Hazard 8’ November 2020. We caught up with Kenta to interview him on his recent victory and what the future holds for this young grappling star in the making. 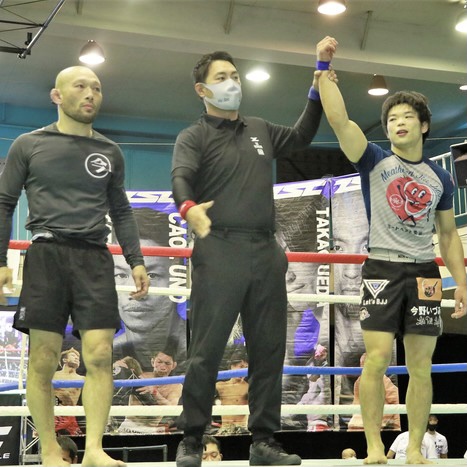 BJJASIA: Firstly, congratulations on your win at ‘Battle Hazard’. What is your impression on the victory?

IWAMOTO: Imanari-san has been grappling long before I started; even now he is called for international super fights and competitions so he is an internationally recognised competitor. I was very happy to get a win over a person of note like Imanari-san. Above all, the rule set also made it clear that no matter how much you pressured your opponent, it’s meaningless without a submission. So I felt there was weight to my win in being able to get the finish within the regulation time. 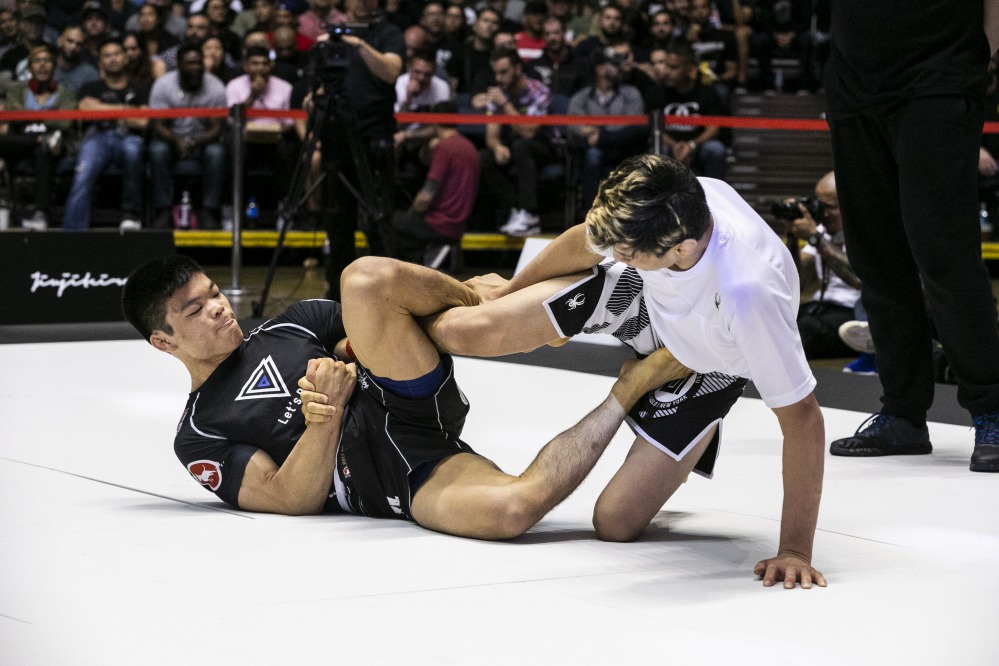 BJJASIA: In terms of submission grappling what rule-set do you favour?

IWAMOTO: No time limit submission only or a rule-set with negative points given when pulling guard. BJJASIA: What made you start Jiu-jitsu? IWAMOTO: I started training at the Judo club in Junior High School. After moving into High School, I continued with Judo as my after school activities (Known in Japan as ‘bukatsu’). However, the number of members was quite small and in the end I was the only member left. Even so, the judo club I was in was free-spirited and I would sometimes study instructional tapes I brought with me. At that time, watching the Jiu-jitsu DVD’s made my ground game stronger and I decided to start Jiu-jitsu when I entered University. 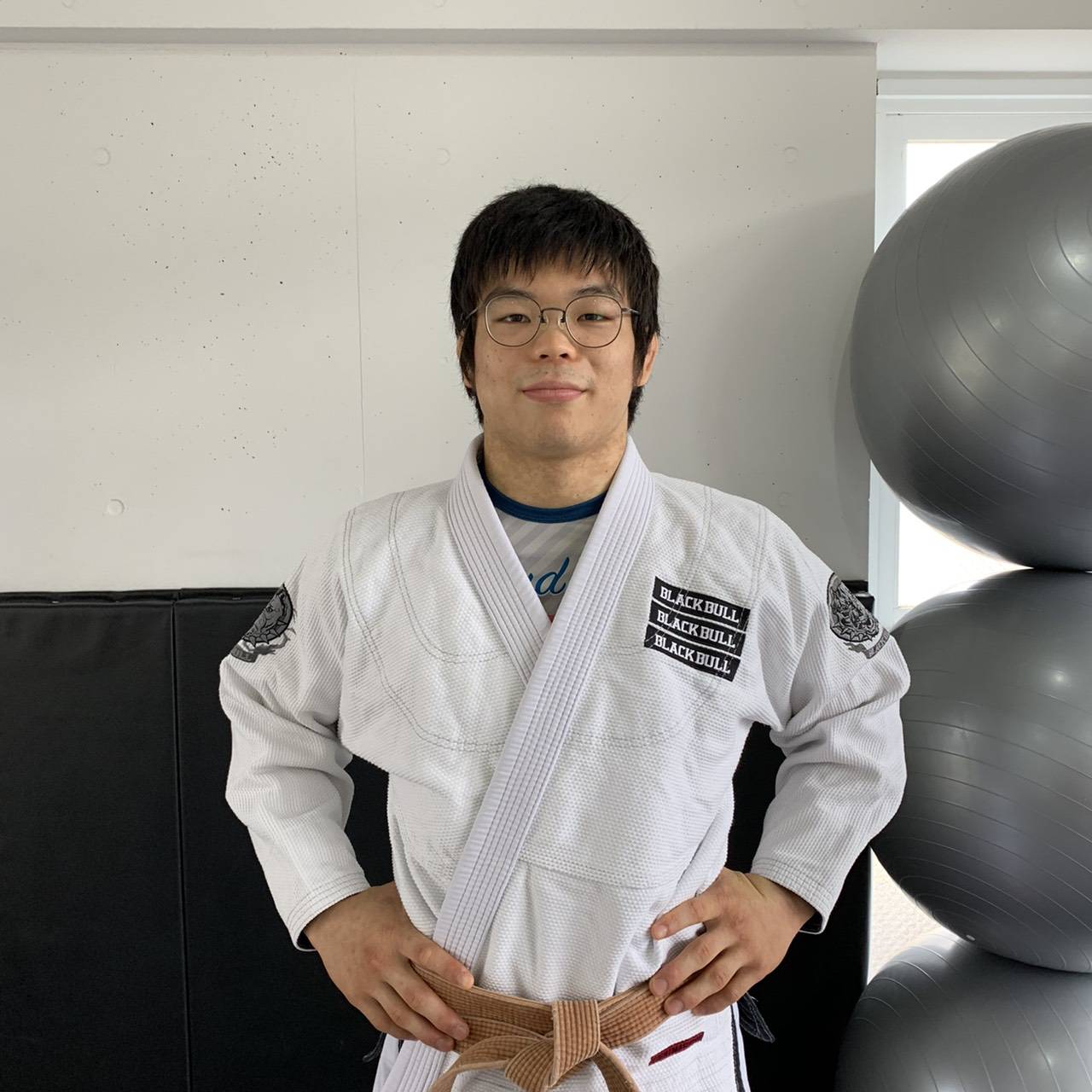 Prior to his fall to the darkside

BJJASIA: What was your first impression when you started Jiu-jitsu?

IWAMOTO: I was rolling all over place and thought it was a lot of fun. BJJASIA: Once you started University and Jiu-jitsu, at what point did you see Jiu-jitsu as a viable path to pursue full time? IWAMOTO: I was putting off job hunting for no particular reason and there was no clear turning point, but during my first year into my master’s degree I started to think that I could actually make a living through private lessons, coaching and competition. 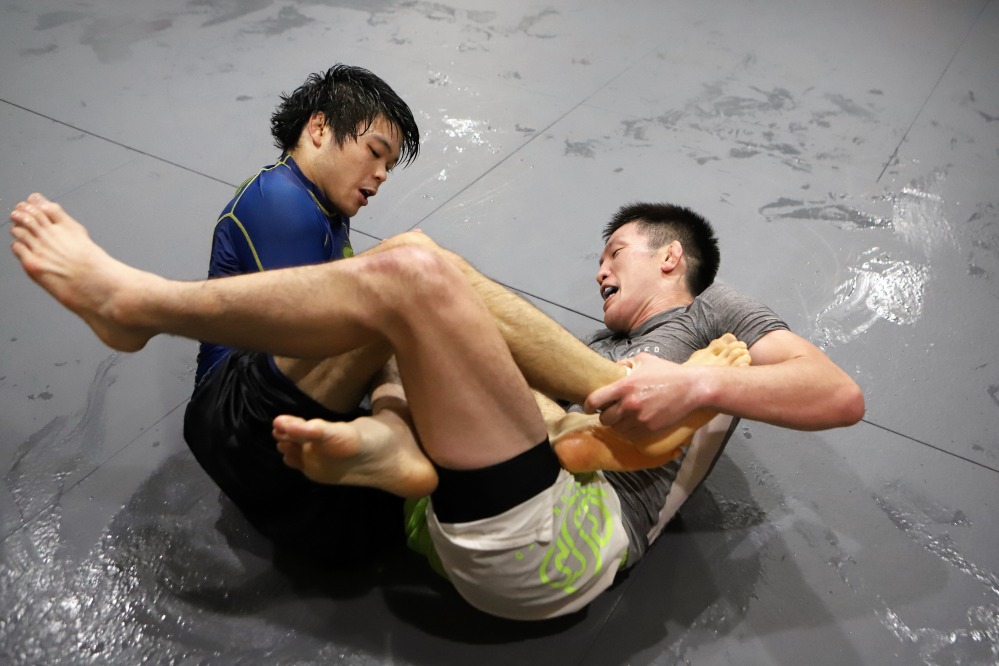 BJJASIA: Out of all the competitions you have entered so far what was the most memorable victory?

BJJJASIA: Why was this competition so memorable for you?

IWAMOTO: As this was the impetus for me to concentrate on grappling or ‘no-gi.’ Prior to the trials I focused more on training in the Gi, however 3 months before the trials I was able to exclusively focus on ‘no-gi’ grappling. I knew about ADCC before but grappling in Japan is by and large seen as an extension of training in the Gi. Therefore, you do not see people training exclusively in no-gi here. Due to the increase of international athletes competing exclusively in grappling, I felt that I could do the same. From a personal perspective, I found no-gi more enjoyable and wanted to go down the path of a no-gi athlete. At that time, I was convinced that the only way to continue such aspirations was to win the ADCC trails. 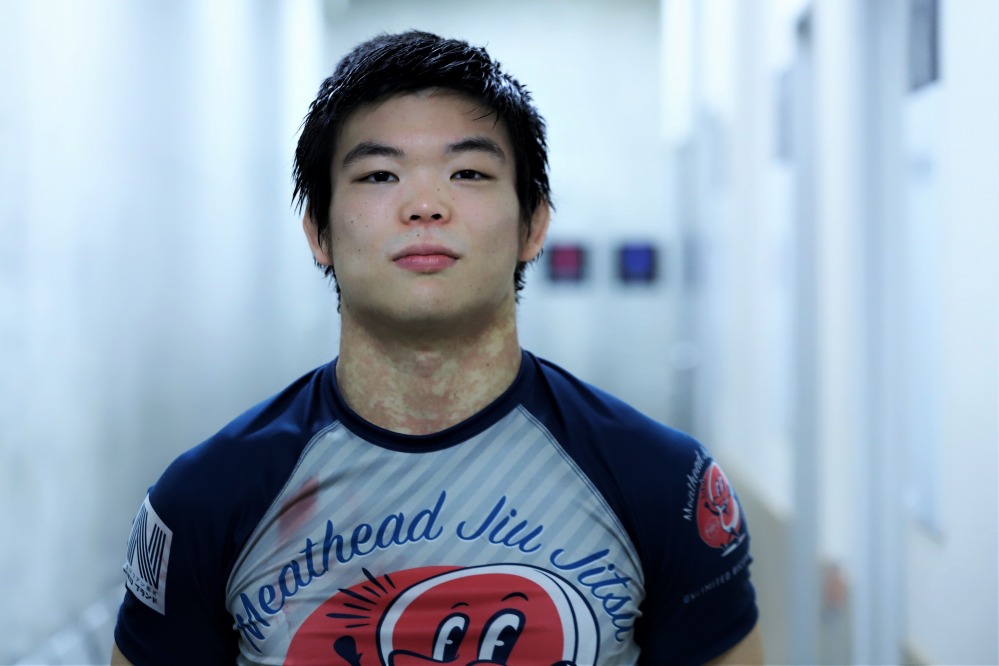 BJJASIA: What was your impression of ADCC 2019? How did you feel about your own performance?

IWAMOTO: They housed us at the Hilton in California so it was very luxurious and since meals were served as a buffet all the competitors would sit and eat together so it quite the experience. Being able to share dinner with the best grapplers in the world was inspirational. In terms of the event itself, there was a large group of spectators and I felt an event of this scale would only be possible at an ADCC. In terms of my performance, I lost. I was not happy with it but I felt I was able to compete at the best of my ability at that time. 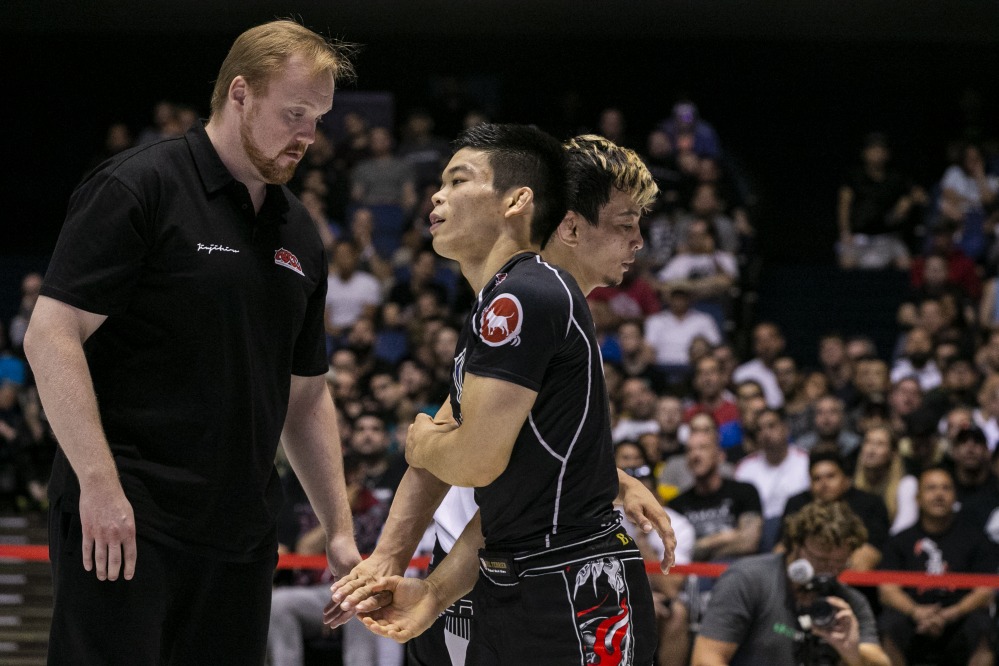 BJJASIA: During ADCC, even at the trials, which competitor left the biggest impression on you?

IWAMOTO: If would be difficult to whittle it down to one person in particular but if I had to choose it would be have to Lachlan Giles. The reason being that we went through the same ADCC trials together so I felt a sense of kinship going through the same event together. Actually, the day prior to the trials Lachlan was conducting a bodylock and heel hook seminar. I was cutting weight at the time and my throat was so dry but I attended the seminar anyway and it was great. I managed to apply what I had learned at the seminar the next day at the trials and was able to beat one of Lachlan’s students which I do feel bad about. All in all, I would say Lachlan Giles left the biggest impression on me.

BJJASIA: How does the training environment abroad differ from that of Japan?

IWAMOTO: Of course this depends on what overseas place it is, but from my own experience of grappling in foreign countries versus Japan, when I give my view the differences have neither a good or bad context at all as it is my own experience. After ADCC 2019 I visited Renzo Gracie NYC and 10th planet, most of the athletes I trained with train grappling exclusively. So, when training, you are consciously training in a ‘grappling only’ context. What I mean to say is, though we do train no-gi in Japan as well, most people also train in the Gi, so there is no practice environment where I purely train no-gi every day. At IGLOO Brazilian Jiu-Jitsu, to which I belong, we put a lot of effort into grappling, so we often train no-gi even in pro training. In my case, I also attend grappling practice with MMA fighters, so I can practice grappling every day. Since in MMA grappling fighters rarely pull guard, you can acquire techniques that you cannot otherwise acquire at other grappling gyms where guard pulling is part of the game. In this context, I also think that MMA grappling is now closer to a more “pure” form of grappling.

BJJASIA:  Why do you believe MMA grappling more ‘pure’? What would you define ‘pure’ grappling?

IWAMOTO: In the last year I have been sparring more in a MMA grappling format and during sparring sessions there is more of an exchange of offense and defence standing. When we see Jiu-jitsu grappling or ‘submission only’ matches, by and large you will see guard passing and guard play. Since the rules allow guard pulls the standing aspect of grappling is largely omitted from matches. However, in MMA grappling there is a necessity for the take down prior to passing or submissions therefore all aspects of grappling; wrestling, judo and Jiu-jitsu all become important. Therefore when we look at MMA grappling as a whole I feel that since it necessitates the use of all aspects of grappling, it could be argued as ‘purer.’ 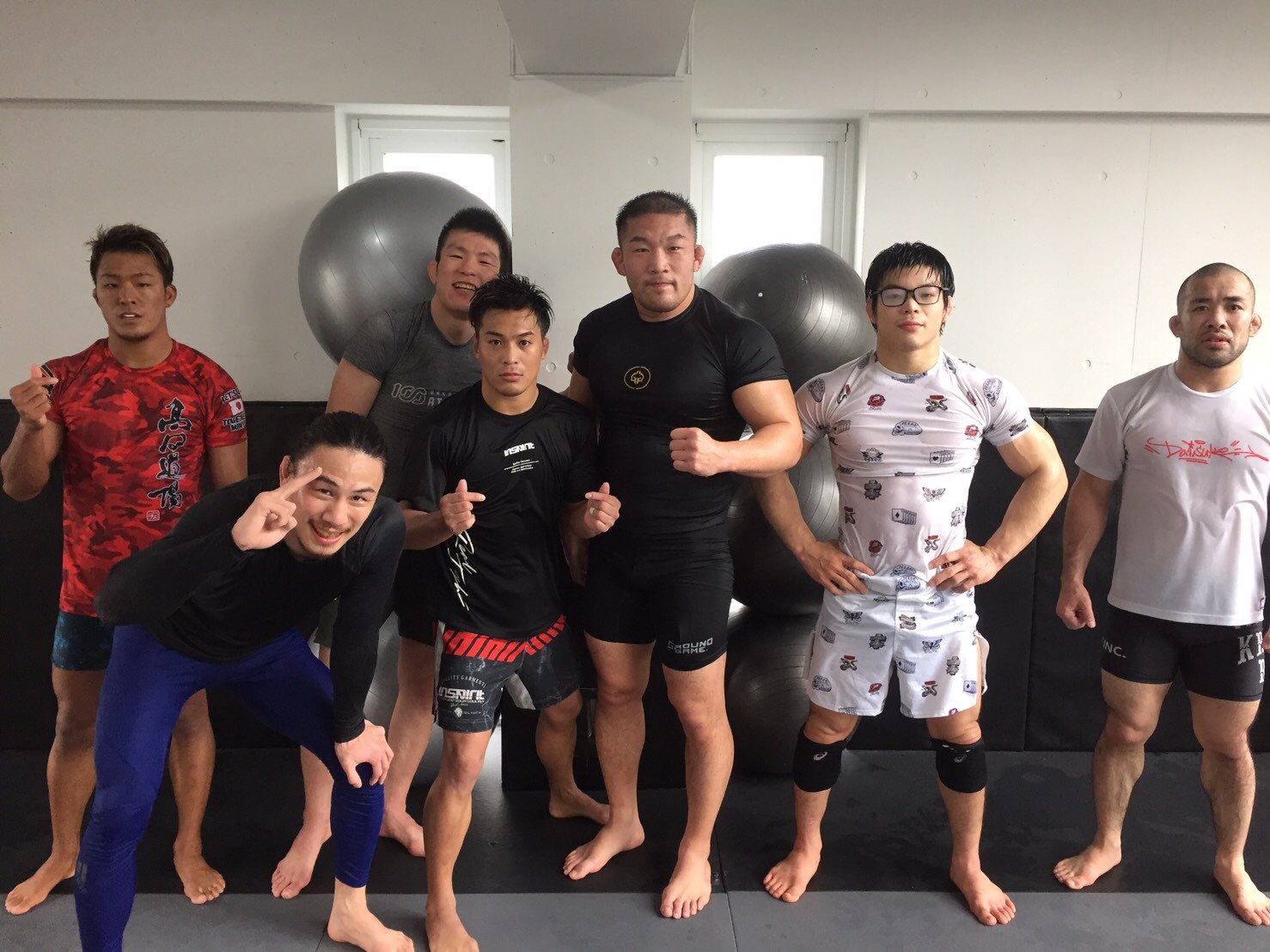 Hanging with some of the best Japanese MMA has to offer

BJJASIA: How do you train prior to a competition?

IWAMOTO: The training is by and large the same, but with sparring taking up most of the training session. After that, I am strategizing and doing some technique review with team mates and positional sparring.

BJJASIA: What are you thinking prior to your matches? What is your mentality?

IWAMOTO: I consciously try to relax and relieve tension prior to matches. In order to sense my opponents rhythm during the match I do my best to relax and release any tension I may have. 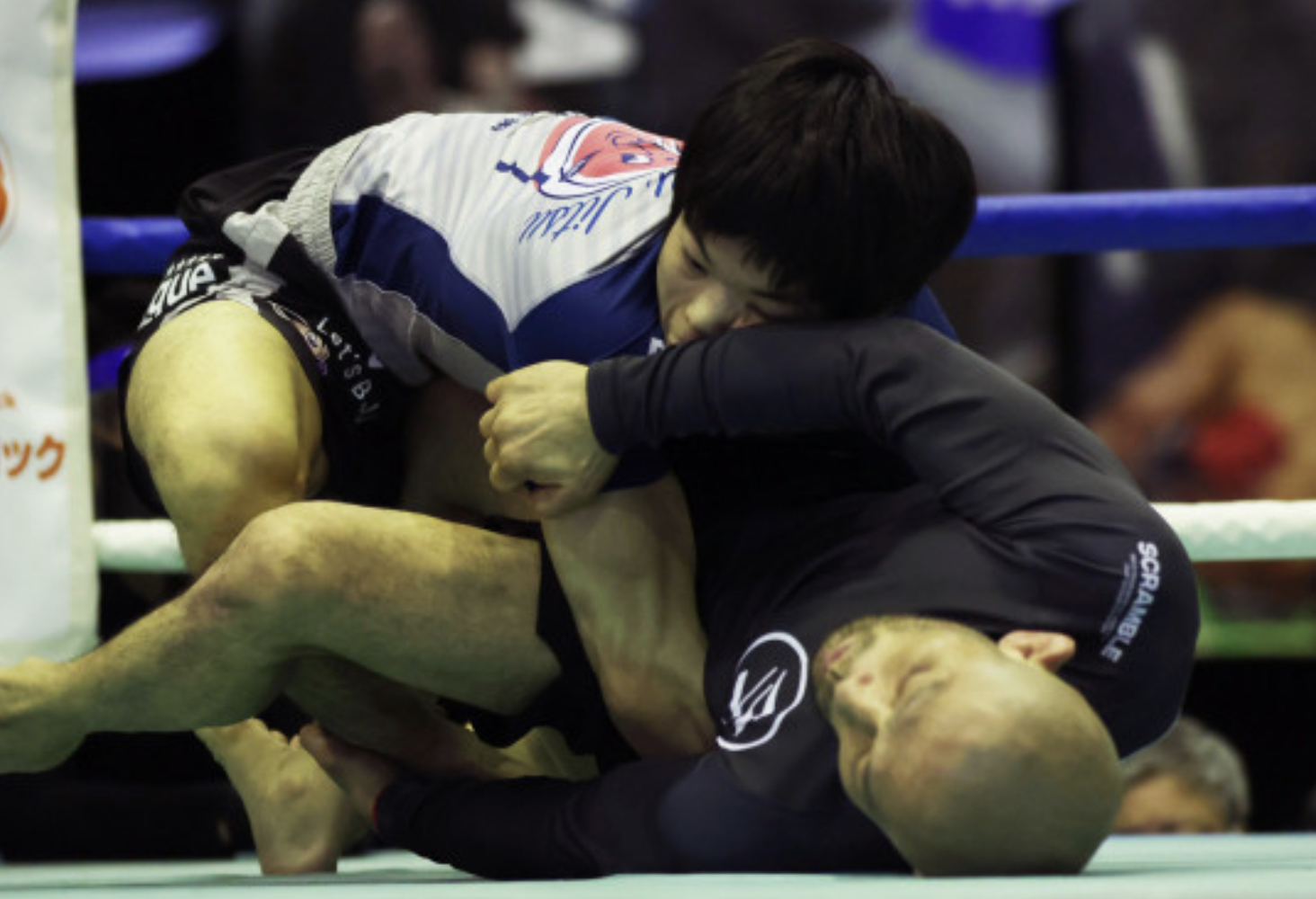 BJJASIA: Out of the places you have trained outside of Japan which gym left the biggest impression?

IWAMOTO: It would have to be Renzo Gracie Fight Academy in Brooklyn and the famous ‘Blue Basement’ at Renzo Gracie Academy, New York.

BJJASIA: Why did Renzo Gracie’s gyms leave such an impression on you? What specifically did you find special about these gyms?

IWAMOTO:  In New York, I was staying at the house of Daisuke Yamaji, who teaches at the Renzo Gracie Fight Academy and from there I went to both Renzo’s in Brooklyn and Manhattan. After class you would continue sparring, exchanging technical ideas and overall it was a place that nurtures growth. There you find people hungry to learn and grow as people and as competitors.

BJJASIA: What do you think of the current level of Jiu-jitsu in Japan looking at the current competitors in Japan?

IWAMOTO: I wouldn’t be able to comment on the level of Gi competitors in Japan, but if I was to evaluate the current level of no-gi in both ‘submission only’ and the IBJJF rule-set I would say the level is not that high. That being said, there are competitors that are at a high level here.

IWAMOTO: In Japan during the ‘lock-down’ in 2020 a lot of Jiu-jitsu competitors and MMA fighters took an interest in no-gi and as a result grappling grew in popularity. In terms of popularity, I think Japan and Kazakhstan. 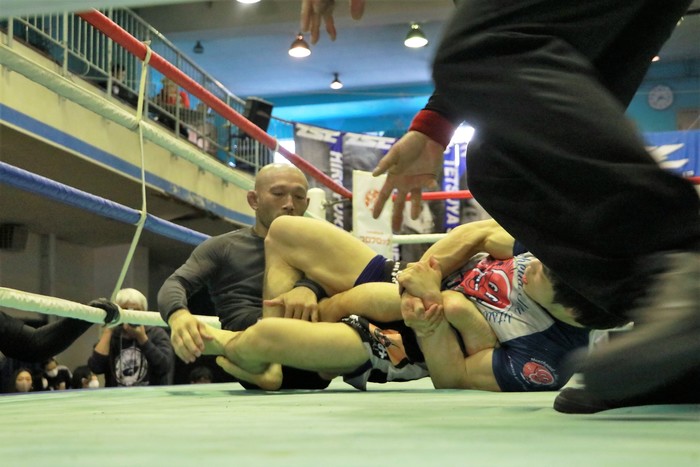 BJJASIA: From a personal standpoint, what do you think is necessary to make Jiu-jitsu more exciting in Japan?

IWAMOTO: I think it’s difficult to get more eyes on Jiu-jitsu as the current audience is almost exclusively those who are doing Jiu-Jitsu and their families.

BJJASIA: What are your current goals for the future?

IWAMOTO: To become better at grappling and to beat the best in the world.

IWAMOTO: I would like to thank all my team mates, friends and my current sponsors for their continued support. 29 Niku Brand, Lets BJJ, CBD Fx Japan, Igloo Brazilian Jiu-jitsu 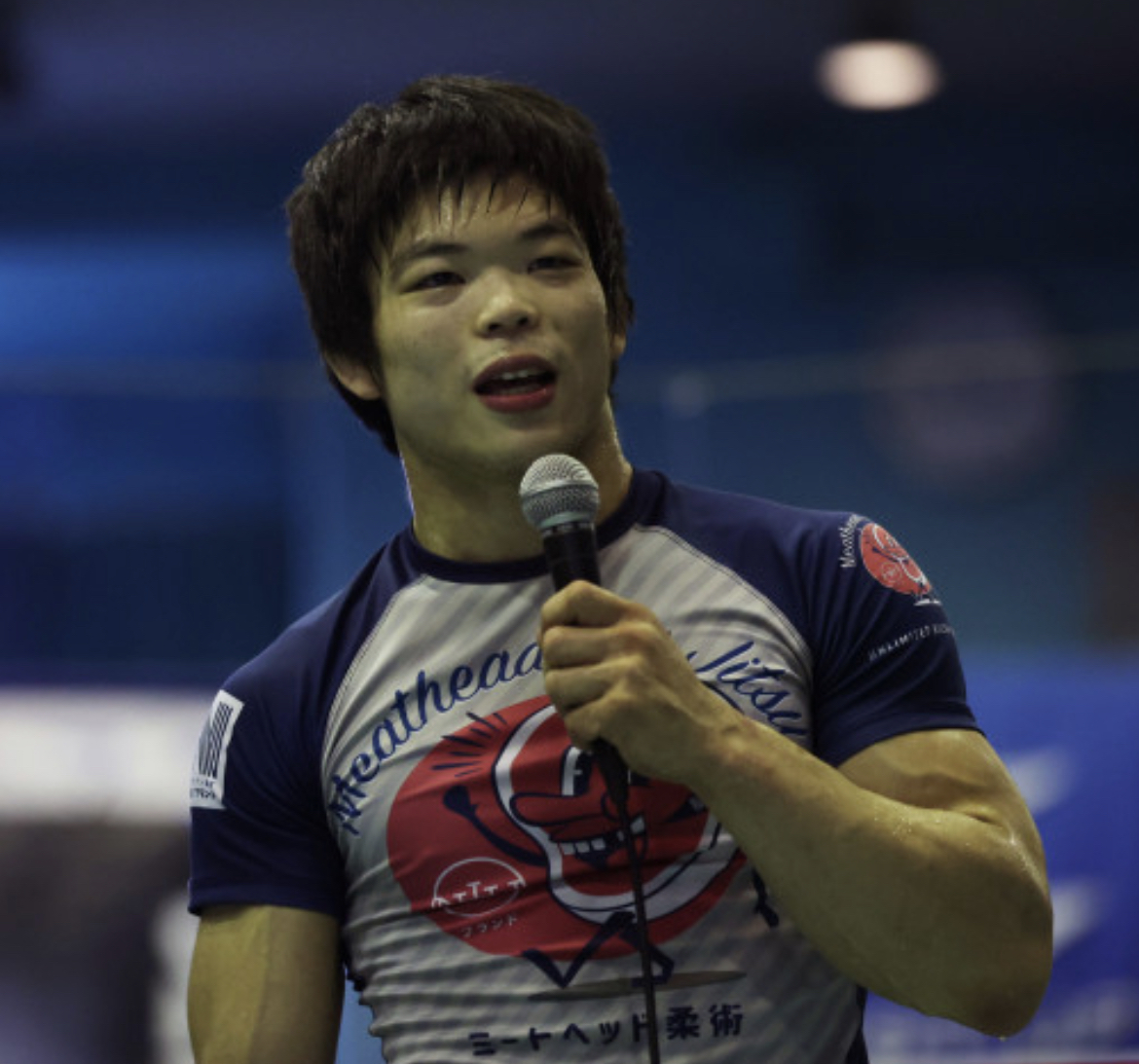 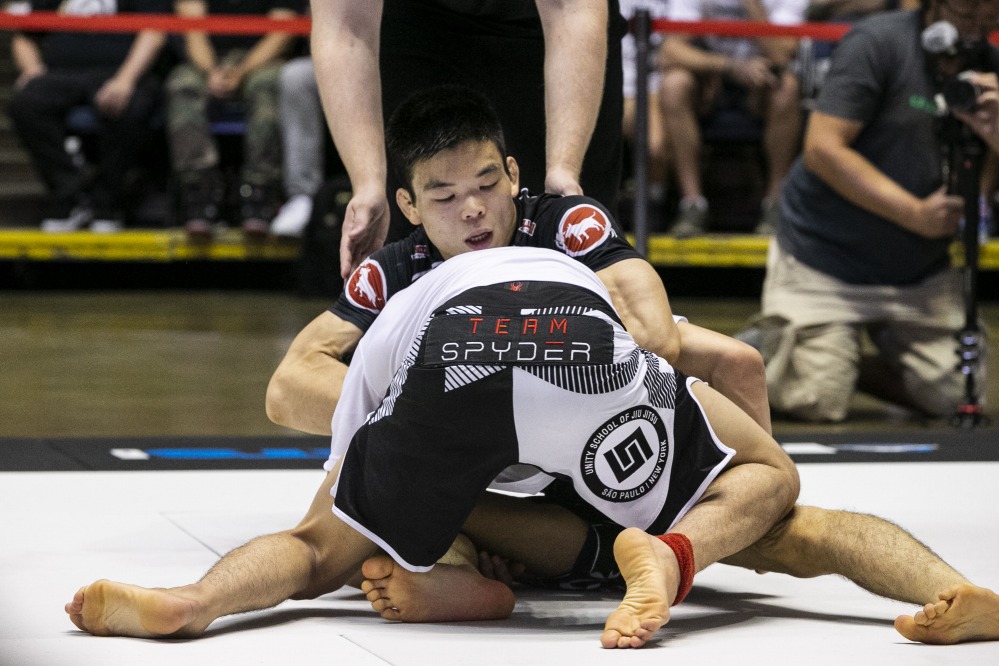 To oil check or not to oil check, that is the question 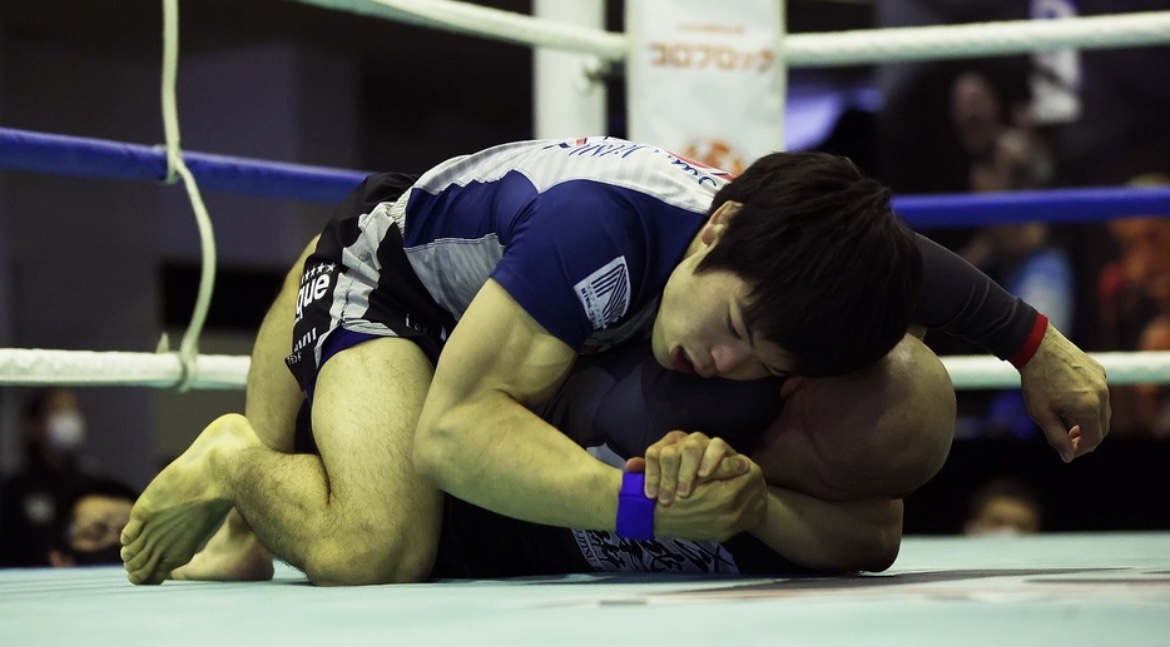 Rules of the Ring 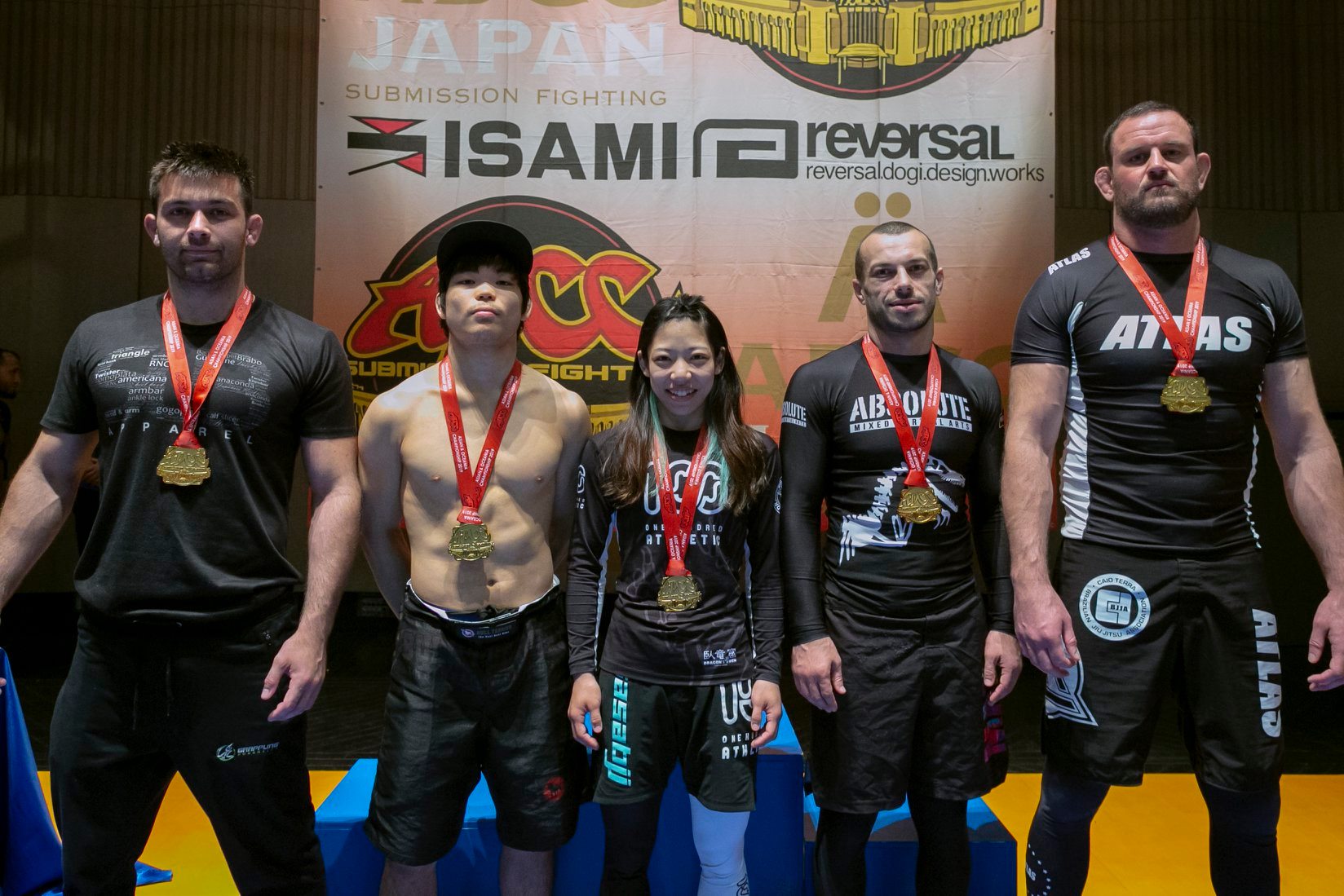 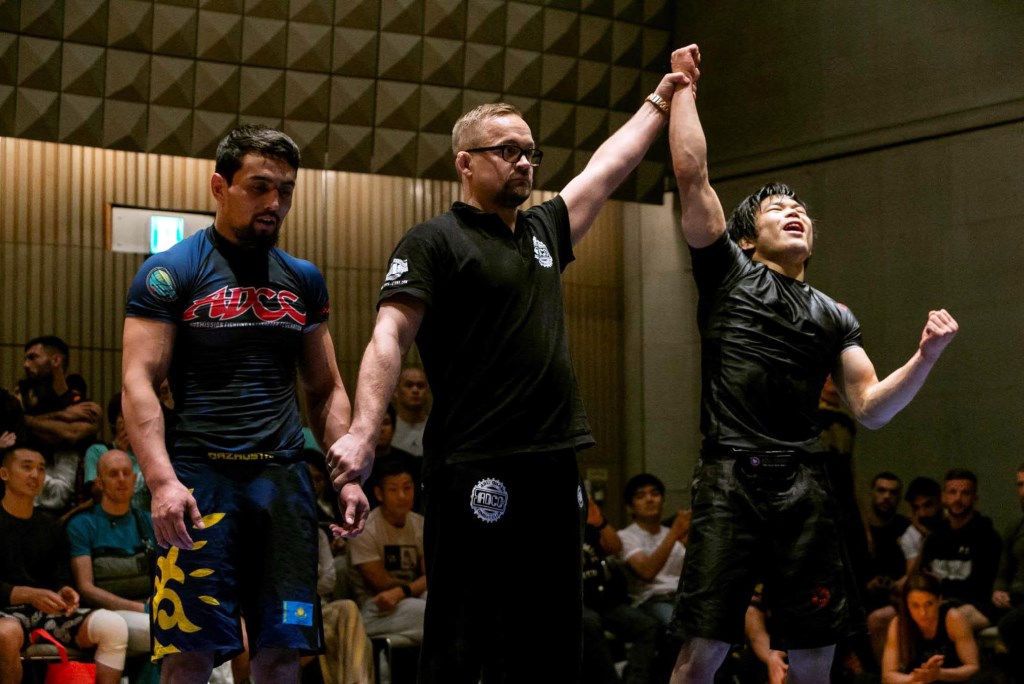 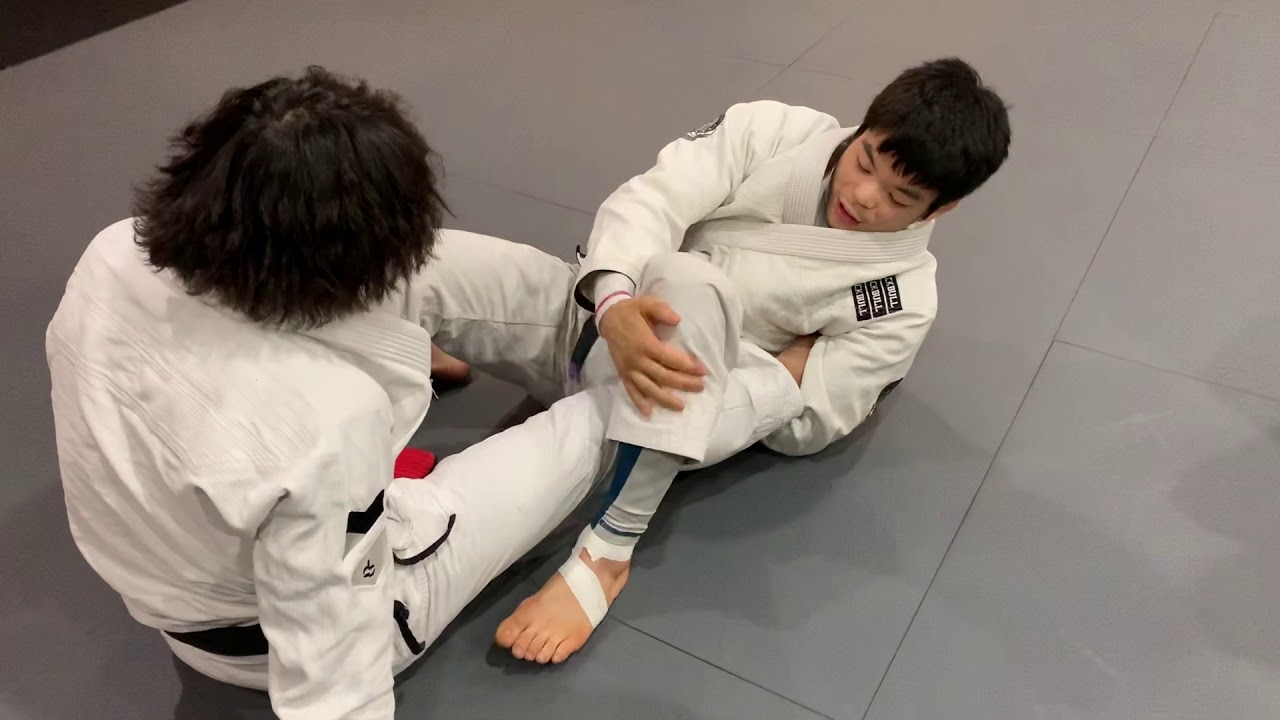 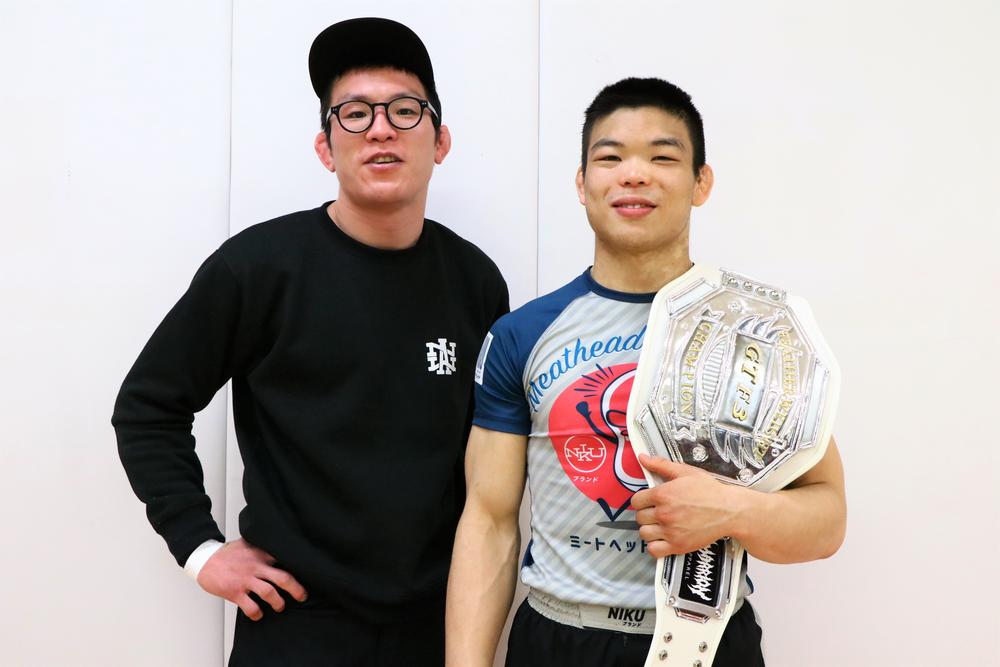 Mac is a former Businessman in the Japanese Construction Industry.
Hearing is calling, he left his former life behind him to bring Functional Fitness to Myanmar.
Now a Manager, he coaches both Trainers and Clients alike.
In his spare time he is the Head Instructor for BJJ Myanmar.