Beach, surfing, jits – these three images go perfectly well together. It is starting to be commonplace to have retreats that include these three elements in one weekend event.

Today, we’ll take you to the island of Bohol in the Philippines to speak with JA Uy and Ton Uy – brothers, owners and founders of Bohol Island Jiu Jitsu. Bohol is one of the Philippines’ 7000+ islands and is considered to be one of the most beautiful places for the perfect tropical get away. Blessed with pristine white sand beaches, lush forest, the “Chocolate Hills”, great local cuisine and the friendliest people on earth – Bohol should definitely be in your bucket list for your perfect BJJ holiday.

BJJASIA:  Thank you for joining us in this interview Jay and Ton. First up, I’d like to know about you – can you share with us your BJJ Journey – how you started and what got you to where you are right now.

JA: First off, Thank you also for having us for this interview. Well, i think my BJJ Journey started being inspired by the early UFC days. I frankly didn’t know what the difference back then was between MMA and BJJ. Around 2007, it was my 2nd year in College in CEBU and my brother Ton went to study in Manila. It was there that he got Introduced to Judo as his PE (Physical Education) in Ateneo (Author: one of the country’s biggest universities). Luckily for him his JUDO Instructor was Prof. Ali Sulit, back then I think he was a BJJ Purple belt under VPF. During the holidays when we would go home to Bohol my younger brother would do throws and submissions on me. Now, as the older more competitive brother I really had no choice but to seek where I could learn this in Cebu. Come 2008, it was at this time BJJ was at its infancy in Cebu and the internet wasn’t filled with social media and you couldn’t really search much on where to train at. Luckily for me, one day I was walking on the my college campus grounds wearing a UFC shirt and a random stranger approached me and asked if I wanted to learn BJJ, he gave me the details on where to find the gym and what time the classes were. I got there and thought it would be something like MMA, to my surprise they had Gis on and were rolling around on the floor. That was when I met my first coach, Norman Go*, he was a Blue Belt under DEFTAC-Gracie Barra back then. If it wasn’t for him explaining to me and convincing me that BJJ wasn’t gay and at least to try out the free class, I wouldn’t be here right now 12 years later having my own school, BOHOL ISLAND JIUJITSU.

(Author: Norman Go is the pioneer of BJJ in Central Philippines. One way or another, all of the academies in Cebu and Bohol are currently being run by Norman’s former/current students)

Ton: As JA mentioned, I got into BJJ through my college Judo class. I loved Judo as a sport and whenever I came back home to Bohol, me and JA got to roll around a bit in our backyard. It was a few months into 2008 when he got into BJJ in Cebu under Norman Go. They probably did a good job there in Cebu because when we rolled again he was already beating me up in the Newaza aspect. I thought that maybe BJJ was more effective and then decided to join up under Prof. Ali Sulit’s newly formed VPF team. Under VPF, I got to compete in several tournaments including the first ever Rollapalooza. However, roughly two years into training, I suffered an orbital bone injury during training that prevented me from getting back on the mats. This mixed in with starting a new job far from the VPF gym made it difficult for me to get back to training full time when I did recover. However BJJ would always be in the back of my mind and after four years of working a corporate and sales job in Manila I decided to come back home and join my brother in teaching BJJ in Bohol. 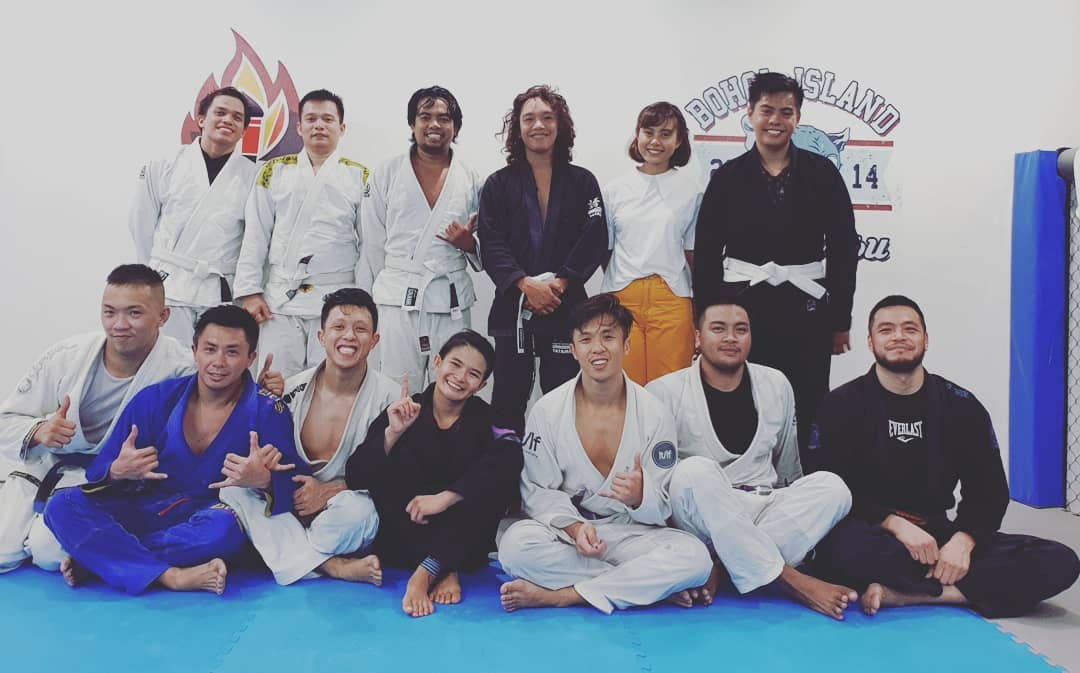 BJJASIA:  How did BJJ in Bohol begin?

JA: There are really 2 parts to this story, I’ll try to make the first part as short as possible. It was 2012, when I decided to settle back in Bohol after studying and working in Cebu for some time. There was no BJJ scene in the Island and I had some money saved up from my short work stint in Cebu. I decided to ask my mom if I could use an old runned down house we weren’t using as my first actual gym. I bought mats just to fill a little living room area around 25 sq mtrs and renovated the place. I opened shop and had around 10 people slowly showing up to classes. My brother (Ton) was still based in Manila back then so I ran everything by myself. Fast forward some months into operation, my family decided to take a short trip to Manila to visit my brother. A few days out of town, and I had no one to leave the gym with and basically having no financial capacity back then to hire someone to watch the place. I just decided to lock everything up and told my students to take a week off training. When I got back, it was to my dismay that the entire house got ransacked. All the mats and exercise equipment gone, the electrical wirings got ripped off the walls as well. There was nothing I could do but report it to the police.

The second part started from 2012 to 2014 I was hopping around karate, aikido and amatuer MMA gyms just to get my BJJ fix on the Island. And since the closest legit BJJ gym was located in Cebu, on the weekends I would ride a boat 2 hours going there and 2 hours going back just to be able to train with higher level guys. Around mid 2014, I got a call from a former student of mine that some Blue belt from NY moved into Bohol and was looking for a place to train. That’s when I met John Chan, he now runs BIJJ together with me and Ton. Quite frankly if it wasn’t for his enthusiasm to restart the BJJ scene here, BIJJ would probably wouldn’t be here as well. He negotiated a time slot from a local taekwondo gym here and we started off not asking fees, really it was just to spread the art here on the island. 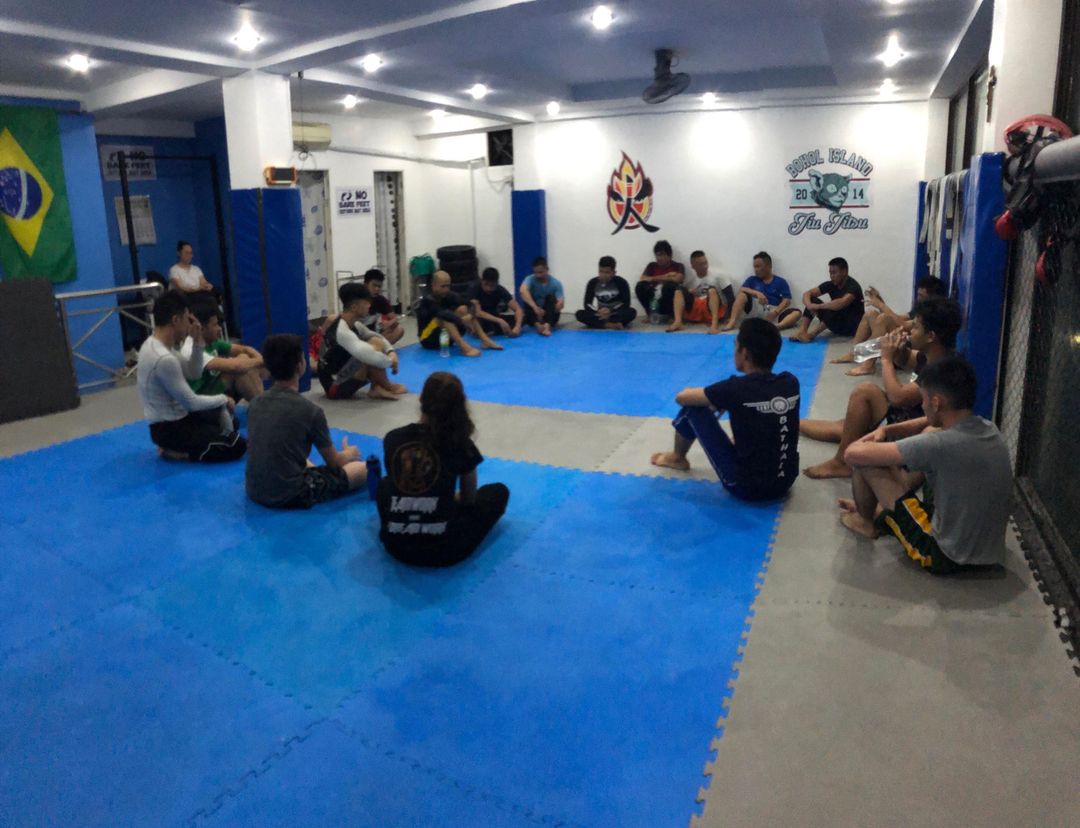 BJJASIA:  How many people do you have in the group so far?

Ton: Looking back then, we had around 4-10 people showing up for months around that time. Although the numbers were varying a lot we finally figured it was because our time schedule wasn’t as available to those who wanted to train part time. We were given only around 2 days a week at  the taekwondo gym, so around 2017 we decided to rent a commercial space in the city center and now anyone can train BJJ from Mon-Fri & Sunday open mats. Since doing that, we currently have close to 50 students. Although they don’t train together all the time (normal classes are around 15-20 people). The times people do decide to drop in one class it’s quite challenging to fit them all now in 60 sq. mtrs of mat space. 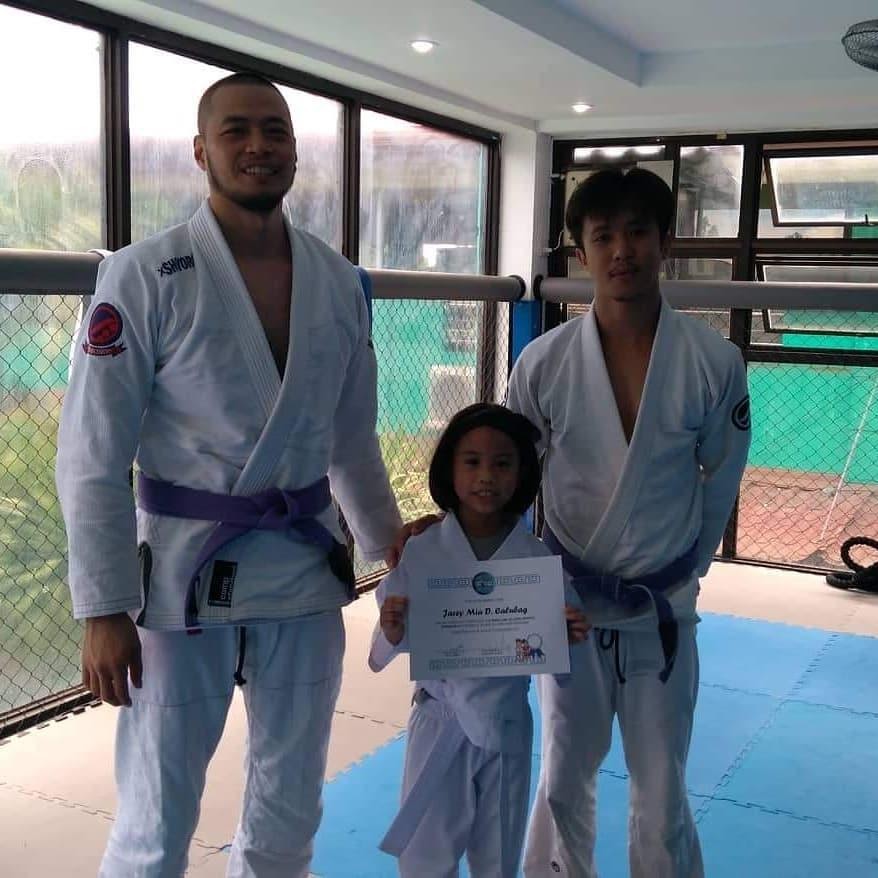 BJJASIA: What do you think makes BJJ in the islands different?

JA: The BJJ scene in the Philippines is quite unique. Since we are made of around 7,100 islands, each island has its own culture. Much like in BJJ where each team has its own culture, you can really tell the culture of the place can rub off on how the people approach training in different gyms here. In Bohol, we are a very laid back touristy island. I was so used to being more strict in implementing attendance to class coming from a bigger more competitive team setting in Cebu. However, I found it counterproductive to force people to commit to a strict training schedule here, things are just slower here. They train because they just love the art, not because there’s a competition in 4 months. There’s more of a family vibe here, it’s not a business setting where people need to pay monthly dues on time, everyone helps each other to improve and when competition season does come they do their best to help those who want to compete. 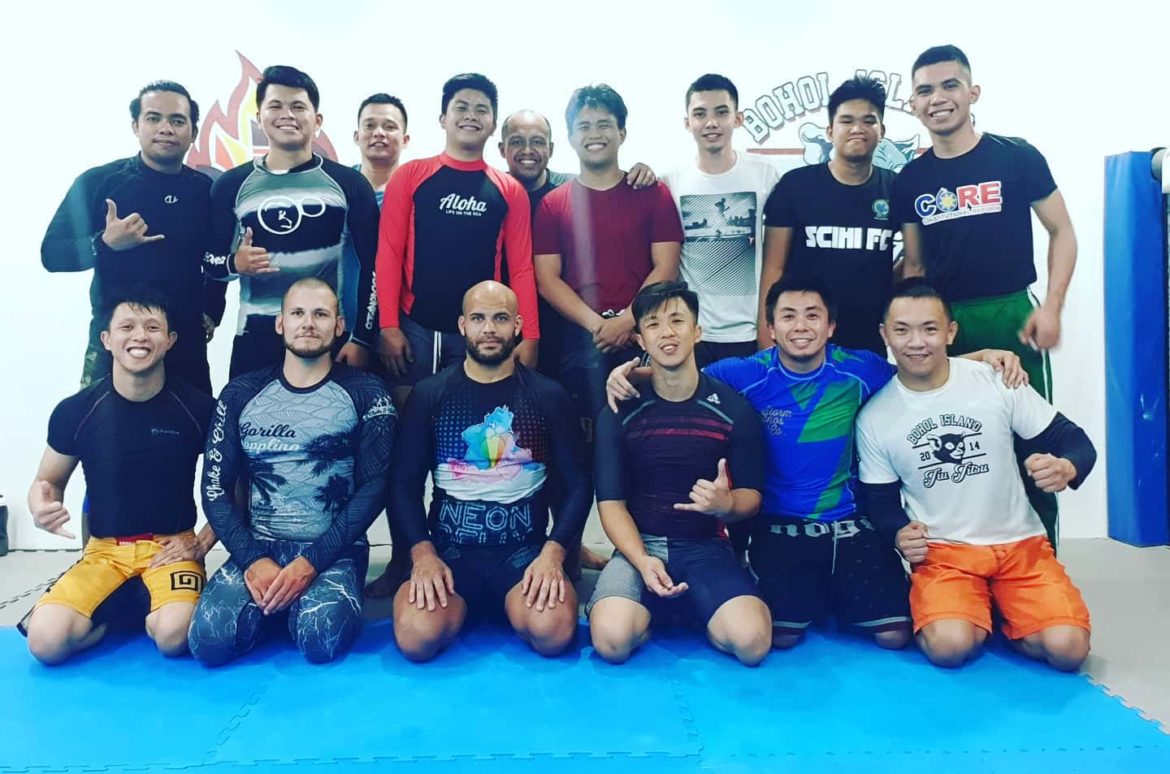 BJJASIA:  Who have been the special guests you have hosted in your paradise?

JA: Since we are a very touristy island, we tend to have random people just drop by and train. Some days you get a blue belt from NZ, or a purple belt from Israel, or a black belt from Germany. We have hosted quite a number of black belts that just dropped by and trained over the years.

Some notable names are: 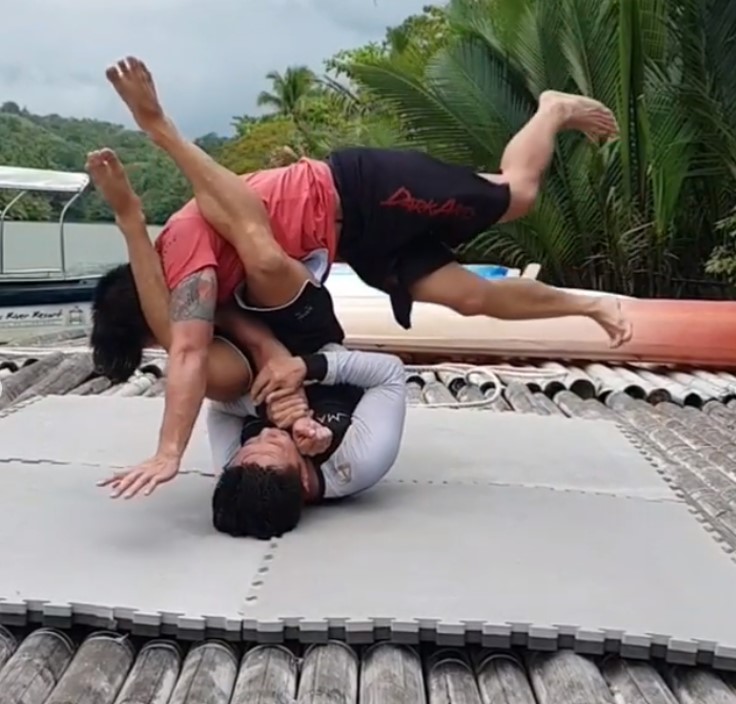 BJJASIA: Let’s talk about Bohol! Aside from BJJ,what can Jiujiteiro tourists look forward to when coming to the island?

JA: As a travel destination you can find so many things to do on our Island, considering we are the 10th largest island in the country. We offer amazing beaches, world class diving and marine habitats, inland we have spectacular countryside and magical rivers, waterfalls and cave pools. The island also boasts rich history as you can see in our century old churches and parks. 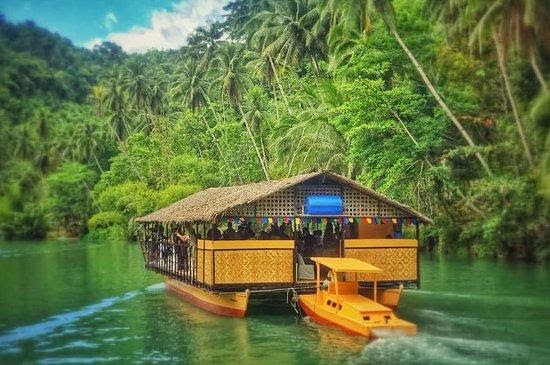 BJJASIA: Can you share with us how people can learn more about your group? IG page? FB page?

No images found!
Try some other hashtag or username